No Use for a Name is one of the core bands on the Fat Wreck Chords label, and with the release of The Feel Good Record of the Year (no doubt a somewhat tongue-in-cheek title, as is the personality of the record label and band itself) it is evident that despite the dissolution of other major punk bands there are some that can still be relied on. From the characteristic tracks ?Under the Garden? and ?I Want to be Wrong,? the entire record is like a comfort blanket for people like me who have always had this band in the background of their lives.

?Under the Garden? is the classic type of No Use song:

?Ontario? takes the pace a step down, with piano accompaniment and a very Ben Folds feel to the composition, but incorporating lyrics that are reflective of the band’s earlier hits like ?Justified Black Eye? and the cover single ?Redemption Song?:

Nothing could prepare you for that rain

When You’re living for every minute

Makes the moment seem further away

No words can repair this

So why do people still talk about faith

When It’s proving to be nothing great

There are some music fans and critics who think that No Use has been a somewhat characterless face within the industry, but I think that The Feel Good Record of the Year proves the band is a real force within the music world and is very much deserving of its pedestal within Fat Wreck Chords. The musical composition is, as always, flawless and non-conforming to any demands of the genre, punk or otherwise.

The record has raised my level of respect and appreciation for No Use for a Name, and actually caused me to question my previous indifference to a group of musicians who are able to write such touching songs with longevity; a feat not often accomplished by the most promising of artists. 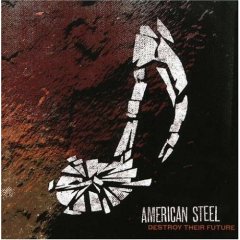 Music To Eat Lunch To – American Steel: Destroy Their Future