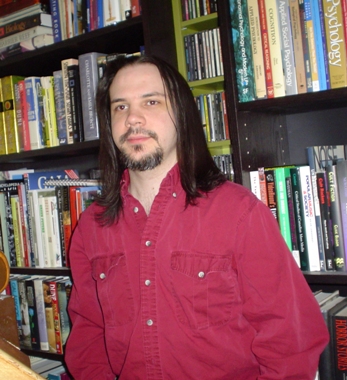 This week’s profile focuses on Karl Low, who is returning to the AUSU Student Council for a second term. Karl, an English major, feels that distance learning results in better understanding of the material, but he’s aware of, and speaks candidly about, the challenges that accompany studying by distance. He also explains how his work on the student council means advocating AUSU member interests in the larger educational community.

Karl was initially attracted to Athabasca University because it offered him the opportunity to finish his education without feeling out of place among younger students. He had begun studying at the University of Calgary after graduating high school.

?First year at U of C, I nearly flunked,? he says. ?In high school I slept through classes and pulled straight A’s. You can’t do that in university.? He withdrew during his second year and started working, but kept further education in mind.

?I knew that one day I’d have to finish up my education if I wanted to get beyond bottom-end jobs,? he says. After getting married, he tried re-enroling at the University of Calgary, but felt it wasn’t a good fit because unlike most in the classroom, ?I was an older student,? he explains.

Both Karl and his wife, who was also looking to complete her education, began researching options.

?That’s where AU . . . came in,? Karl says. It was less expensive than other possibilities?a bonus since they were concerned about student loans. They wouldn’t feel out of place as the oldest students in the classroom, since degrees could be completed from home. And while studying, ?we could actually work and get things done,? Karl says.

Karl and his wife are currently AU students. Although they’ve never taken courses together at the same time, it has been helpful having a spouse who understands a distance student’s challenges. ?We both intend to take a French course . . . together one day,? Karl says, ?but we’re still working on getting our own degrees first.?

Initially, Karl had enroled in the B.A. Information Systems program. However, ?the [Information Systems] courses . . . just didn’t hold my interest,? Karl says. ?I’ve been involved with computers since I was . . . three or four . . . they were omnipresent.?

He found English much more attractive, and eventually he switched to that major. ?I’ve always enjoyed and been good at writing, probably because I spent so much time daydreaming and developing stories in my head,? Karl says. ?Writing just puts them out on paper.?

Karl feels that studying via distance is an inherently better way to learn. ?I know when I finish my essays or exams that I did well strictly because I know it, not because I’ve been pulled along by a timed set of assignments and essays,? he says. ?At AU . . .there’s no obvious regurgitation because you’ve got nobody prompting you each day.?

That same self-starting focus makes distance education challenging, however: ?With other things going on . . . It’s very easy to get caught up in the idea of ?I’ll do coursework tomorrow?,? Karl says. ?It’s never tomorrow, is it??

Self-motivation is a daily struggle for him: ?Everyone knows the rote answers?just do a little each day, get into the habit, get a special place . . . that doesn’t have distractions,? he says. ?But if knowing the answers was the same as practicing them, it wouldn’t be a problem in the first place.?

What does help is to think about his long-term goals: ?I know that to get . . . there I’ve got to finish what I’m doing here,? Karl says. Accountability is another resource: ?Getting other people to simply ask you each and every day, ?So what did you do on your course today? How far along is it?? . . . can help as well,? he says.

After he completes his education, Karl hopes to work for Athabasca University as a tutor or faculty member in English or information sciences. ?Given the oncoming shortage of professional academics That’s been predicted . . . it struck me as a good area to focus on,? he says. ?Not to mention that the whole idea of ?academic freedom? really appeals.?

To that end, he hopes to enrol in a graduate program after completing his B.A. ?The MAIS [Master of Arts in Integrated Studies] really appeals to me as it might give me a way to unite . . . information systems with English,? he says.

In the meantime, Karl is busy with another aspect of AU?its relations with external interests. During the previous AUSU Student Council term, Karl served as Vice-President of External Affairs, a position that involves representing AUSU’s concerns to interests outside the school, as well as keeping the council up-to-date on external issues affecting students. It’s a considerable task, given AUSU’s widely dispersed membership.

?Financial issues generally take priority for external, as they affect everyone,? Karl says. For example, when one province held a public consultation on student finance reform, Karl advocated for a ?student funding system that is more appropriate to our members,? he says. ?AUSU has a higher proportion of part-time students, for instance, and a higher proportion of first-in-the-family students, which tend to be more averse to taking on large debt loads like student loans . . . in any revamp of their student finance system, I didn’t want those groups to be left out in the cold.?

?The other big issue for our students is degree recognition and transferability,? notes Karl. Although AU degrees are generally recognized, course recognition is a different issue. ?[It] varies so much from institution to institution,? he says.

Despite his homework, council activities, and plans for the future, Karl hasn’t forgotten about his interest in writing. Although he’s been too busy to do much creative writing?It’s mostly ?policy documents, letters, and press releases . . . horribly practical [stuff]?, he says?he keeps an ?ideas? folder with notes, even one-line sentences, that someday might become inspirational fodder. ?I keep on intending and dreaming,? Karl says.