Columns
The Voice
The Mindful Bard – Robert Alter, The Book of Psalms: A Translation with Commentary

Book: Robert Alter, The Book of Psalms: A Translation with Commentary

?Let but goodness and kindness pursue me all the days of my life.
And I shall dwell in the house of the Lord for many long days.?

Psalm 23, The Book of Psalms: A Translation with Commentary, by Robert Alter

“What I have aimed at in this translation?inevitably, with imperfect success?is to represent Psalms in a kind of English verse that is readable as poetry yet sounds something like the Hebrew . . .”

Introduction, The Book of Psalms: A Translation with Commentary, by Robert Alter

In a meadow near Bethlehem a handsome, ruddy shepherd boy played the harp and composed songs while minding his father’s sheep. At one point he played his harp to comfort a mad king. Later that boy became a king himself. He continued writing songs, which were later compiled into the book we now know as Psalms.

It ain’t necessarily so, says Robert Alter in the introduction to his translation of Psalms, but he is only citing a jumbo pile of credible scholarly evidence; the book that became one of the most prized and oft-read collections of poetry in the world and that formed part of the canon of both the Judaic and the Christian religious traditions was written by any number of poets, who later attributed them to King David.

Yet somehow the legend of the shepherd king and his exploits is inseparable from Psalms. Psalms without King David is like 1001 Nights without Scheherazade, or Canterbury Tales without the Nun, the Miller, or the Wife of Bath. Psalm 3, for example, would fall flat without the staggering backdrop of the story of David’s struggles with Absalom. The same can surely be said of Psalm 51 and the story of Bathsheba.

Alter has not utterly excluded David (which would be impossible without hacking away a slew of introductory verses), yet for him the mythology takes a back seat to the form (the ancient Hebrew poetic mode Hrushovski calls ?semantic-syntactic-accentual parallelism?) and the intended message of the original texts.

One shift from the major translations is the doctrinal distinction signified by the use of the word ?rescue? and ?rescuer? in place of the more commonly used ?save? and ?salvation.? 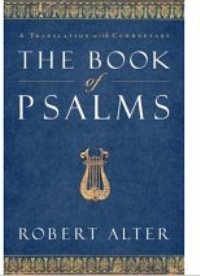 Alter felt that the words ?save,? ?saviour,? and ?salvation? were too theologically loaded to express what had been in the minds of the poets and early scribes, who would not have had a sense that a post-death paradise lay in wait for them as recompense for the earthly suffering they so eloquently described. The Hebrew afterlife was something quite different.

The Hebrew word elsewhere translated as ?forever? means long life, and the afterlife is here presented as a dark place in which human beings are helpless to praise and serve their creator. Prayers that in the King James appear to be petitions for apple-pie-in-the-sky-by-and-by are rendered by Alter as prayers for here-and-now health, safety, freedom, dignity, and the privilege of daily communion with God.

It is tempting to accuse Alter of banishing the numinous from Psalms, yet an intensity of spiritual fervour remains; there is a mystical personal connect with the deity, a link that appears to transcend all the worldly cares and desires that the psalmists describe. The deity is portrayed as the source and sustenance of our highest personal qualities, notably including compassion, understanding, and fairness.

You can also observe a progression from a basic to a complex and refined spirituality, e.g., from a desire for vengeance to a merciful tenderness; from a desire to protect oneself and one’s own to a desire to help the weak; from ?lead me not into temptation? to ?test me and try me?; from a dread of a warrior god to a profound trust in a God of love; and from a dependence on personal righteousness in the pursuit of divine favour to an acknowledgement of personal weakness and the joy of receiving mercy and forgiveness.

What emerges is a clearer, purer book of Psalms in which the relationship with the deity is pragmatic yet mystical. In this translation Alter has released from theological bondage the sense that relationship with God is immediate, mutually responsive, and evolving.

The Book of Psalms: A Translation with Commentary lives up to 10 of The Mindful Bard’s criteria for books well worth reading: 1) it is authentic, original, and delightful; 2) it confronts existing injustices; 3) it renews my enthusiasm for positive social action; 4) it makes me want to be a better artist; 5) it gives me tools which help me be a better artist; 6) it displays an engagement with and compassionate response to suffering; 7) it inspires an awareness of the sanctity of creation; 8) it is about attainment of the true self; 9) it provides respite from a sick and cruel world, a respite enabling me to renew myself for a return to mindful endeavour; and 10) it poses and admirably responds to questions which have a direct bearing on my view of existence.

Correction: In last week’s Mindful Bard (v16 i16), the Bard noted that the authors of What’s the Use of Truth? quote ?Henry James’s dictum that we must stop believing we have an obligation to God.? In fact, it is William James the authors refer to, and the Bard apologizes for any confusion.