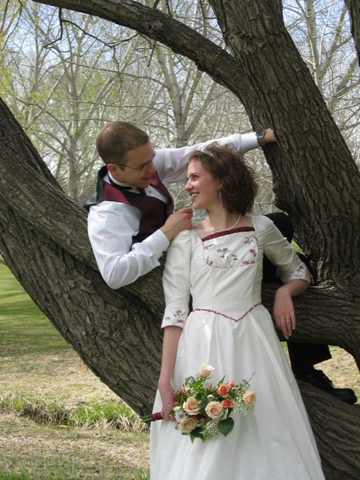 This week’s profile focuses on new AUSU Student Councillor Emily Dukeshire. Emily, a Human Services major in Athabasca University’s Bachelor of Professional Arts program (BPA), is using the BPA to enrich and build upon her college degree in recreation therapy.

She describes recreation therapy, explaining why she finds working in the field so enjoyable. She also tells why She’s glad to be part of Student Council, and explains her unique online ?office hours? for fellow students to share their issues and concerns.

Before switching to full-time study, Emily worked in a hospital as a recreation therapist, a job that involves ?using recreation and leisure to enhance well-being,? she says.

For example, at the hospital, she coordinated programs for the elderly: ?I would perform assessments and then [run] programs to meet client needs,? Emily says. ?I [ran] card games, news and views, social events, exercises, supper club, walking groups, [and] sensory stimulation.?

She adds, ?It’s one of the greatest jobs! Who else gets paid to hold parties??

Emily, who recently moved to Calgary, began studying with AU shortly after graduating from college with her two-year diploma.

?I really liked my diploma because it was . . . hands-on,? Emily says, ?but I wanted to balance that out with some more theoretical stuff.? In addition, she hoped that a bachelor’s degree would give her an ?edge in the job market,? she says. ?Most recreation therapists just have a college diploma.?

Studying independently was familiar to Emily, who was home-schooled for ?most of her life,? she says. ?I really liked the idea of AU, it fit with my learning style.?

Moreover, she enjoys its flexibility. ?I . . . love AU because it goes wherever I need to,? she says. ?My husband and I have been moving around a lot for his work and school. AU just comes with me wherever I go.?

An added bonus: AU’s BPA program allowed her to transfer her entire diploma, leaving only twenty courses remaining in her degree.

?I really didn’t want to start all over,? Emily says. With seven courses remaining, she’d like to graduate sometime next year, although She’s keeping an open mind. ?I am . . . going to wait and see how things go in Calgary,? she says. Either way, she adds, ?I want to keep working on my courses.?

Planning helps her get through classes without getting bogged down. ?I am always amazed at what I can get done when I just keep plowing ahead, doing a little [each] day,? she says. She notes: ?If I am preparing for a test, I will review a chapter a day; by the time the exam rolls around, I am ready.?

Studying by distance brings its own set of challenges, however. ?Sometimes I do miss the social interaction,? Emily admits.

However, she counters that by taking classes at a traditional university at the same time. ?With my degree I can take half the courses at a local B and M school and transfer the credits to AU,? she says. ?By the time I graduate I will have attended seven post-secondary schools!?

A more difficult aspect of distance learning is the delayed feedback. ?If I don’t understand something at a B and M school I can just ask the teacher after class,? Emily says. ?It takes two minutes, and I can continue with the project I’m working on.?

Now in her first term on council, She’s excited to be a part of it all. ?Once I started campaigning, I got really interested in the student issues,? Emily says. For example, she is looking into a textbook buyback program. ?I think [it] would save students money, and would be good for the environment?books won’t get dumped in the garbage,? she says.

She’s also open to the suggestions of fellow students. ?Because I am new, I am still learning what students? concerns are,? Emily says.

In addition to participating in the AUSU forums, She’s available in the AUSU website’s chat room on Tuesdays between 10:00 and 11:00 a.m. MST.

?I want to hear what other students think and feel,? she says. ?I think it creates a connection between council and the student body.?

Emily’s happy to be able to make a difference in the AU community. ?I think Athabasca is a great organization,? she says. ?I want to give back to an organization that has helped me to live my dreams.?