Columns
The Voice
In Conversation With . . . Gareth Jones, Lead Singer of People in Planes

People in Planes is a five-piece Welsh band known for its lush sound, spirited vocals, and sensitive lyrics. The band has recently started a tour in advance of the upcoming release (June 24) of their second album, Beyond the Horizon. The video for one track, ?Pretty Buildings? can be seen here.

Their official website can be found here, and their Myspace page is People in Planes.

We just finished the first part of our tour this week. we’re doing some acoustic shows here in the U.K., working with agents, doing a bit of industry work over the next few days. Then we’re going down to L.A. to the Viper Room, which we’ve never played before and which is steeped in history. Isn’t that the place where River Phoenix died? we’re going out there so I guess that will be the highlight of the week.

And from there we’ll be flying up to Vancouver. I’m really looking forward to getting back into Canada. I haven’t been to Vancouver for a while and It’s my favourite city.

Writing a song can happen in different ways. There’s no definite way of doing it. If Pete writes something his way of writing it is sort of jamming, being outrageous for a bit, and it builds from that. Then the guitarists and the drums thrash out the sections. I just sit down at the piano. 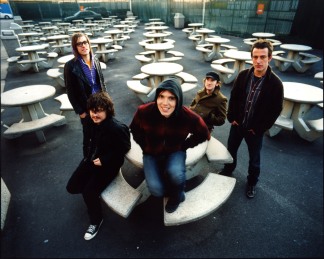 With ?Pretty Buildings? we sort of wrote half the song each. I wrote the piano verses for it.

For my verses I was trying to come up with a narrative, a story about a girl, told in a free-flowing thought process. It’s got a relationship connotation, and it goes on a journey.

Our songs tend to be less obvious but more personal. we’re really upbeat people, but we tend to write in minor keys. I don’t really know why that is. we’re really quite happy, balanced people. Maybe we should be a bit more depressed?it would be a good reflection of what we write. I suppose we’re channelling misery.

My parents are musical. My mum’s a pianist and Dad sings. In Wales they’re really big on male voice choirs with close harmonies. And we’ve all been in various bands in our home town. In smallish towns there isn’t much to do so we all played in different bands.

As for the writing, I started young and it just developed. I’m not nearly as prolific as Pete, who writes most of our songs. Pete didn’t have a family background in music except that his brother played in a band, like my brother.

The town Peter and I grew up in is Porthcawl, between Cardiff and Swansea. It’s a little town; something like 20 thousand people. There’s not much going on. You have to go 30 miles up the road to the city to do anything. It was a great town to grow up in, low crime and really safe. It’s right on the Bristol Channel. You can see across to southwest England. Back in the fifties and sixties and earlier it was a fun-fair kind of place but now It’s more residential.

Right now I live just a few miles from Porthcawl. Pete just moved to New York and John lives in Bristol. Chris and Ian are thinking of moving to New York as well, I think. There’s talk of all of us moving to New York. Even though It’s so easy to travel now I think there’s a sense that we could move forward better if we were all in the same city as our label. Everything seems to be happening in New York for us. I don’t know how flawed that logic is.

Creativity just clicks sometimes. You encapsulate emotion in what you play, I think. It’s like a spark out of the blue. When it happens It’s like channelling, although that may be a bit pretentious. You come up with something you really like and it just feels right. You can play the same chord sequence on two separate occasions and on the one time it could be the best thing in the world and on the other, not.

The only condition I require to be creative is that I definitely need to be on my own, no doubt about it. 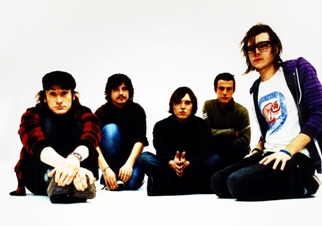 Lately I’ve been listening to Park Avenue by Plants and Animals. they’re from Montreal, I believe. I saw the album on iTunes and gave it a listen.

I was really into Neil Young and there are some Neil Young elements in it. There’s also a real hippy vibe to it. I just love it. It’s an amazing album.

I think most bands now are sitting around in vans with laptops watching whatever they can get. A lot of movies get passed around in our van. Loads of movies, television series. I like There Will Be Blood, which was incredible. Also Who’s Afraid of Virginia Woolf?

The Heart of Things

How you feel about everything does come out in your lyrics and music. we’re living in a pretty fucked up time right now, aren’t we? America is out of control, Britain is out of control. It’s a really worrying time right now, so I guess It’s in the back of your mind and influences what You’re doing. I think you’d have to be really ignorant to not be worried. It’s right there, and you have to really pull the shutters down to miss it.

You worry that something’s going to come to a head. It’s not just the environment, though That’s bad enough; there’s nuclear war, monetary problems, wealth imbalance, stealing from oil-rich countries, our occupation of Iraq and how we get away with it. It’s terrible.

I just had a child. A boy. We had a week off so some of us came home to Wales. It’s been different being away on tour with that. It’s good to be home. Wales is a fairly safe place to raise a family. Just like in Canada and the U.S., there are safe places with free and open societies. Wales is great; we grew up here and there’s lots of community feeling. Maybe That’s a luxury That’s afforded to Westerners at the expense of others. But we’ve got security. We really are lucky people, but when you have children you can’t help worry that they’re growing up in a troubled world.

In Conversation With . . . Thriving Ivory