“. . . as a rule the images of the unconscious are not produced by consciousness, but have a reality and spontaneity of their own. Nevertheless, we regard them as mere marginal phenomena.”

I’m one to jump up and take notice when Lynch puts out a new film, mainly because of the cultural significance of his work, but also because his screwed-up visions are just so engaging. Oh, and they stimulate creativity, no question.

Is the actress Nikki (played by Laura Dern) confusing herself with her character in the movie She’s acting in? Is she having a mental breakdown? Is this about the absurdity and artifice of the silver screen? Is this all one long nightmare? If so, who’s having it?

Unlike conventional action sequences, there are many things in this story that we simply don’t need to know. On the other hand, knowing wouldn’t hurt.

There is an interesting scene on the second disk involving a young Polish girl and a middle-aged Polish watch seller. They are negotiating a sale, but this is no ordinary transaction. The watches bring good luck?and the girl very much wants good luck in her life right now?but they will cost her 25 dollars (which the girl ultimately pulls from a highly symbolic shoe) and two seconds of handholding.

This watch seller is one of many terrifying images of the self in this film. The girl is in fact bargaining not for good luck but for the initiation of a process that will ultimately be meaningful and redemptive, a process summed up by a shiny timepiece. She proffers the 25 dollars but is reluctant to give of her substance; in the end her hand is clutched by force. 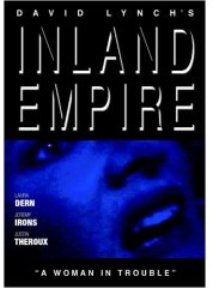 The device of the movie-within-a-movie is often a statement about reality. In this case the device is embellished by the fact that the movie Nikki is starring in now (enigmatically named No More Blue Tomorrows) turns out to be, it is discovered, a remake of a movie done years ago in Poland, one that never made the screen because of a crime committed during filming. And so the actors are being asked to relive a tragic myth in the hopes that the ending will not be tragic this time around. Sound familiar? If so, you better see a shrink.

Many scenes in this movie are readily recognizable to most of us as having nightmare content, and INLAND EMPIRE is clearly taking seriously the role of film as the dream state of a culture. Some recent dream research has indicated that dreams play an important role in the forming of memories; it is as if the sensory input of the day is slowly dropped into a series of open file folders, each image or event landing in whatever place it fits until the formation of a narrative acceptable to the ego.

?Inland Empire? describes a region of southern California. There is only one mention of the title in the entire film; some organized criminals are talking about an inland empire as if it had a physical location. We know better. If you don’t believe me, pay careful attention to the lyrics of the song sung at the beginning and toward the end of the movie.

INLAND EMPIRE lives up to eight of The Mindful Bard’s criteria for films well worth seeing: 1) it is authentic, original, and delightful; 2) it confronts, rebukes, and mocks existing injustices; 3) it makes me want to be a better artist; 4) it gives me tools which help me be a better artist; 5) it displays an engagement with and compassionate response to suffering; 6) it is about attainment of the true self; 7) it stimulates my mind; and 8) it poses and admirably responds to questions having a direct bearing on my view of existence.