Columns
The Voice
The Mindful Bard – Shut Up and Sing

DVD: Shut Up and Sing

It’s a sad sad story when a mother will teach her
Daughter that she ought to hate a perfect stranger.
And how in the world can the words that I said
Send somebody so over the edge
That they’d write me a letter
Sayin? that I better shut up and sing
Or my life will be over?

from ?Not Ready To Make Nice,? by Emily Robison, Dan Wilson, Natalie Maines, and Martie Maguire

In 2003 The Dixie Chicks are on stage at the Shepherds Bush Empire theatre in London, England. Between songs the diminutive Natalie Maines pipes up, ?Just so you know, we’re on the good side with y?all. We do not want this war, this violence. And we’re ashamed that the President of the United States is from Texas.”

The crowd cheers wildly. But when this gets back to American country music fans, widespread boycotts swing into place, Dixie Chicks performances are picketed, country radio stations refuse to play their songs, and the girls receive disparaging and even threatening letters. In one chilling scene a young woman holding a toddler snaps, ?Screw ?em!? and then demands that the toddler say it too.

The Chicks are denounced by other country performers, notably Toby Keith, who sings about ?putting a boot? in Natalie Maines’s ass, because ?It’s the American way.?

The gals consider wearing T-shirts that say ?Fuck You Toby Keith,? but this evolves into a brilliant plan to simply wear the initials F.U.T.K. and innocently pretend that they stand for benign sentiments of the wearer’s choosing. Natalie Maines claims that the initials on her shirt stand for ?Fans United in Truth and Kindness.? Fans are soon sporting the initials on their chests, one claiming they stand for ?Freedom, Truth, Unity, Knowledge,? another, ?Freedom for the United States, a Democratic Country.?

The Dixie Chicks know that this may break up the band, halt their careers, or worse. If you can remember McCarthyism it really isn’t a stretch to expect the severest of squelchings. But the crisis actually ends up helping them; this turns out to be one of those movements that rise from minor events to gather their own momentum, movements whose times have come, and that appear to generate a beauty all their own. The Chicks boldly face chastisement and in the end are vindicated. 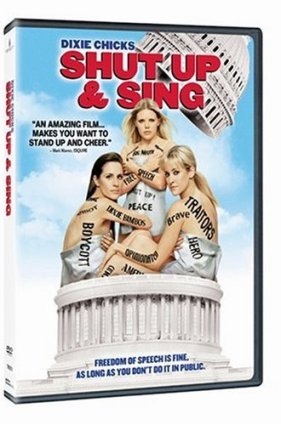 Rilke wrote, in Letters to a Young Poet, ?Perhaps all the dragons in our lives are princesses who are only waiting to see us act, just once, with beauty and courage. Perhaps everything that frightens us is, in its deepest essence, something helpless that wants our love.?

In light of recent drops in Bush’s popularity it is fitting that opposition was voiced early on by three of the most dyed-in-the-wool country girls you could ever run across. And by country I mean humble folks who live in rural areas and love friends and family and are making a distinctive contribution to a distinctive musical tradition.

Contrary to the ravings of conservatives, this group has always included dissenters, individualists, eccentrics, political activists, and intellectuals even though these are not always easily tolerated by those who consider themselves the mainstream.

Sadly, American country radio has become so dependent on the approval of political conservatives that It’s simply not free, having become a source of the kind of reverse propaganda that silences dissent and withholds important information from those who need it most.

Luckily for the Dixie Chicks and other rebels the music industry is shifting. The fact that their 2006 album, Taking the Long Way, was a financial success without the support of American country radio points to the increasing globalization of fan bases, but more notably to the pervasiveness of the Internet as a music source whose audience size exceeds that of privately owned and operated radio stations.

Shut Up and Sing lives up to five of The Mindful Bard’s criteria for films well worth seeing: 1) it confronts, rebukes, and mocks existing injustices; 2) it renews my enthusiasm for positive social action; 3) it displays an engagement with and compassionate response to suffering; 4) it exemplifies attainment of the true self; and 5) it harmoniously unites art with social action, rescuing us from both the ivory tower and slavery to someone else’s political agenda.

In Conversation With . . . Del McCoury