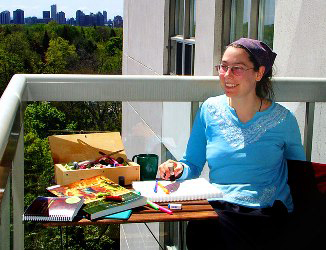 This week, we meet a first-year student who’s already presenting her historical research at symposiums.

Meghan Roberts, a student in Athabasca University’s Bachelor of Arts program, tells what sparked her keen interest in history, particularly the Viking Age. She also describes some of her research, and explains how an undergraduate student can get her research recognized.

Meghan, who lives in Toronto, is planning a double major in history and anthropology. It’s an important stepping stone to her long-term goals: to obtain a Master’s, and then a Ph.D., in Medieval Studies.

She isn’t waiting for her Ph.D. to pursue her research interests, however. ?I have a really strong interest in the Viking Age,? Meghan says.

In March, she presented a paper on Viking Age sewing tools at the Medieval World Symposium held at the Royal Ontario Museum (ROM) in Toronto. The society conducting the symposium?Friends of Medieval Studies?has subsequently asked her to do a follow-up lecture for its evening lecture series. She’s also working on a paper for an undergraduate conference in Arizona. ?It’s pretty exciting,? she says.

How does an undergrad student get her research recognized? ?You have to be very, very persistent,? Meghan says. Having connections helps as well: she submitted her abstract for the Medieval World Symposium to a person she’d already known for several years.

Sometimes, it can be difficult to overcome the prejudice favouring graduate over undergraduate research. ?I . . . talk about my work for a while before letting anyone ask me what my job is,? Meghan says. ?I tell them after they already have an opinion formed!?

However, she adds, It’s important to keep trying. ?There’s more and more interest in undergrad research now,? she says. ?Even if It’s a lot of long shots, one will eventually hit!?

Some of Meghan’s recent research centres on Viking Age sewing.

?Clothes were often gifts given by kings,? she says, ?but we don’t think enough about who made the clothes.? 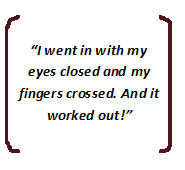 When you begin asking questions about the daily lives of women in Viking times, it opens up a whole new world?one ?that is easy to ignore for a lot of historians,? Meghan says.

For example, many aren’t aware that ?sewing tools were a status symbol for women of the time . . . [women] wore sewing tools as part of their jewellery,? Meghan notes. ?Good sewing was one of the ways one really made one’s name.?

Meghan’s fascination with history began several years ago when she was a film student. ?I was working on a screenplay . . . a period action swords-and-sorcerers kind of thing,? she says. ?It . . . quickly turned into an interest in real history.?

It was learning about the Icelandic legal system that sparked her interest in the Viking Age. ?It’s one of the earliest democracies in Europe, and It’s got some really interesting features,? she says.

Meghan first began studying with AU because of its open admissions policy. ?I went in with my eyes closed and my fingers crossed,? she says. ?And it worked out!?

Although she started with just one course, she succeeded enough that she enroled in two more. Now, as of June, she’ll be taking three courses simultaneously, with three already finished.

?I definitely prefer distance ed to classrooms,? she says. ?I have a lot of trouble listening to information,? she adds. ?I get less frustrated by my [distance] courses . . . which means It’s easier to knuckle down.?

It’s also easier now that she has control over when and where she studies. ?I especially like coffee-shop hopping,? Meghan says. ?I think the fresh air wakes me up a bit!?

Meghan’s long-term goals help keep her motivated, even when homework becomes burdensome. ?I find schoolwork extremely difficult,? Meghan says. ?I have to spend a lot of time on courses.?

She adds: ?There are times I wonder if It’s actually worth it. But this is just one of those things I’ve got to do!?

When She’s not studying history?for school or on her own?or participating in Renaissance dance, Meghan works as an illustrator.

?I ?translate? complex texts?[like] a bill of rights, a self-help book, a quality of life questionnaire?into pictures for people who have lost their ability to use and understand language,? she says.

And although she enjoys her job, her real dream is to pursue more historical research. ?I want it all!? she says.