Most of us have seen posters for this popular fundraising campaign. Participants have come up with a number of catchy names?Shave for the Cure, Shave to Save, Cops for Cancer, and more.

Whatever It’s called, the goal is the same: to shave your head and collect donations to help in the fight against cancer.

Firefighters, police officers, students, teachers?people from many walks of life can be counted among those who have shorn their locks in an attempt to make a positive difference.

Stacey Fearnall, a 36-year-old waitress in Owen Sound, Ontario, is no different. In fact, she managed to raise over $2,700 dollars for the charity Cops for Cancer by shaving her head. But there is something different about Stacey’s story: her employer.

Stacey worked (among other jobs) as a waitress at a local restaurant. But when she showed up for work after shaving her head for a good cause, she was given an ultimatum. Either put on a wig or go home. Stacey chose to go home.

Dan Hilliard, owner and chef at the restaurant, defended his actions to reporters, saying his restaurant ?has certain standards.? Among them are prohibiting male staff from wearing earrings, and requiring employees to ?keep their hair at a reasonable length.? According to the Toronto Star, Stacey will be allowed back to work once she grows her hair in.

We won’t even get into the ambiguity of deciding what’s ?reasonable.? Should waiters be allowed to shave their heads, a popular style in hot weather? If so, why should it be different for waitresses? What if someone is naturally bald? Should they be discriminated against by an employer? And in the food industry, where long hair can be a concern, isn’t no hair at all the most ?reasonable??

While most of us fret about a bad hair day or whether our roots are showing, Stacey and others like her are willing to shave their heads completely; to endure good-natured ribbing from those who know them, and, the world being what it is, likely put up with some less-than good-natured stares or remarks from those who don’t.

In defending his position, Hilliard also told reports that some customers agreed with him, saying they would have been ?appalled? to be served by a bald waitress. We can quibble about what’s ?reasonable,? Mr. Hilliard, but what’s appalling is that a trivial issue like a bald head was more important to you than a positive, compassionate gesture.

But perhaps the most appalling thing of all? That a person would be penalized for appearing, bald head and all, to be someone who cares. 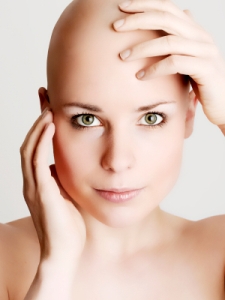