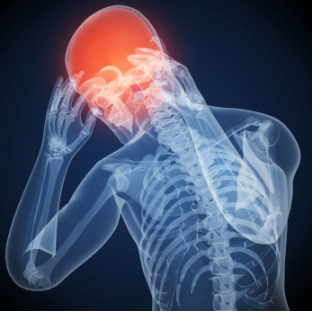 Migraines are described as extremely painful, throbbing headaches. They can last from a few hours to a few days and can occur daily, monthly, or sometimes disappear for years at a time. Estimates suggest that 15 per cent of the population suffers from migraine headaches and three times as many women as men experience migraines.

These are the type most people experience. Symptoms include throbbing pain on one side of the head, and the pain becomes worse with normal movement. It may include nausea, vomiting, and sensitivity to light and sound.

These migraines are preceded by an aura, usually occurring 30 minutes before the onset of the headache. Symptoms of an aura include blind spots, halos, flashing lights, and distortion of objects. Symptoms may also include tingling and numbness in the fingers and hands.

Migraines are caused by changes in the blood vessels in the brain. They are the most common condition presented in hospital emergency rooms. Certain foods can trigger migraines in individuals who are predisposed to this condition. Food triggers can include chocolate, cheese, alcohol, and some food preservatives such as MSG. Emotional stress may also bring on a migraine, as well as physical stress. Smoking and birth control pills also appear to increase the incidence of migraine headaches.

Diagnosing migraines is difficult and is based on the patient’s description of symptoms to their physician. Additional tests may be needed if other conditions are suspected.

Treating migraines can also be extremely difficult. The first place to start is with over-the-counter medications such as ibuprofen or ASA. If these are unsuccessful, a prescription may be obtained from your doctor.

Prescription medications are intended to stop the headache when it begins and are called triptans. Triptans work specifically on the serotonin in the brain. These medications include Sumatriptan (Imitrex), Zolmitriptan (Zomig), and Eletriptan (Relpax).

If relief is not achieved by triptans, narcotics or barbiturates may be prescribed. Most doctors do not like to prescribe these drugs as they may become habit forming and should only be used occasionally. Examples include Tylenol with codeine and Fiorinal.

Once these headaches are under control the prognosis is good as migraines do not cause long-term damage to the body. For more information on migraines, visit the eMedicine Health website, the National Headache Foundation, or WebMD.