Columns
The Voice
The Mindful Bard – Confessions: An Innocent Life in Communist China

Throughout his life in China, in response to some perceived thought crime against the state, Kang is ordered to write confessional essays. On one such occasion, he muses:

?By then I was an old hand at the confessional essay format. I would string together a series of exaggerated clichés, glossing over offenses wherever possible. Then I would attach meaningless labels to the misdeeds that I could not side-step and conclude with a self-reproach and a promise to do better.?

You may be tempted to see this memoir as just another opportunity to cluck and shake your head over communist atrocities and to thank your lucky stars you live in a democracy. But if you are a creative, independent thinker, you will find much common ground here.

From pressure to study science instead of humanities to the keeping of clandestine diaries to ubiquitous propaganda, many a circumstance in Kang’s life resonates with a similar experience of thinkers in the West. Even though we live in what is generally believed to be an open and free society, there is sometimes a price to be paid for being open. Airing nonconformist views about politics, religion, race, feminism, and prosperity in any culture is to some extent a risky venture. 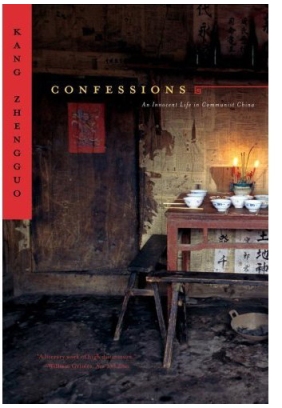 I’ve never been forced to work in a brick factory or been publicly beaten and yet I have often been silenced, ridiculed, robbed of freedom, denied jobs, lost jobs, and sold short for standing my ground on some divisive issue or even for failing to be sufficiently enthusiastic about widely held beliefs. I have watched the same happen to others. And I have often noted the kowtowing and evasive language of those whose material success depends on mechanically currying the favour of those in power.

And yet there are glaring differences between my experiences and those of Kang, the main one being communist China’s maniacal, erratic enforcement of subjective interpretations of Marxist ideology.

Another contrast is in attitudes toward literature. My greatest fear as a writer is that my outpourings may never be read, but in Kang’s world, diaries, personal letters, and even marginalia are considered so significant that you have to go to great lengths to keep them from falling into the wrong hands.

In a twisted way, totalitarian repression forms an incubation zone for writers, a negative enabling of talent and effort. It’s not something Western writers might trade freedom for, but it is something. And yet although we should assume that much excellent writing was produced in China during the Mao years, little literary writing has survived the government’s ruthless purges.

Kang is both threatened and redeemed by his reluctance to deceive as well as by his fear of being annihilated as a thinking individual. His cultured, middle-class family background, considered undesirable by the state, grants him continuity with Chinese classical literature, Buddhism, and traditional values.

It is clear that the Zhengguos? pre-revolution culture is a source of strength and solace for Kang during the Mao years, and that Kang gains a measure of self-esteem and objectivity from classical literature. But it is these old things that are always under attack by a state which would make all things new.

Confessions lives up to five of The Mindful Bard’s criteria for books well worth reading: 1) it is authentic, original, and delightful; 2) it confronts and mocks existing injustices; 3) it renews my enthusiasm for positive social action; 4) it gives me tools enabling me to respond with compassion and competence to the suffering around me; and 5) it harmoniously unites art with social action, saving me from both seclusion in an ivory tower and slavery to someone else’s political agenda.