Columns
The Voice
The Mindful Bard – The Great Debaters

?How does it become a man to behave toward this American government to-day? I answer, that he cannot without disgrace be associated with it. I cannot for an instant recognize that political organization as my government which is the slave’s government also.?

Henry David Thoreau, ?On the Duty of Civil Disobedience,? 1849

In a scene from The Great Debaters, a farmer drives his horse and wagon past an old shack in the Deep South. A massive billboard shows a happy white family in a car. Above the ecstatic faces the dispatch ?World’s Highest Standard of Living? recalls the propaganda slogans of communist China during the disastrous series of agricultural experiments deemed The Great Leap Forward, during which untold numbers died of starvation.

The Great Debaters is a salient reminder that the things about America that make the heart glow are not, nor have they ever been, universally available to Americans. One difficulty with political conservatism (and the marketplace it supports) is that it depends on the existence of an elite, therefore part of its mandate is to protect that elite at all costs.

One way for minorities to combat the injustice endemic to conservative societies is to create a new elite with which the old elite is compelled to compete for power. This is precisely what was accomplished by numerous African-American universities in the United States in the generations following Abolition.

It is important to take note of the stream of thought passing through the historical epoch on which this movie was based, a stream that continued on to nourish the civil rights movement. It is impossible to trace the beginnings of ideas about freedom and justice because we cannot find an era in which these did not exist, yet very specific responses were made by Western thinkers to the particular denials of freedom that reached their zenith in the industrial revolution. 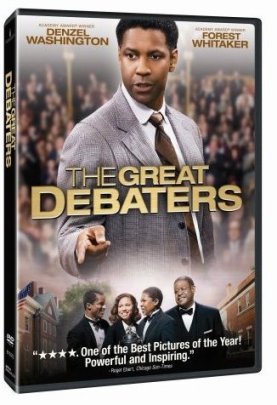 There were, for example, the anti-slavery poems of William Blake, ?On the Duty of Civil Disobedience? by Henry David Thoreau, and The Kingdom of God is Within You by Tolstoy, which powerfully influenced the Christ-based pacifism of Gandhi. The works of these thinkers were all made available to black students in the United States as a means of enabling them for the freedom their country so ardently and hypocritically promised them.

It was Gandhi who showed Martin Luther King Jr., then on the threshold of accepting violence as the only way out of the African-American plight, a central meaning of the teachings of the very master to whom King had surrendered and Gandhi had not. This contact was key in making the American civil rights movement one of pacifist conscientious objection.

In your quest for self-expression you must not forget that you are a wounded person living in a broken world. It is tempting to succumb to the world’s tender blandishments and pretend that all’s right, but for culture makers this can lead to attempts to anaesthetize inscrutable pain with substance abuse and other forms of self-abandonment. More important, social progress and healing depend heavily on the brave selflessness of culture makers. Use your gifts, if for nothing else, to speak for those who cannot speak for themselves.

The Great Debaters lives up to eight of The Mindful Bard’s criteria for films well worth watching: 1) it confronts existing injustices; 2) it renews my enthusiasm for positive social action; 3) it gives me tools enabling me to respond with compassion and efficacy to the suffering around me; 4) it makes me want to be a better artist; 5) it displays an engagement with and compassionate response to suffering; 6) it inspires an awareness of the sanctity of creation; 7) it is about attainment of the true self; and 8) it poses and admirably responds to questions which have a direct bearing on my view of existence.