For working mom Carol Poszgai, obtaining a bachelor’s degree is so important that She’s made time to do so even while raising three toddlers.

Carol, now in her final semester of Athabasca University’s Human Resources and Labour Relations post-diploma program, explains how her long-term goals are helping her combat the temptation to procrastinate.

Carol began studying with AU several years ago after earning her three-year diploma from Georgian College in Barrie, Ontario.

?I . . . wanted to have a more specialized degree,? she says. In college, she had taken primarily business administration; although her interests lay more in the human resources area, there was no HR program available. ?I started working after college, so I didn’t have time to go back to school,? Carol says.

That’s where AU fit in.

?I loved the idea of studying on my own time,? Carol explains. She also loved the fact that the post-diploma program took 66 of her diploma credits, leaving her with only eight or nine courses needed to complete her bachelor’s degree. Since then, She’s been working slowly and steadily on her remaining requirements.

Now graduation is just around the corner, and Carol will be starting her final two courses in August. Her plans include finishing by Christmas or January at the latest, but She’s become so anxious to finish, she thinks she might sneak a look at the books before the course start date. ?I can’t wait!? she says. 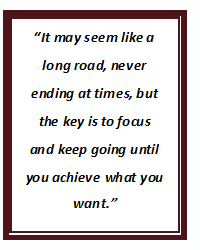 Studying with AU has been a ?good choice,? Carol says, but it hasn’t been easy. Being a mother to a three year old and one-year-old twins means that her studying time is limited.

When she began with AU, before the twins were born, ?it was easy then,? Carol says. Now, her main study time is limited to when the children are in bed. ?I find that I either go to bed a bit later or I get up earlier,? she notes.
Despite this challenge, She’s forged ahead.

?Last year . . . I decided for sure to complete that degree rather than keep postponing it,? she explains. The time was right: ?I was home with the kids anyways,? Carol says. ?Busy or not, I just wanted to finish!?

This drive to finish helps keep procrastination at bay. ?If I waste more time then I will not finish on time,? Carol says. ?I really want to get the degree!?

Her advice: students should keep their eyes on their long-term goals. ?When you feel like there’s no way you can continue, just think of how much better you will feel when you have a degree!? she notes.

Although she says It’s been challenging, Carol feels her studying has been important for her own personal development.

?I had to do something for myself,? she says. Now, She’s anxious to get some work experience in the human resources field after studying it for so many years. While her bachelor’s degree can only help in her career plans, she also recently began a part-time job as an HR assistant.

Another reason She’s looking forward to finishing is the opportunity to spend more free time with her children.

One thing she doesn’t miss is the traditional classroom environment; in fact, she prefers AU’s self-paced format.

?I prefer to be on my own to study,? she says. ?I think I get more done, and I can go at my own pace; I don’t have to worry about getting behind schedule or catching up to others.?

The difference was obvious most recently when she took a local classroom-based French course. ?I couldn’t concentrate as much . . . and it was long,? she says. ?I [didn’t] like the set schedule.?

Working toward a degree may require some sacrifice, but Carol feels that the end result is worth the struggle.

?I don’t regret . . . studying with AU,? she says. ?It may seem like a long road, never ending at times, but the key is to focus and keep going until you achieve what you want.?