Articles
The Voice
Life Amongst the Bougainvillea 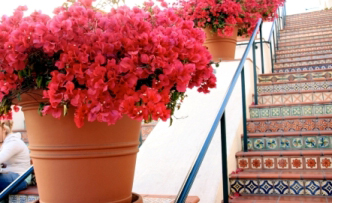 In Tegucigalpa, summer lies over the palm-shrouded streets like a blanket some torpid god has thrown carelessly upon the slovenly city.

The courtyard’s metal gate crackles when opened. It’s early in the a.m. The day’s heat will build, until my nostrils fill with a metallic smell.

I hear the water vendor’s groaning cart roll downhill toward the creek at the bottom of the ravine, where the mule will push his muzzle beneath the water’s surface and drink.

The night watchmen sit outside the tiendita where they sip Coke and watch the gringos pass by in the morning light. I hear the church bells of Santa Maria call the faithful to Mass. A tiny, yellow taxi traverses the cobblestones and spews a cloud of noxious fumes that hang in the still air.

Over the mountains north of the city I see storm clouds rising. The rainy season is here. It’s raining up there in the mountains where I don’t live anymore. A silver aircraft passes overhead and banks north away from the black clouds piling up along the horizon. Foreigners heading stateside, I expect. A flock of multicoloured parrots land in the bougainvillea bushes beside the terrazzo porch and begin a cacophonous squawking.

On the cul-de-sac where I live, the casas are beginning to stir. Families are collectively shrugging out from under the lethargy of a comatose night’s sleep. The water vendor cries ?agua, agua.? On the next street over a perro barks, another answers, and the burro standing knee-deep in water brays his displeasure with the neighbourhood dogs.

Hondurans, Nicaraguans, and Miskito Indians haul their wares from door to door attempting to cadge coins from the indolent housewives who examine with practiced eyes the bananas, papayas, pineapples, and household goods for sale. The daily cycle begins anew and slowly but inexorably time slips through my fingers.

I myself am assaulted on my way home from the grocereteria. The streets are in deep shadow with darkness hovering over the rooftops. I hurry along trying to outrace nightfall. Two young men come leaping from the shadows, knock me over, grab my hat, and leave me prone amongst a scattering of broken bottles and spilt milk. Other than my cap and pride, nothing else is taken. I sit on the curb a few moments gathering my thoughts before continuing toward home.

Then, a week later, a Federale, my Blue Jays baseball cap in hand, appears at my door. My name and address are scribbled on a shred of notepaper hidden in the hatband. Those who attacked me were captured conducting a minor crime spree and when the cap was examined the hidden note came to light. I’m bewildered that an official would go to the effort to return a well-worn cap, but he’s curious.

?You have visas to live here?? asks the sargento, playing with the holstered pistol hanging by his side.

Ah, think I, reaching for my wallet: the dreaded mordida.

Suddenly, the lempira isn’t worth much anymore. How to survive on funds drawn in local currency? I see defeat in every co-workers? face. Inflation decimates savings. Property values plummet. But the cyclical nature of this country is what It’s all about. As do the rains, everything has its season. To be paranoid is to be in country; it is to go native. This is the beginning of the end.

A sad fact: as a foreigner I see things coming that I know I’ll never adjust to. I have a different perspective. There are problems that I worry like hell about. I make provisions, take precautions, and tell myself I’ll change and adapt.

Only I can’t. It’s too late. I know my time is past and that what I fear has already taken place. Suddenly my life amongst the bougainvillea is over; I miss it.

In Conversation with Patrick Woodcock, Conclusion

Life Amongst the Bougainvillea

Homemade is Better—Spaghettini with Chicken and Tomatoes