Columns
The Voice
The Mindful Bard – The New Layman’s Almanac

Dream in maximums. Hold on to the top rung until the freeze hits-
someone will be hiring. They’ll need you to plow snow, break ice.
Nothing I could say about survival would impress you.
You make soup on a gas stove that will last six days.

from ?A Guide to Chord Progression,? The New Layman’s Almanac

don’t let the title and cover design fool you?this little book is a collection of delightful experimental poems incongruously (?) packaged as an old-time almanac in the style of an era in which poems were expected to encourage and uplift common, struggling folks like us.

Jacob McArthur Mooney is a Nova Scotian poet who, refreshingly, does not try to impress the reader with a droopy-eyed sensitivity or a misty-rosey view of the poet’s life.

He displays a rare sense of solidarity with those living in pain and want, unveiling the riches of their Dickensian lives in a way that upholds their dignity. These are the reasons why I love these poems; there are a few other reasons why they’re worth reading.

Twentieth-century culture was guilty of a stigma against the employment of rules and restrictions (a reaction, perhaps, to the excessive Victorian moulding of poetry to standard forms) during the creative process. But writing without structure no more guarantees work of lasting appeal than does writing with structure. 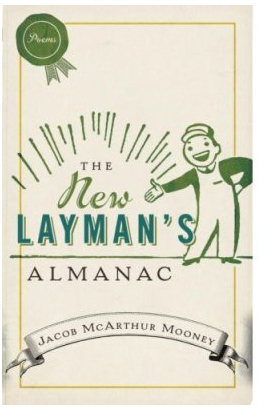 Incidentally, an interesting thing happens when structure is ad hoc and arbitrary. Far from stifling creativity, ad hoc rules enhance the creative process by opening the doors to chance. And chance, as John Cage demonstrated with aleatoric music, is one of creativity’s most generous allies.

One example of arbitrary structure is the choice of book format in The New Layman’s Almanac. McArthur Mooney groups his poems under typical farmers? almanac headings such as A Guide to Locomotion and A Guide to Rural Routes, then throws a curve with titles like A Guide to Remaining Sceptical of Your Power as a Voter.

In Appendix A each poem’s title begins with a consecutive letter of the alphabet. The poet then makes each word in the poem begin with a consecutive letter of the alphabet. You’ll be amazed at what emerges. There are also a couple of contests hidden in the pages, one of which offers as prize a poem written just for you by the poet himself. Really, how much more aleatoric can you get?

I enjoyed reading this collection more than any other recent poetry, in part because it represents a wide departure from the domination of imagism. Rube that I am, I’ve never come to appreciate the merits of imagist poetry. I’m not even really speaking of imagist poetry as a whole; rather the kind of imagist poem consisting of a parade of images couched in concrete language that is devoid of meaning and divorced from human concern.

I call it empirical poetry for its tendency to include nothing but sensory data accurately recorded. It reads like a botanist’s field notes. Check out any poem published in any major literary review in the world today. You’ll see.

Empirical poetry has become the wrinkled old don of modern poetry. Not long after it had lost the lustre of revolutionary newness it was briefly shoved aside by the Harlem Renaissance, the beat generation, the political rants and experiments of ?60s poets, and, most recently, the epic jeremiads of rap artists, but it repeatedly swayed its behemoth haunches back into a position of dominance from which it has become very hard to move.

But move it must. We’ve long assumed that 19th century popular verse, in its naive attempts to uplift and edify, fell short of being art, being overly didactic; if the more pretentious empirical poetry falls short for entirely different reasons, it falls short nonetheless. You can’t go back, but you sure can’t stay here. You can start by reading this book.

The New Layman’s Almanac lives up to nine of The Mindful Bard’s criteria for books well worth reading: 1) it is authentic, original, and delightful; 2) it confronts, rebukes, and mocks existing injustices; 3) it makes me want to be a better artist; 4) it displays an engagement with and compassionate response to suffering; 5) it inspires an awareness of the sanctity of creation; 6) it is about attainment of true self; 7) it harmoniously unites art with social action, saving me from both seclusion in an ivory tower and slavery to someone else’s political agenda; 8) it stimulates my mind; and 9) it poses and admirably responds to questions which have a direct bearing on my view of existence.

In Conversation – With Jacob Scheier, Part I

In Conversation With . . . Jacob McArthur Mooney