Columns
The Voice
The Mindful Bard – The Honeydripper

?White folks look right through me. Besides, how much mischief an old blind spook like me gon’ git up to anyhow??

Possum, in The Honeydripper

You’ve heard the blues played, sweetly, majestically, on a twangy guitar, and You’re now deeply in thrall. You have to learn to play like that.

So you go out to the crossroads at midnight and meet a dark man who’ll teach you the secrets of guitar wizardry in one mystical and transformative lesson. The price is your soul, which means you are now not only a superlative blues player, you are also a drinking, smoking, snorting, killing machine with an abbreviated life span.

In The Honeydripper this dark man (played by the transcendent Keb? Mo?) is blind and sitting on a chair on a sidewalk in a three-piece suit playing a guitar.

Only two people in the movie can see and hear him?the young newbie guitarist and the owner of the Honeydripper Lounge?and them rarely. He’s in their view just long enough to deliver a cryptic warning buried in chilling mockery. 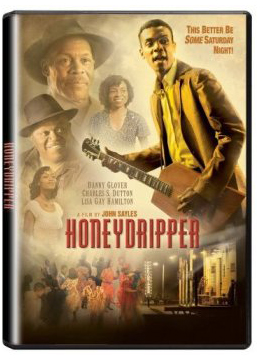 Back at university in the early ?80s, I and my white discophile friends were simply dotty about the blues. Every one of us had only recently discovered this amazing music that had been around for decades but which had been kept from our soft little ears.

(I remember trying to tell an elderly woman in my hometown about the blues only to be told, ?Oh, I know what blues music is. It’s certainly not the kind of music we would have listened to.?)

I was disappointed that our black friends couldn’t stand it. They were all into soul, Motown, disco, and reggae, which we all learned to appreciate later on.

The Africans listened to widely differing recordings from their widely disparate cultures, but they didn’t like blues either. I couldn’t see how anyone could reject a genre that was so good as music, which so illuminated the human condition and was so universal in its power to dignify human misery.

My first impression of this movie was that it was too staged, the dialogue occasionally so contrived not even these actors could save it.

I got the impression that it had started out as a piece of art and then been buried under the demands of the marketplace, as if one more brilliant treatment had been prematurely ripped from the hands of the geniuses who thought it up and handed over to writers with good box office track records. I was off by a mile.

This film has been called disappointing for a John Sayles film. I think Sayles may deserve a Pulitzer, especially if what I see in this movie was no accident.

The Honeydripper is an attempt to present a view of blues from within black American popular culture and to illustrate why it had to be retained as a raw ingredient of black (and some white) American musical genres but deliberately abandoned as the soundtrack of the leisure hour.

The cinematography is peppered with frameable metaphors: the symbolism, for example, of the elegantly fedoraed Negro artist’s head against a backdrop of rural southern squalor is all that needs saying; it is said often.

Another motif is that of the two little overalled boys playing zealously on their homemade instruments. Look for these images, and inscribe them on your consciousness.

The Honeydripper lives up to six of The Mindful Bard’s criteria for movies well worth watching: 1) it is authentic, original, and delightful; 2) it displays an engagement with and compassionate response to suffering; 3) it confronts existing injustices; 4) it inspires an awareness of the sanctity of creation; 5) it makes me want to be a better artist; and 6) it poses and admirably responds to questions which have a direct bearing on my view of existence.