Columns
The Voice
The Mindful Bard – Reginald Shepherd, Orpheus in the Bronx

Book: Reginald Shepherd, Orpheus in the Bronx: Essays on Identity, Politics, and the Freedom of Poetry

Publisher: The University of Michigan Press

There was once a poor southern gal who decided her children would escape her world of suffering by means of superior intelligence. She bought her son Reginald books before he was born and diligently nurtured his remarkable gifts during her few remaining years in the valley of the shadow of death.

Had she foreseen the significance of her son’s eventual contribution to American letters and to the world at large, the knowledge of it may have considerably sweetened those years.

Shepherd has restored the magic to the way we think about poetry; that is, he has offered us a way of seeing poetry that puts the boots to preceding theoretical models, at the same time reviving ancient modes of language. As I have quoted before in this column:

…it is the primary function of literature, more particularly of poetry, to keep re-creating the first or metaphorical phase of language during the domination of the later phases, to keep presenting it to us as a mode of language that we must never be allowed to underestimate, much less lose sight of.

Shepherd has rescued primitive metaphorical language modes from the tyranny of subsequent language modes by several means, one of which is a startlingly elegant view of the creative process. 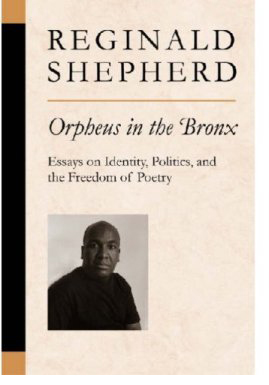 To paraphrase him (somewhat simplemindedly, I’m afraid?you’ll really have to read the book) the relationship of subject to object, of imagination to reality, of poet to thing described, is not one of reference but relationship.

He brings the idea of relationship to the fore so that instead of seeing a struggle between two poles he sees the two poles? interdependence, the quickening of their contact a gestation of meaning.

Shepherd touches in several places on his conviction that poetry does not create social change, that if you want to change the world you have to become a social activist.

don’t make the mistake of interpreting this to mean that Shepherd considers poetry insular, elitist, and lacking in transformative power; if you’ve followed this column you’d know such an argument would get short shrift here.

Shepherd insists on the avoidance of the mal fois that says one is enacting immediate social reconstruction via the writing of a poem, about liberation, say, or injustice.

But he is keen on revealing poetry’s true vitality: ?Poetry rescues nothing and no one,? he writes, ?but it embodies that helpless, necessary will to rescue, which is a kind of love, my love for the world and the things and people in the world.?

Another means by which Shepherd has rescued metaphorical language is his insistence on poetry as a necessary aesthetic form. Despite tales of poetry’s demise, of its lack of relevance in the postmodern world, of its failure to engage enough readers to give it any kind of cultural influence, Shepherd has presented enough cogent arguments in its favour to dig it out of years of stale arguments designed to repress it.

?Thus poetry continues,? writes Shepherd, ?despite the frequent reports of its death.?

Orpheus in the Bronx lives up to eleven of The Mindful Bard’s criteria for books well worth reading: 1) it is authentic, original, and delightful; 2) it confronts existing injustices; 3) it gives me tools enabling me to respond with compassion and efficacy to the suffering around me; 4) it makes me want to be a better artist; 5) it gives me tools which help me be a better artist; 6) it displays an engagement with and compassionate response to suffering; 7) it inspires an awareness of the sanctity of creation; 8) it is about attainment of the true self; 9) it harmoniously unites art with social action, saving me from both seclusion in an ivory tower and slavery to someone else’s political agenda; 10) it stimulates my mind; and 11) it poses and admirably responds to questions which have a direct bearing on my view of existence.

In Conversation With . . . Reginald Shepherd: More Than a Product of Circumstance