DVD: The Assassination of Jesse James by the Coward Robert Ford

?. . . my heroic idealism had to be abandoned, for there are higher things than the ego’s will, and to these one must bow.?

In one scene Jesse is placidly handling three snakes. He informs Robert Ford that he thinks of these as his enemies, and notes that they’re good eating. Then, without further ceremony, he beheads them with a jackknife. Their headless forms continue to writhe angrily around his arm as Ford looks timorously on.

The snake is an essential component of the symbolism of the hero myth. We see it in paintings of Siegfried, in Billy Jack, in the Old and New Testaments, in Greek mythology, and in world folklore. What does the snake mean to the hero? The answers vary, but in this story it represents the hero’s triumph and his terror, his victims and his predators. 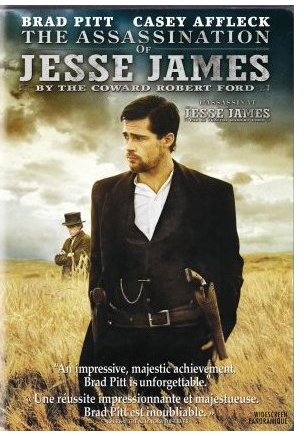 Robert Ford is a rare and fascinating kind of predator; he worships what he’s doomed to destroy, mistakenly believing murder to be a means of absorbing the power and majesty of his idol.

We saw the same quality in Mark David Chapman’s obsession with John Lennon. In a recent interview Chapman remarked, ?I just saw his face and it seemed like it all came together, the solution to my problem of being confused and feeling like a nobody.?

He could have been channelling Robert Ford. Ford too is overwhelmed by a psychological conflict and must seek out a suitable ego defence to help him cope with reality. What defence does he choose?

He chooses hero identification, building himself an inner fortress to house a hero. He knows he himself falls short, so he enters this fortress by identifying with a real live hero.

It’s a defence That’s brittle and easily shattered, one difficulty being that the hero as archetype is above law and morality. In reality, Jesse James was a despicable human being. But we’re talking about Jesse James as an archetypal outlaw, and as such he could not be held to account for any of his sins. He was above all that.

And yet there is still that jeering pest, reality. The thing about archetypes is that they are only real as ideas; they just don’t translate well into the muck of existence. The public loved Jesse James and despised the charlatan Robert Ford, but this had not prevented Jesse from living in fear and shame and dying the ignoble death to which the hero is highly susceptible. Once he was dead, this fear and shame became Ford’s inheritance.

One of the more phenomenal aspects of this film is the portrayal of Robert Ford by Casey Affleck. Word by word, intonation by intonation, expression by expression, he sculpts a heartrending depiction of the lost boy who shoots Peter Pan.

Dominik has created a complex and beautiful modern morality tale. The stark but highly evocative cinematography employs tricks (note the blurry outer edges) that carry more meaning than excitement, which may be one reason why this film has not garnered the critical acclaim it deserves. At least not yet.

The Assassination of Jesse James by the Coward Robert Ford manifests five of The Mindful Bard’s criteria for films well worth seeing: it is authentic, original, and delightful; it makes me want to be a better artist; it displays an engagement with and compassionate response to suffering; it stimulates my mind; and it poses and admirably responds to questions which have a direct bearing on my view of existence.