CFS, CASA, and CAUT gear up for federal election

OTTAWA (CUP) ? Student and teacher lobby groups in Canada want post-secondary education to be an election issue, and they are rolling out campaigns this fall to make sure it is.

?we’ll be housing an election centre on our website,? said CASA National Director Zach Churchill. ?we’ll be informing students how to vote on campus, how to do absentee voting, [and] if they want to vote in their riding back home.?

As well, he suggested CAUT would conduct ?an analysis once the party platforms are out of where [each party] stands on post-secondary issues.?

Most of these policies advocate for an increase in federal funding. The CFS would like to see funds increased to provincial transfer payments, to Statistics Canada, to aboriginal students, to the Canada Student Grant Program, and to the Canada Graduate Scholarships Program.

As well, at their last semi-annual meeting in May 2008, the CFS distributed a ?federal election preparations? paper that noted a meeting with Elections Canada and pointed out several initiatives such as a ?media strategy.?

?Federation representatives offered to assist in the dissemination of promotional material from Elections Canada,? the paper read.

CASA, CFS, and CAUT boast a number of lobbying initiatives that aim for similar outcomes.

Both the CFS and the CAUT oppose the new Copyright Act amendment, bill C-61, introduced in June before the Parliamentary summer recess.

The bill makes several references to restrictions placed on material generated in educational environments, and both organizations feel this restriction would hinder students? development.

As well, both CASA and CAUT say they did not see either the current government or past governments provide a philosophical approach to education governance.

?we’re going to be looking for a long-term vision being put forward by the parties that addresses two fundamental things: an individual’s ability to reach their full potential in society, and a country that can deal with an impending labour crisis,? said Churchill.

?No one to this point has tackled this issue holistically, or provided any sort of long-term vision or strategy for post-secondary education.?

?We just don’t have any political parties at this point that are ready to take the federal government into a leadership role, dealing with some of the issues that we need to deal with,? he said.

Student and youth involvement in elections is another issue the three organizations are concerned with.

Elections Canada estimated that in the 2006 general election, 43.8 per cent of those aged 18 to 24 voted, as compared to the national average of 62.8 per cent.

As well, students made up the highest percentage of first-time voters, at 82 per cent.

?I think if our politicians can provide dialogue and platform discussions on issues about education and issues that really matter to students, I think you’ll see a more engaged student body,? said Churchill.

Robinson, however, pointed out the ambiguity over the need for an election in the first place.

?It’s going to be interesting to see how the Conservatives are going to justify the need for an election right now, given that this has probably been one of the most well-functioning minority governments in Canadian history.? 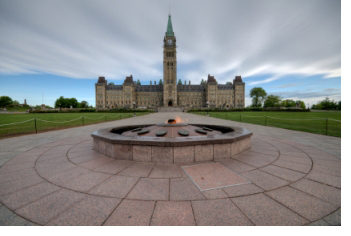 CFS and CASA Rally for Changes to Federal Transfers