Features
The Voice
Everything I Should Know Now, I Used To Know When I Was Two 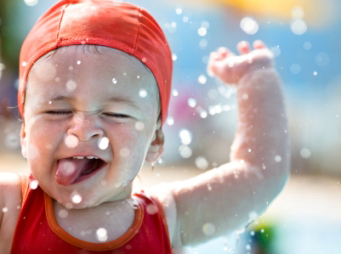 Instead of being perceptive of their high emotional needs, appreciative of their fresh and honest take on life, and tolerant of their creative and intellectual pursuits, we ignore them, label them, and send them away.

Toddlers get a bum rap in modern society. We’ve all heard the smears: ?Oh, the terrible twos.? ?Just wait ?til She’s three!? ?Toddlers are like little cavemen.? ?Lady, can you please restrain your two-year-old from eating the cardboard cookie display??

But personal hygiene aside, a two- or three-year-old can offer a fresh and unique outlook on living. If we examine the nature of toddlers, we can learn a lot about life and how we should approach it.

They recognize the value of simplicity

Who needs a closet full of clothes when one single outfit can be proudly worn day after day after day (and sometimes at night, too)?

What except gluttony causes adults to crave variations of chicken, beef, pork, fish, pasta, rice, and potatoes every night? A toddler is content with mac-and-cheese for breakfast, lunch, and supper.

If you thought young Hollywood started the trend of wearing a shirt and pretending It’s a dress, you’d be mistaken. My two-year-old daughter has worn the same oversized pink tank top as a minidress with knee-high pink socks every day for the past three weeks. I think It’s catching on, because later I saw the identical outfit in a trendy store window. How chic.

They think outside the box

Did you ever consider that marker caps make beautiful jewellery when stuck onto stubby fingers? Or that a bra can double as a hat? I’ll bet it never occurred to you that spaghetti sauce has a second use as 3-D furniture paint.

To a toddler, radical concepts like these come naturally. I’m surprised more of them aren’t CEOs.

They deal with their emotions in a healthy way

While It’s true that the middle of the toy aisle in Wal-Mart may not be the ideal venue for psychological release, the method undeniably works. After the storm clears and You’re asked to leave the store, the kid is friendly and happy and can’t even recall what upset him in the first place.

Contrast this with adults, who bottle up frustration and rage until they get complexes or become serial killers.

I happen to know something about this?about venting like a toddler, that is. One day, I was furious about something or other, and my husband suggested taking a cue from our daughter and having an all-out tantrum on the floor. Since the neighbours weren’t home, I did. I lay on my back, kicked my legs in the air, and raged until I was out of breath.

It worked?I ended up laughing and not mad at all. And as I no longer remember what caused my anger, it seems that the tantrum chased it away. Either that, or embarrassment is causing selective memory.

While an adult might think a guy with an eye patch looks like Jack Sparrow’s first mate, they won’t say it out loud. In contrast, a two-year-old will cheerfully point and say ?Look, Mommy, a pirate!?

It makes for an awkward situation when You’re stuck in line with the pirate, but at least you know where you stand with a toddler. You never have to worry she’ll be nice to your face and then make comments behind your back.

They appreciate the importance of exercise

I’ve never met a preschooler who doesn’t love to run . . . from her parents. Irksome to the parents, maybe, but that just shows the little girl’s concern for their health and fitness too. And the commitment to calisthenics! If I, too, pulled out, and tried on, every item of clothing from my closet every day, I’d burn many more calories than I do by sitting at the computer.

Broad-minded toddlers aren’t limited to paper media. The whole world literally is their canvas, especially if the part of the world they’re drawing on belongs to the landlord. And they express themselves in such a wide variety of ways: indelible magic marker, indelible pen, indelible highlighter, or furniture-scoring tool.

And It’s not just the use of fists or dump trucks to get their points across. Toddlers also heavily support mediation. Cries of ?Mommy, he won’t shaaaaaaaare,? and ?AAAAAAAAAAAAAAAGH? are toddlerese for ?We’d like to submit this dispute to a mediator, please.? And afterwards, everyone is the best of friends.

Toddlers may be at times loud, messy, dirty, or rude, but they’re also the cleverest philosophers you’ll ever meet. The next time you see a three-year-old having a screaming meltdown in front of a candy display, feel free to join him and rage about your boss, that assignment you can’t quite get, and the fact that you want to be able to eat the whole candy display in front of you without getting fat.

Everything I Should Know Now, I Used To Know When I Was Two