Columns
The Voice
The Mindful Bard – Roddy Doyle, The Deportees

A young Nigerian man is invited to dinner at the boisterous Dublin home of a female acquaintance.

Her brother makes a snide comment about the dearth of culinary options in Nigeria and is immediately descended upon by the women of the house, mad as banshees, one of whom raps him on the head with her spoon.

When the ruckus dies down the Nigerian reprimands the daughter for her disrespect to her parents and then scolds the man of the house for uttering profanities. One of many delightful little tales, chronicling one of many spectacular culture clashes.

Doyle uses culture clashes in The Deportees to explore the question ?what are you and what is it that makes you that??

The book is a group of short stories about immigrants?to Ireland, mostly , but one story, ?Home to Harlem,? is about an African-Irishman looking for his roots in New York city. 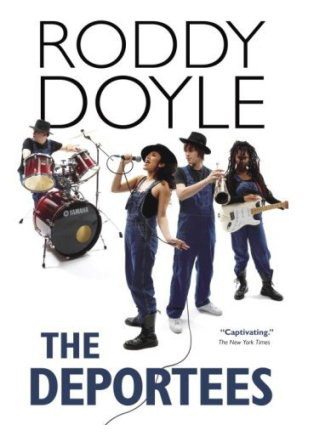 Not so in Ireland, where a defence of Irishness is often, as elsewhere, a cloaking device for racism.

?57% Irish? points out the absurdity of measuring something as intangible as nationality, especially as a means of banning undesirables from entry.

In the end, the thing that trumps racism is biology?the attraction between the Irish and the foreigners is tangible and hard-boiled. Nature will ultimately have her way, or the world history of ethnic interminglings and the treasures they’ve produced could never have taken place.

A central theme of Doyle’s work is the commonality between blacks and the Irish. Politically, musically, historically, personally: you name it, he’s connected the dots. On the other side of that coin is the implicit notion that blacks and Irish belong together, and this Doyle accomplishes in the title story.

Jimmy Rabbitte (That’s right, the erstwhile band manager from The Commitments) herds in a motley crew of internationals and deliberately forms a band to perform?get this?Woody Guthrie songs, which they do splendidly before launching off into whatever else they feel like doing.

Typical of Doyle’s fiction, music is a character all its own. The way folks in these stories dismiss undesirable music with the solemn pronouncement ?shite? seems a bit arrogant and yet they’re so spot-on they’re easy to forgive (e.g., the Titanic soundtrack??shite?; James Brown??grand?).

Doyle is, as always, such good fun. The depth of his writing is carefully concealed behind simple prose, hilarious characters, and crash-and-burn plot lines. Stick with him and he’ll show you the grace and dignity of individuals who’ve had theirs all but blotted out.

The Deportees manifests nine of The Mindful Bard’s criteria for books well worth reading: 1) it is authentic, original, and delightful; 2) it confronts, rebukes, and mocks existing injustices; 3) it renews my enthusiasm for positive social action; 4) it gives me tools enabling me to respond with compassion and efficacy to the suffering around me; 5) it displays an engagement with and compassionate response to suffering; 6) it inspires an awareness of the sanctity of creation; 7) it is about attainment of the true self; 8) it provides respite from a sick and cruel world, a respite enabling me to renew myself for a return to mindful endeavour; and 9) it stimulates my mind.