Features
The Voice
This World – Across the Continent in 22 Days, Part II

This is the second instalment in a series chronicling the adventures of the author; her husband, Adam; and two-year-old daughter, Kiersten, as they travelled by car from Alaska to Louisiana in summer 2008.

Dawson City is our first sightseeing stopover on this trip and It’s well worth it. It’s a fascinating place, especially for history buffs. Using old photographs, historians have restored many of the buildings to their turn-of-the-century appearance, both inside and out. A majority of the local businesses and hotels have kept the frontier-town theme; by law, all new construction must use that look?and the result is a fairly authentic-looking gold rush town. Seeing modern automobiles driving up and down the street gives me a start, as they seem bizarrely out of place.

Not all of Dawson’s historic buildings have been restored; in fact, a few have been stabilized and maintained in a half-collapsed state to show what happened when settlers built a heated building directly on top of permafrost. As the ground thawed unevenly, floors sank to different depths and houses collapsed in on themselves. The people who flocked north for the riches had a few things to learn about Yukon winters!

The highlight of our stay is a tour led by a costumed Parks Canada employee, who explains the historical and cultural significance of Dawson City. It’s amazing that a town so remote?many years before highways linked it with Whitehorse and Alaska?could become known as the ?Paris of the North.?

Despite any cultural brilliance, we learn, Dawson City was foremost a northern town, with frigid winters that took their toll on prospectors unused to the cold. The local undertaker, who wanted all necessary graves dug before the ground froze, would walk around town in the fall, trying to determine whodunnits’d make it and who would pass away before spring. Practical, yes?but gruesome.

We also drive out to the claim on Bonanza Creek, where the gold rush started. I’m glad it hasn’t been commercialized like so many historical sites. There’s a simple sign near the trail leading to the creek, which probably looks just like it did when George Carmack, Dawson Charlie, and ?Skookum Jim? Mason discovered gold and made history. Tourists can rent gold panning equipment nearby and try panning in the creek. We see several retired couples out working the ?claim,? but they aren’t having any luck. Any real gold was tapped out long ago! 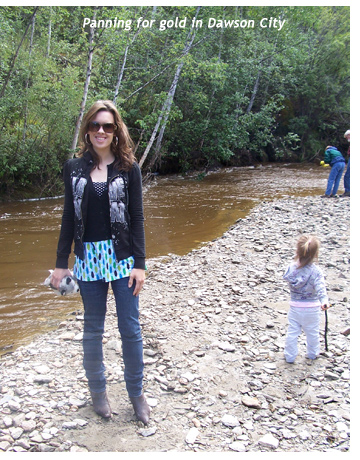 Before leaving Dawson City, we visit the Northwest Territories visitor’s centre. Although the NWT is hundreds of miles away, Dawson City is a short drive from the Dempster Highway, which heads north to Inuvik, NWT. We look at fascinating pictures and for a few moments of insanity, we consider postponing our plans, abandoning our reservations, and attempting to drive the Dempster. However, after reading accounts of the rough road (?lost all four tires and a windshield but we made it?), we rule it out?for this trip, at least. Someday, we’ll be back. And we’ll bring several tires!

We leave Dawson City in the late afternoon and travel a few hours to a primitive lodge in a small Yukon community. Tomorrow we have a long drive; getting a head start today should shorten that drive a bit. we’ll be traveling south at first, but at Whitehorse we’ll turn west, back toward Alaska. The reason for this detour: Kluane National Park.

Kluane is one of Canada’s undiscovered jewels. When we drove through the area in 2006, we were awed by the brilliant, almost turquoise blue of Kluane Lake and the jagged, snow-capped mountains beyond. We swore that someday we’d come back to explore the park. Our original route took us within a couple hours of the park, close enough to call for a detour.

As we drive south, we’re on the constant lookout for wildlife along the highway. Although we’ve heard several reports of bear and moose sightings, we see nothing except a few chipmunks and what might be a fox or a coyote. Kiersten’s cranky and seems tired of being in the car. We don’t blame her. Fresh air and hiking in the mountains should do us all some good.

Late in the afternoon, we arrive at the main Kluane Visitor’s Centre in Haines Junction. they’re showing a film on bear country safety, and after viewing it, we have a dilemma. we’re still desperate to see a bear, but we’re a little nervous about coming across one while hiking. In fact, we’re scared stiff. We’ve learned all the safety tactics, but don’t have the industrial-strength bear spray and 12-gauge shotgun they recommend as a last resort. And how do you explain to a toddler that Mr. Grizzly isn’t a nice, cuddly bear like Winnie the Pooh?

For all our interest in hiking and camping, I think we’re city people at the core. Our ideal bear sighting would be from a car, with foot poised on the accelerator, ready to make the jump from zero to 60.

As we head north toward Kluane Lake and Destruction Bay, the landscape becomes familiar. I was a little worried that after two years of Alaskan scenery, Kluane wouldn’t seem as impressive. Fortunately, That’s not the case; it is still, in my mind, the most beautiful place on Earth. Sheep Mountain Ridge, which we’re hoping to hike the next day, is obscured by clouds today, but we’re hoping for clear weather tomorrow. 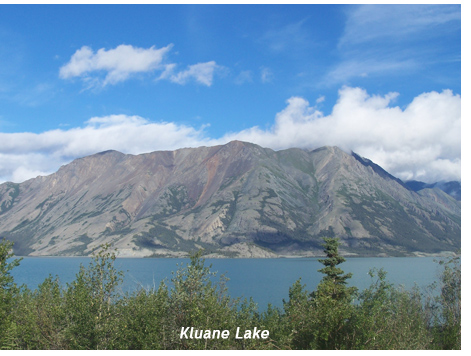 That night, we have a bit of a medical scare when Kiersten develops a wheezy cough. She’s had on-and-off coughing problems since a bout with bronchitis in May, but nothing since we left Alaska. we’re a little alarmed because here, on the shores of Kluane Lake, we’re miles from any sort of medical centre. If her coughing keeps up, we may have to cancel our hiking plans for the following morning?and That’s a best-case scenario.

The morning dawns, and It’s perfect. The sun is out, not a cloud in the sky, and the temperature isn’t too hot or too cold. Best of all, Kiersten’s completely fine?not a trace of a cough. we’re grateful there was no medical emergency out here, and that we didn’t have to abandon our Kluane hike, especially after coming so close.

The ranger at the local visitor’s centre recommends the Sheep Creek trail, which is a four to six hour hike. we’re not sure we can do the whole thing, since we want our drive back to Whitehorse to coincide with Kiersten’s naptime, but we’ll go as far as we can. Our worst habit in hiking up a mountain is that we can’t bear to stop and turn around in case we miss something even better up ahead. The last time we went ?just a little further,? we ended up spending over seven hours hiking along a mountain ridge in Alaska. We promise ourselves that this time, we will turn around at 12:30 p.m., and no excuses.

As we set off along the trail, the first thing we see is a plaque erected as a memorial to a woman?only a few years older than us?who was killed by a bear right on this same trail. It’s sobering, and for a moment we reconsider our hike . . . but we keep going. Our wildlife worries seem for naught, though; we don’t see any animals except a chipmunk in the parking lot.

Going up the mountain, we get some gorgeous views and photographs. The area is truly breathtaking, and we wish that more people would take the opportunity to see it. Most travellers passing between Whitehorse and Alaska probably drive by without realizing there’s a whole park to explore. To our chagrin, though, we get exhausted very fast. The trail is steep, but we’ve hiked steep trails before. Entertaining Kiersten?who’s riding in a carrier on Adam’s back?probably isn’t helping. Reciting songs, poems, and stories while climbing a steep incline tends to accelerate breathlessness. And the sun has warmed up the trail?we’re sweating in our sweatshirts and jeans.

When we arrive at our halfway time, we realize we’re still far from the top. We consider breaking our vow and going on further, but Kiersten wants to get out and walk for a while, so we realize that idea is doomed.

The trip back is much easier?mostly downhill! we’re sorry we didn’t make it to the top, but even the shorter hike was worth it. Maybe someday we’ll be back for more. 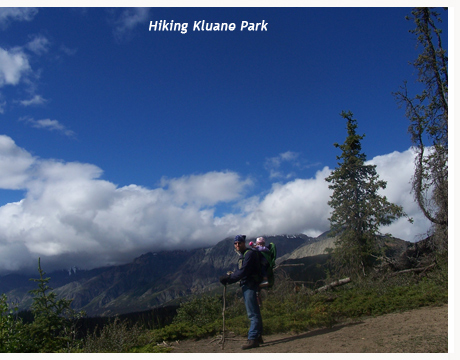 That evening, we arrive in Whitehorse. It seems bigger than we remember. It’s the largest city in the Yukon, with a population of 20,000, and seems like any bustling town, with stores and restaurants we recognize. We realize we’re not used to civilization: even our lodging?an ordinary hotel?feels incredibly modern with something as basic as an elevator!

We stay in that night, as we’re tired from all the outdoor activity. I take the opportunity to do laundry, and while I’m waiting for it to finish, I decide to attempt colouring and highlighting my hair. It’s a disaster. Apparently, ?darkest mahogany brown? translates as ?bright burgundy,? while ?chocolate cherry mousse? highlights are really just orange. I look like Halloween’s coming. Worst still, I won’t be able to fix it for a few days, and my flaming head is going to distort any pictures. First thing tomorrow, I’ll have to dig through the car for the ultimate quick fix?a hat!

This World – Across the Continent in 22 Days, Part III