Features
The Voice
This World – Across the Continent in 22 Days, Part III

This is the third instalment in a series chronicling the adventures of the author; her husband, Adam; and two-year-old daughter, Kiersten, as they travelled by car from Alaska to Louisiana in summer 2008.

Since today’s drive is much shorter than normal?less than five hours?we’re not in a hurry to leave early. This gives us the chance to take in a local museum recommended by several guidebooks: the Yukon-Beringia Interpretive Centre, which showcases Ice Age-era Alaska and the Yukon.

There we learn, to our surprise, that the Alaska-Yukon area was largely free of the ice sheets that covered much of North America during the Ice Age. The climate at the time was so dry that ice was unable to form. It was here that woolly mammoths and other giant beasts roamed the steppe-like grasslands, and it was here, archaeologists believe, that human beings crossed the Bering Strait, thought to then be dry because so much of the earth’s water was tied up in ice.

The museum is fantastic, with many interpretive displays and activities for children. Unfortunately, Kiersten is too young to appreciate them, although she does like the full-size woolly mammoth skeleton that dominates the main hall. We can’t spend as long as we’d like, though, since we need to get on the road and Kiersten desperately needs a nap.

This afternoon’s drive seems to take longer than it should. we’re all fairly tired, my hair is still orange, and there’s no wildlife anywhere. we’re also so desperately sick of those kiddie CDs that after hearing ?Mickey Mouse Club? for the 17th time in a row, Adam barely stops himself from flinging the CD in front of the car and driving over it with a resounding crunch.

Fortunately, we arrive in Watson Lake without any musical mishaps. It’s a very small town, largely known for its signpost forest: a sprawling collection of hometown signs from locations worldwide. We’d like to place our own sign, but at this point we aren’t quite sure where our hometown even is. Alaska? Louisiana? we’re essentially hoboes right now, no home of record!

Finally, this morning, the animals come out of their hiding places. We see a buffalo, then another, and a few miles later, a whole herd! We also see bighorn sheep, a moose, and what we think is a deer. No bears, but right now, we’re not complaining. we’re thrilled to know wildlife still exists on the Alaska Highway.

I’m less thrilled that afternoon when I have a wildlife encounter That’s much too close for comfort. While at a rest stop, I glance at my purse hanging on the door. There, on the strap I was holding not five seconds earlier, is an enormous winged beetle that looks like it belongs in Jurassic Park. I scream for help and cower against the wall, hyperventilating, while a lodge clerk calmly removes the giant insect. I’m amazed by her nonchalance. My experience with huge bugs generally involves half a bottle of industrial-strength bug spray and a stack of encyclopaedias to make sure they’re really, really dead.

Give me a ferocious grizzly any day. 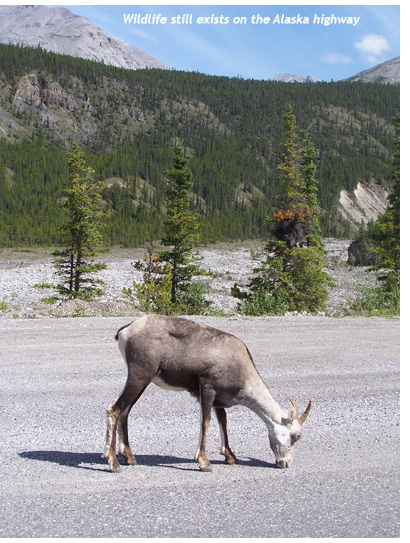 Much of today’s drive is spent passing in and out of British Columbia and the Yukon. The highway weaves back and forth over the border, so we’re often not quite sure where we are. The terrain is very mountainous here. The Rockies truly are wild, rocky, and beautiful, but the driving conditions?dangerous curves and steep drop-offs with no shoulder?mean I can’t enjoy the scenery as much as I’d like. I do keep a close lookout for wildlife, as sheep and goats tend to congregate on the side of the highway. Kiersten is thrilled when we spot a group of three goats?big, medium, and small?which we tell her are her beloved Three Billy Goats Gruff.

Maybe seeing her fairy-tale heroes has overexcited her, but for whatever reason, this afternoon Kiersten decides she doesn’t want to nap. That complicates things, as Adam, exhausted, is having a nap himself, and I can’t entertain her on this stretch of the highway.

Then something amazing happens. She suddenly snaps out of her crankiness and begins playing happily and independently. She’s well-behaved all the way to our destination, Fort Nelson, British Columbia.

Tonight, our hotel comes with a microwave, and for the first time since we left Alaska we have a hot, ?homemade? meal. It’s wonderful, and no one is happier than Kiersten.

She spends the evening playing just like she did before we began travelling. Could she finally be getting used to life on the road? Tomorrow, our last day on the Alaska Highway, is a short drive, and we hope for a repeat.

Travelling with an often-unhappy toddler has made for many miserable hours in the car, but a more pleasant driving experience seems attainable now.

And we make it happen. Today is a good day. Kiersten seems to have hit a turning point. She’s amiable, polite, and plays independently as well as with us. After seven sometimes very, very long days, she finally seems to have adjusted to the life of a world traveller.

The drive is pleasant, too?and short, only about four and a half hours. We leave the earliest yet, around 9:30 in the morning, and that means we arrive in Dawson Creek mid-afternoon. In fact, we’re early enough that for the first time since we left Alaska, Kiersten can take her afternoon nap in a real bed instead of a car seat. We eat a hot dinner at a normal hour, and in general spend a relaxed evening.

Dawson Creek?which I keep calling Dawson City by mistake?seems larger than I remember it. The town’s claim to fame is its location at Mile 0 of the Alaska Highway, which stretches 1,522 miles northwest to Delta Junction, Alaska. I can remember the feeling of adventure two years ago when we arrived at Mile 0 on our way up to Alaska.

Now, the feeling is bittersweet; It’s like a chapter of our lives has closed. But we’re sure there will be more adventures ahead. Tomorrow, we’re headed for the first major city since Anchorage: Edmonton, Alberta!

We head out very early this morning. Eight in the morning is definitely a record for us, but It’s especially important for today, as we’re going to lose an hour at the Alberta border. Actually, we become confused when we read in the Milepost that Dawson Creek doesn’t follow daylight savings time (its far-north location gives enough daylight hours), and we spend a while trying to figure out exactly what time it is. After some time we realize that our hotel must have used daylight savings time so as not to confuse travellers. Unfortunately, it had the opposite effect on us! 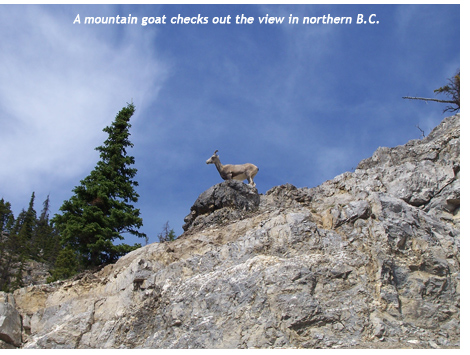 The terrain grows much flatter as we head east through Alberta. It’s raining steadily, but despite this being one of our longer drives, we’re making excellent time thanks to our early start. Kiersten refuses to nap, but aside from that She’s doing well again today.

All day we’ve been promising Kiersten a trip to the hotel pool, and after dinner we finally make good on it. Although the pool room is a little chilly for our tastes?seriously, 22 degrees Celsius??it doesn’t affect her enjoyment, and she has a blast. After being strapped into a car for so long, She’s relishing the freedom.

After Kiersten’s in bed, I meet up with an old friend who lives outside the city. We haven’t seen each other in 10 years. Back then, we were both newly in college, but now we’re married with kids and we have a lot to catch up on. In fact, we talk so long that before we realize it, It’s two in the morning! By the time we say goodbye and go off on five different tangents (necessitating more goodbyes), It’s past three.

It’s a wonderful visit. But am I ever going to be tired tomorrow!

Today is the day I have been waiting for and saving up for ever since we found out we were moving south. It is the day that I will shop ?til I literally drop, at the West Edmonton Mall?the largest mall in North America.

The WEM, as It’s called, is enormous: it boasts an amusement park with a roller coaster, a water park, sea life displays, and other attractions. I’m more interested in the 800-some stores. Adam and Kiersten are going to have a Daddy-daughter outing while I get some shopping done.

However, after several hours I begin to think that all the wilderness travel has dampened my former shopaholic tendencies. To my surprise, I’m not really enjoying myself as much as I expected. In fact, I’m secretly a little bored.
Adam and Kiersten have a so-so trip to the sea life shows, but after a while Kiersten becomes cranky and doesn’t enjoy it much. Now that She’s used to car travel, maybe being out and about is too unfamiliar for her.

It’s an unsatisfactory day all around. But tomorrow we have a short drive to Calgary, and we’re hoping to arrive early enough to have a little fun sightseeing. We want to erase the disappointing results of our lovingly planned mall excursion!