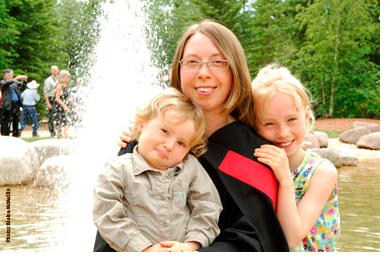 To quote cartoonist Charles Schultz, ?All you need is love. But a little chocolate now and then doesn’t hurt.?

Heather, who graduated with a BPA in government law and management this past spring, credits chocolate as a motivating factor: ?As long as I had two chunks of dark chocolate and a cup of tea,? she was ready to go, she says. ?It sweetened the deal.?

Heather, who spent 16 years working on her degree, became interested in higher education after working for a year as an administrative assistant. She knew she wanted to do more than paperwork for the rest of her career, and she definitely wanted to do something that did not involve numbers.

?I didn’t like numbers,? Heather says. ?I’d worry about numbers, and dream about [them].?

Her boss suggested studying public policy, and Heather was intrigued. Although her long-term goals weren’t clear at the time (?anything not to be crunching numbers!? she says) she preferred working in a field that incorporated issues relevant to the whole community. Public policy seemed to fit the bill; it encompassed many important issues, all of which had a human element.

?Numbers don’t have a face, [but] water and environmental issues do,? Heather says. For example, in her current position of water resources program advisor for the Yukon government, she tries to balance the competing needs of resource extractors and environmental preservation.

Heather discovered AU’s BPA program, which could build on her two-year business administration degree from Yukon College. She was familiar with AU already, as she’d done some of her diploma courses through AU to avoid daytime class schedules.

After beginning the BPA program, Heather applied for a temporary work assignment in policy, and enjoyed it so much that she continued working in the position after her trial year ended. The more relevant her studies became to her work, the more she became interested in her studies.

For example, her coursework described new concerns in water valuation, which applied directly to what she did every day. Heather learned to structure her courses based on her current work projects, and attempted to relate her studies to her policy work.

?I made it fit with my job,? she says. The advantage: self-motivation, a stumbling block for many distance students, was easier for her.

For Heather, a bigger challenge was finding the time to study, particularly in her final year, when she juggled a heavier course load with work and family. Planning and scheduling were vital to her success as a student. ?It has to be done,? Heather says. Carving out blocks of time into her schedule helped her stay on track, particularly after her children were born.

But making a plan doesn’t mean flexibility should go by the wayside. ?If it doesn’t work out, [move it] to another time,? she says.

Distance study was the perfect solution for many reasons. Heather lives in the Yukon Territory, where there are no universities. The ability to study by correspondence meant she didn’t need to move south, which wasn’t financially possible for her.

Heather particularly appreciated the flexible schedule distance study provided. ?I could do it anytime,? she explains. That meant she didn’t have to give up her job, and even after having children several years into her studies, she still could squeeze in study hours during her their nap time.

Flexibility also meant Heather could spend as much time as she wanted working on her degree, although she thinks 16 years is a little too long!

?I would have liked to have done it in a shorter time,? Heather says. ?Sixteen years is very draining . . . It’s always in the back of your mind.?

Now, the need to study no longer overshadows this happy graduate, and She’s enjoying her freedom. ?I really pushed in the end,? she says. As her children grew older, studying with family obligations became more of a challenge. This became an incentive to fast-track her degree. She finished nine courses in her final year, graduating in June.

To students who might think the road ahead seems long, Heather advises: ?don’t give up! . . . The sense of accomplishment and pride is really worth it.?

For Heather, the benefits of higher education are greater than a piece of paper; they’ve made her work more relevant. ?All the courses I’ve taken didn’t just get me a different job,? she says. ?The knowledge I’ve gained helped me grow in [my] position and made me feel that I was . . . able to contribute to it.?