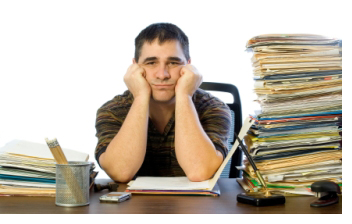 But figuring out what exactly has happened and how it affects students at Canadian universities is, like the problem itself, multi-faceted and complex.

Any student can relate to financial crunch times, especially at the end of each semester, when December rolls around: the money starts to dry up and the unpaid bills start to collect.

In these times of financial hardship, students tend to seek an injection of liquidity?which is essentially the capability to readily convert assets into cash?in the form of loans from their parents or banks, while some resort to the dreaded part-time job.

Picture this same financial crunch on a global economic scale but with no parents, banks, or part-time jobs to provide the required infusion of cash.

This lack of liquidity is at the heart of the American financial crisis, as banks have become almost completely reluctant to provide loans to other banks, let alone businesses and consumers.

?Someone has to pick up the hot potato, and without the private sector taking on debt, the government has to,? said Mario Saccareccia, a University of Ottawa economics professor.

?Even former free-market fundamentalists accept the need for greater government intervention and deficit spending in order to retain jobs and stave off potential large-scale unemployment.?

To evaluate how the credit crisis will impact students, it is imperative to understand how it impacts the Canadian economy, and how the crisis came to a head.

The lack of available bank credit is the central problem behind the financial crisis. Banks and companies have stopped lending to one another, or will only do so at extremely high rates, thus slowing financial transactions.

Saccareccia says despite that the origins of the crisis lie outside the Canadian system, we should still expect to suffer from its consequences.

?While the practice of sub-prime mortgage lending, which is at the heart of the crisis, was almost entirely centred in the United States, the deep integration of the American and Canadian financial sectors leaves us quite vulnerable to the fallout from the crisis,? he said.

Saccareccia says the credit crisis arose because sub-prime mortgages?which no one knows the actual value of?were packaged into securities and sold to other financial institutions around the world as safe assets. 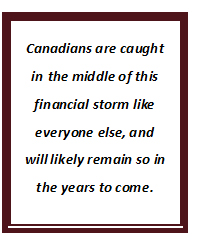 ?These securities are essentially anonymous and banks simply do not know or trust that other banks are clean of the potentially toxic assets and thus are very apprehensive about risking lending them money,? Saccareccia said. ?Thus, it has become imperative that the government intervene in the markets to ensure that capital flows continue.?

Saccareccia claims Canadian banks, which are well leveraged, will not experience the same level of crisis as the banks in the US, but the potential for some volatility still exists.

Like all Canadians, students can expect to find it more difficult to get loans from banks, or find employment, both now and possibly even after graduation.

And despite the best efforts of the Canadian Federation of Students? Drop Fees campaign, students are highly unlikely to receive much reprieve from high tuition.

The prospect of a recession means that government revenues from taxation will likely fall while expenditures?due to higher unemployment and welfare service costs?will likely rise.

Saccareccia remains sceptical about the capabilities of Canadian political leadership in this crisis: all parties refuse to accept that deficit spending may be necessary. A Canadian deficit is more likely to result from US demand slowing down after the credit crunch, rather than as a direct result of the credit crunch.

Errol Mendes, a U of O law professor, suggests the US might be so overloaded by these toxic assets that any government bailout package could come up short.

?The amount of bad debt currently in the financial system could be into the tens of trillions of dollars and the existing bailout packages are likely insufficient,? he said.

?The much heralded recent $700-billion US bailout package will do little to stem the tide of [personal mortgage] foreclosures in the United States, and thus the financial crisis itself, as it doesn’t actually do anything for homeowners.?

Ultimately, both Saccareccia and Mendes agree the global economic crisis is the worst since the Great Depression and that recovery may be a long and difficult affair.

Americans reflect this assumption. A CNN opinion poll released on October 6 states six in 10 Americans believe an economic depression is likely. Consumer confidence south of the border is low, which does not bode well for a global economy still somewhat dependent on US consumer spending.

Canadians are caught in the middle of this financial storm like everyone else, and will likely remain so in the years to come.

Mendes contends that if this crisis is not managed correctly, the global economy is ?potentially on the precipice of a major collapse.?

The Canadian economy, he explains, ?has thus far been relatively insulated by high commodity prices; however, with a global economic recession appearing imminent, commodity prices have declined substantially over the past few weeks, as evidenced by the massive drops in the Toronto Stock Exchange.?

In the coming months, the crisis will, at the very least, affect certain regions of the Canadian economy.

Saccareccia believes the Canadian economy is already in recession due to significant drops in exports to the US, which account for approximately one-third of Canada’s Gross Domestic Product. 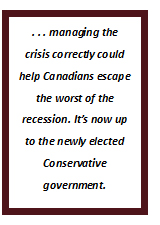 Mendes suggests we are currently ?six months to one year away from recording a budget deficit.? This is particularly true for Ontario where ?exports to the United States have dropped substantially and recent layoffs in the manufacturing sector reflect the difficulty ahead.?

Saccareccia says the failure of government to intervene decisively in the economy following the 1929 collapse, when they chose instead to limit spending, exacerbated the crisis as capital flows dried up. This brings up the need for government intervention in the market.

Economists today have a far greater understanding of the economic and financial systems than they did in 1929, even though many regulators did not foresee just how dangerous credit default swaps could become.

But any increased government intervention in the Western financial markets to ensure continued capital flows will be expensive.

As far as this country is concerned, both Saccareccia and Mendes agree that managing the crisis correctly could help Canadians escape the worst of the recession. It’s now up to the newly elected Conservative government.