Columns
The Voice
The Mindful Bard – The Elegance of the Hedgehog

Book: Muriel Barbery, The Elegance of the Hedgehog

?Now it happened that one day the three princes went out hunting in a large forest at some distance from their father’s palace, and the youngest prince lost his way, so his brothers had to return home without him.?

?The Magician’s Horse,? from The Grey Fairy Book, edited by Andrew Lang

Do you know the story? By means of witchcraft, accident, miscommunication, or trickery someone loses his or her royal status. The protagonist is still royal, mind you, It’s just that no one else sees it, and the story revolves around the means of eventual return to royal estate.

Cordelia in King Lear is one example. So is The Frog Prince. And so is The Elegance of the Hedgehog, in which a stifling and sophistic class system is held entirely responsible for the blindness of the world at large to the true nature of two amazing human beings.

One, Renée Michel, is a fallen royal. Born into abject poverty, her birthright dictates her royal status must not be acknowledged. She grows up in a world of struggle, meanness, and sullen silences, a world wherein the poor die waiting for the rich to treat them with respect and dignity.

In spite of her stark upbringing Renée has become, by her own description, a proletarian autodidact. With no formal schooling she grasps the psychological observations of Tolstoy, the phenomenology of Husserl, the formal elegance of Satie. 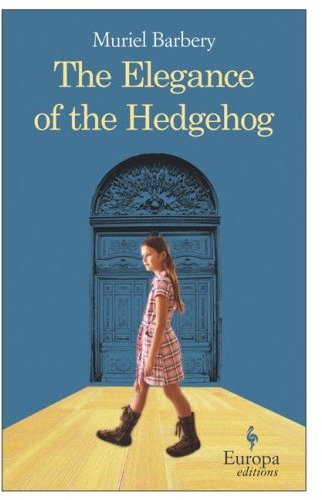 The middle-aged concierge of a posh building in Paris, Renée is obliged, she feels, to pose as a typical concierge, that is, to be cranky, dishevelled, and lowbrow. She leaves her television on but never watches it, sneaking into a back room to watch fine films on DVD. She also hides her books and music, and is careful never to correct the bad grammar, political pretensions, or cultural flubs of the snooty people in her building.

To a large extent she is simply submitting to the general farce that is social inequality, but there is a deeper justification for her stealth. Just you try to imagine what that might be.

In one of the luxurious apartments upstairs lives a young girl named Paloma who has decided to kill herself. Paloma is also a clandestine intellectual, and, also like Renée, has only contempt for the emptiness and pretensions of the lives around her. Her thirteenth birthday will be the festive occasion of a grand fire she plans to create to burn down her home, her family, and herself.

You may be appalled at Paloma’s callousness, her suicidal ideation born of a pampered, pain-free life. But Paloma’s suicide plan is in one sense an existential experiment, a challenge to life to step up to the bat and show itself meaningful.

Hang in there and you’ll hear Paloma redeem her heartlessness with this penetrating observation: ?I think I wanted to die and make Colombe and Maman and Papa suffer because I hadn’t ever really suffered. Or rather, I was suffering but it didn’t hurt . . .?

Into the picture comes the new tenant Kakuro, who is, thankfully, both Japanese and a true aesthete. Kakuro inadvertently discovers the secret natures of the two narrators, shamelessly befriending them and bringing them together.

One thing that makes this book such a gratifying read for artists is that It’s written from the point of view of art lovers who are not artists themselves; it thus grants us an objective affirmation of the value of what we do. Barbery touches on the same idea Reginald Shepherd expounded in Orpheus in the Bronx: art, far from being a means of asserting elitism, is a way out of ugliness, squalor, stupidity, and inequality.

This book is relevant reading for culture makers because it assures artists of their essential value in a market economy that would have them marginalized, and also shows up the absurdity and injustice of social hierarchy.

Isn’t the novel always in some way about class? This book is openly about class from the beginning, but it ushers in a postmodern denunciation of class just as its characters denounce postmodernism. In one calm affirmation??We can be friends. We can be anything we want to be??Kakuro makes class prejudices fall away like dead leaves and appoints love of beauty and friendship the star criteria of fellowship.

The Elegance of the Hedgehog manifests 11 of The Mindful Bard’s criteria for books well worth reading: 1) it is authentic, original, and delightful; 2) it confronts, rebukes, and mocks existing injustices; 3) it gives me tools enabling me to respond with compassion and efficacy to the suffering around me; 4) it makes me want to be a better artist; 5) it gives me tools which help me be a better artist; 6) it displays an engagement with and compassionate response to suffering; 7) it inspires an awareness of the sanctity of creation; 8) it is about attainment of the true self; 9) it provides respite from a sick and cruel world, a respite enabling me to renew myself for a return to mindful artistic endeavour; 10) it stimulates my mind; and 11) it poses and admirably responds to questions which have a direct bearing on my view of existence.