Features
The Voice
This World – Across the Continent in 22 Days, Part IV

This is the fourth instalment in a series chronicling the adventures of the author; her husband, Adam; and two-year-old daughter, Kiersten, as they travelled by car from Alaska to Louisiana in summer 2008.

Since today’s drive is only three hours, we set out hoping to arrive in Calgary early enough to do some sightseeing.

Unfortunately, we hadn’t counted on the dozens of little delays that seem to be the norm for us.

A grocery stop turns into an hour-and-a-half-long marathon as I try to anticipate our food needs. Then, on the way out of Edmonton, we miss our turnoff twice and end up on country roads, neither of which goes to Calgary.

Once we finally find the right road, It’s noon. We start driving, but after half a mile, we find an outlet mall with a huge children’s clothing store. Still smarting from yesterday’s disappointing shopping trip, I can’t pass by without a quick peek.

An hour (and $60) later, we’re finally on our way. By now, It’s after one and I’m exhausted; my late night in Edmonton is catching up with me, and I can’t keep my eyes open anymore. I drift in and out of sleep as we head south.

It’s quite flat out here, so we see Calgary miles before arriving in the city limits. As traffic starts picking up, we realize that we forgot to get directions to our hotel, which is somewhere downtown. We’ve gotten so used to towns with only one or two main streets that we forgot Calgary is the third-largest city in Canada!

By the time we finish arguing about who was supposed to get directions, we’re on the other side of the city. And by the time we find our hotel, check in, and eat dinner, It’s Kiersten’s bedtime. To our regret, we won’t be doing any sightseeing here.

I spend the rest of the evening doing laundry. The next few days, we’ll be camping?the first time since my childhood, and the first time ever for Adam and Kiersten?and we’re a little apprehensive. At least we’ll be prepared in the clean-clothes department!

Our priority this morning is getting supplies for the next few days, since we’re not sure what grocery facilities are available outside Glacier National Park. Since It’s our first time camping, I’m planning very basic meals. we’ll be camping again a few days later in Yellowstone National Park, so we’re treating Glacier as a test run. A little experience will be helpful when we’re more remote.

Driving through southern Alberta, we pass through a few small towns and a lot of open farmland. After a while, we turn east for another detour. we’re going an hour or two out of our way to visit the small community of Coleman, Alberta. Nearly 80 years ago, my maternal grandfather and his family made the trip across Canada from Coleman to southern Ontario.

It’s been more than three quarters of a century since his family was back in those parts, so it seems a unique chance to connect with history.

We take a few pictures of the area, and we know my grandfather will be thrilled to see his hometown again.

Mid-afternoon, we head back toward the US?Canadian border. The drive seems to be taking eons; we just want to get to our campsite!

Finally, we do, and It’s gorgeous. 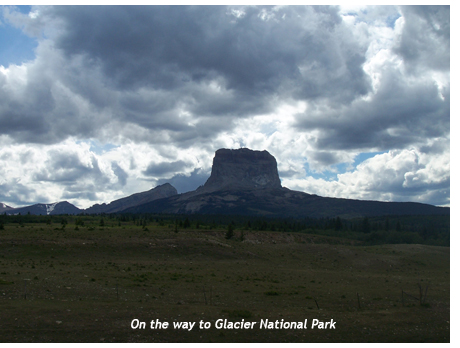 It’s beautiful here, and the mountain formations are rocky and rugged, but more flat-topped than what we’ve seen further north. I’m awed, and that surprises me. On this trip, I’ve seen so many spectacular views that I didn’t think mountains could still impress me! we’re excited to camp amid such beautiful scenery.

Despite our inexperience, we set up our tent without difficulty. However, by now It’s past seven, and we’re ravenously hungry. We don’t have any firewood, the Park doesn’t sell it, and It’s illegal to use wood from the Park, so we’d have to drive back into town to get it. We also recall that we’ve never started a fire before. Cereal for dinner sounds delicious, and it is.

Camp chores and cleanup seem to take longer than I expected. Since this is bear country, there are a lot of rules about storing food and utensils to keep a very clean camp. Essentially, everything?even drinking water?must be kept inside if not in immediate use. It takes a lot of effort, but we’re not keen to attract bears our first night under the canvas.

Kiersten is excited at the concept of sleeping in her ?cocoon? tonight, and falls asleep fairly quickly. In the meantime, Adam has gone out to purchase firewood, and we take advantage of the last light of the day to attempt to build a fire. Our inexperience shows when we unsuccessfully try to light a log with a match. A magnesium fire starter we’d purchased is equally unsuccessful. The starter logs aren’t much better. We wonder: how can houses burn down if It’s so hard to start a fire? Finally, with the help of several starter logs, whatever newspaper we can scrounge from the car, and illegally gathered sticks and weeds, we get a blaze going.

It’s not a moment too soon. As the sun disappears, the temperature plummets. It was in the 60s when we arrived, but now we watch in horror as our thermometer heads down through the 50s and into the 40s. We were not expecting this! We dress in many layers and huddle into our sleeping bags?and I pull Kiersten, ?cocoon? and all, into my bag to keep her extra warm?but my face and feet are still cold.

It’s coooooold this morning! I force myself to leave the protective coziness of my sleeping bag around 7:30 a.m. Adam has already started a fire, but It’s no match for the 40-degree air temperature. Gradually the sun warms us, but It’s a while before we’re comfortable. we’re also a little sore from the bumpy ground.

This morning I try cooking over a campfire for the very first time. It’s a huge success. Whether It’s because we ate lightly last night, burned energy trying to stay warm, or that food cooked outdoors just tastes better, we thoroughly enjoy breakfast.

Since we arrived so late yesterday, we haven’t yet had the opportunity to explore the Park. One of the biggest attractions is the Going-to-the-Sun Road, a scenic route through the Park. However, it takes two or more hours to drive one way, and we’re car-weary after 12 days of travelling. Instead, we decide to hike a waterfall trail. 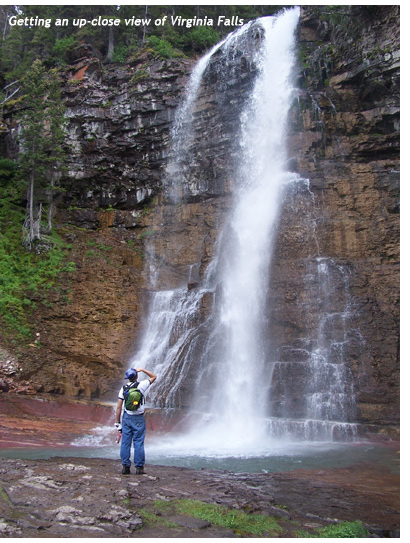 It turns out to be an excellent choice. The falls are beautiful, and one is so tall and powerful that it makes its own wind! It’s also good to be outdoors rather than in the car. Later, we return to our campsite refreshed . . . and hungry. Kiersten enjoys cooking hot dogs and marshmallows over a campfire, although She’s nervous about getting too near. This is fine with me, of course.

Tonight, the temperature drops even earlier, and we’re dreading another cold night. One advantage of the cold, clear air, though, is the beauty of the night sky. Without haze or light pollution, we’re seeing so many stars and galaxies that we can’t distinguish very many constellations. We do see a planet, which we later learn is Jupiter. Stargazing together feels magical, but the cold ends the moment prematurely. It’s time for another chilly night!

This morning, there’s frost on the ground, in August, no less, and the temperature is 37 degrees. We can’t believe It’s so cold! A well-meaning fellow camper assures us that Yellowstone National Park, where we’re headed next, is much, much colder. It’s not very heartening.

However, we can feel good about one thing: we’ve survived our first camping adventure! Cold, fires, lumpy ground, and a two year old?we conquered them all. We’ve also learned a few things for our next camping trip tomorrow, namely things we need: thermal underwear, thermal socks, gloves, and especially an air mattress!

Although we tried packing last night, taking down the campsite seems to take a while, as many of the bags in the car were shifted around when we removed the camp gear. We finally leave after 10. Tonight, we’re staying in a hotel just outside Yellowstone. It’ll give us a chance to shower, do laundry, and generally enjoy civilization before communing with nature again.

The first part of our drive seems to last forever. The landscape here looks like plains-type farmland, but It’s in the shadow of the Rocky Mountains and the effect is a little surreal. We finally arrive in Helena, Montana, mid-afternoon. It’s a good-sized city and will give us the chance to stock up on food and supplies.

The food is easy, but the supplies less so. No one in town, from Wal-Mart to dedicated outdoors stores, seems to be selling anything thermal. ?It’s out of season,? we’re told. We do find an air mattress, though. Perhaps we’ll freeze in Yellowstone, but at least we’ll be comfortable!

We do find it difficult to believe it will be so cold, though. The temperature in Helena is quite warm, in the upper 80s. It’s an adjustment for us?a difference of 50 degrees since this morning! 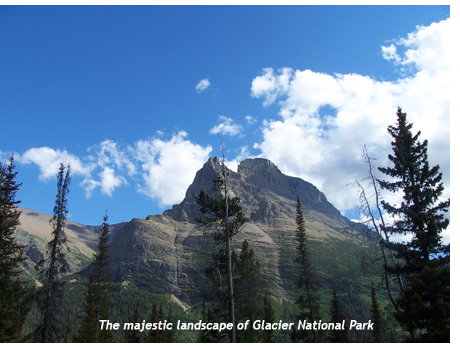 Getting out of the city is a nightmare, and we aren’t back on the interstate until 5:30 p.m., with two hours still to go. It has been a long day, but we’re holding up. Kiersten has even taken a liking to Enya; it means we have to listen to ?Orinoco Flow? on repeat, but It’s infinitely preferable to ?Bippity Boppity Boo.?

When we finally arrive in Gardiner, Montana, just outside Yellowstone, we can just make out the famous Yellowstone arch through the growing dark. It’s after eight, so we’re very glad we didn’t decide to camp tonight. Tomorrow morning, we’ll do some sightseeing in the Park and leisurely set up our campsite. Here’s hoping for continued success camping, and warmer nights!