Articles
The Voice
In Conversation With . . . Del McCoury

Del McCoury is a bluegrass performer who took up the banjo after hearing Flatt and Scruggs playing on a 78 record. Del has worked with Bill Monroe, Steve Earle, and Phish, among others.

Del’s new CD, Moneyland, features famous country artists of all political persuasions working together to raise awareness of the plight of poor rural Americans. The following are notes from a conversation with Wanda Waterman St. Louis.

The Roots of Moneyland

The idea for the album actually came from the song ?Moneyland? by John Herald, which appears on the album. About three years ago Artie Traum in New York sent me that song. I used to know John Herald but he’d passed away, and so has Artie since then. I really liked that song and I told my manager I’d like to record that on my next record. And he said, ?We should probably do an album around that song.? We wanted to bring attention to the plight of men and women in Middle America. Even three years ago they were having it pretty rough, and It’s even worse now.

This record was finished maybe a year and a half ago but for some reason we just didn’t put it out then. It timed its own self, I guess.

So many folks now can’t afford medical It’s just like it was back then. we’re the richest country in the world and yet there are people who really need help in this country. And all we knew to do about it was just sing about it so That’s why we put the record out.

Sometimes we had a little trouble getting something released. Bruce Hornsby didn’t really want to release that song ?The Way It Is.? He thought it had been played to death. So we said, ?We got some ideas. How about we do something with it and send it back to you and let you listen to it??

So we got The Fairfield Four to back him up. Now those guys are really good, and when that bass player sings those low notes, it makes the window panes rattle. We sent that to Bruce and oh, man, he liked it. He said, ?Let’s release that thing.? So we did.

That song, ?Carry Me Across the Mountain,? That’s a true story about a woman named Hazel. Her daddy had given up on her because she was real sick and there were no doctors around there and no medicine. But her mother walked, carrying her, over a mountain to get to a doctor there in West Virginia. 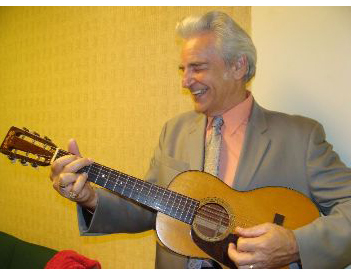 The Way It Was

We were from western North Carolina but I grew up on a farm in York County, Pennsylvania. My folks moved there before the war. Before the war there was a huge migration from out of the mountains to cities like Baltimore, Detroit, and Ohio, but folks from South Carolina all came to Pennsylvania to work in the Martin airplane factory, the shipyard, and the steel mill there. And after the war started all my kin folks came out there.

When the war started my dad decided to buy a farm so we could raise our own food. He thought we might starve to death after the war was over. The economy was good during the war but he thought he should invest in a farm for when it was over. He ended up dairy farming and That’s what I grew up helping with. It was hard work. I didn’t ever want to farm when I grew up so I started doing music.

Before too long I ended up playing with Bill Monroe. Bill was really open-minded. He was a man of few words, and he would never say, ?Now sing this like this, or play like this.? Musicians learned from his example more than anything. And I think he learned from the musicians he had in his band through the years.

The hardest thing for me was learning all those songs all at one time. One day I’d be the sideman playing the banjo and singing on a chorus here and there and then I’d be asked to play rhythm guitar and sing all the leads. That was the biggest challenge, but when You’re young you like a challenge.

All Bill expected was for you to get out there and work really hard. If he found out a guy in the band was lazy he’d ride him until he quit. He grew up hard, and when he was out on the stage he expected all the musicians to really put it out there.

The Way It Is

I don’t really know what happened here lately or how to fix it. we’re getting ready to vote right now and we really don’t know who to vote for. The politicians are saying what all they’re going to do when they get elected, they’re saying absolutely they can do this or do that. Now they know better than that! When they’re in office they still have to convince the Senate and the Congress and all of them and they’re not going to convince all those guys. That’s probably what angers me more than anything.

America is the best place in the world. I’ve travelled all over the world and we are just so blessed compared to people in other countries. Even with the problems we’re having now It’s still the best country. But we still have to help the poor.