Mama’s Hungry Eyes No Longer a Thing of the Past

I’d rather live by the side of the road
And try to point souls to the blest abode
Than to be a king or a millionaire
And live in mansions in bright array . . .

written by Albert Brumley, from a medley sung by Mac Wiseman on Moneyland

A few years ago Del McCoury’s wife, Jean, lost the pension from her old job in Pennsylvania. Fortunately they weren’t leaning on this income for their retirement, but their life was not the norm; the McCourys watched friends and family from small rural towns lose their livelihoods and retirement incomes as jobs disappeared and pensions went up in smoke.

These recent economic hardships had come after a long era of banks foreclosing on family farms, after country folks had made the long?and sometimes painful?adjustment from the family farm to jobs in factories. 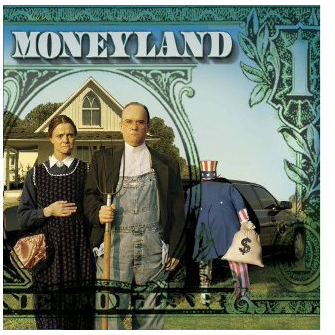 The decline in living standards for rural Americans has for this album brought together performing artists from all shades of the political spectrum, united in their desire to rouse the country to respond to the worsening plight of rural Americans.

Moneyland came out before the announcement of the current crisis in the markets. The album’s message would almost seem prophetic except that the crisis was already old among the rural poor in North America. Personally, when I heard about the recent stock market plunge it was hard to muster up a sense of panic. All I could think was, Well, now they might find out what us poor slobs have been putting up with for years. I’m not alone.

If American CEOs and politicians had been paying attention to the widening gap between rich and poor Americans they might have sensed, as only a few pundits did, that it was only a matter of time before their number would be called. Exploitation of those in positions lower than your own is no one’s birthright, and it certainly is not an infinite resource.

The current environmental crisis is another huge clue. In a mysterious way the fate of people who live off the land is closely tied to the relative prosperity of the land itself. As nature fares, so fare the common folk.

Moneyland opens with an excerpt from Roosevelt’s fireside chat. Reassuring and comforting in its day, Roosevelt’s talk comes across today as a reproach and a challenge to those who invoke the name of a freedom-loving America as a license to exploit and oppress the very people who form the country’s lifeblood.

Let’s look at the big picture country music has painted: our ancestors were pioneers who worked heroically to carve out a living with next to nothing. Mama suffered and we all went without but we had love and we knew honesty and hard work would eventually bring well-being.

When things got better it was easier to sing songs about those hard times, with some songs about cheating and divorce and fancy cars thrown in to spice up the stew.

But then things got tough again?depression, recessions, dust storms, wars, and bank foreclosures?we turned back to traditional songs, the same songs that sweetened the bleak hours back in the days of washboards and hand scythes. The new hard times bred their own songs, which would be sung when things got better once again. And on it goes.

When Emmylou Harris sings ?Mama’s Hungry Eyes? She’s no longer singing about the dust bowl or the Depression?She’s illuminating a state of affairs in America right now.

When Merle Haggard sings ?If We Make it Through December? he’s telling the story of countless retirees right now who worked hard and steady all their lives just to stare into next winter not knowing what they’ll have to live on.

It has often been assumed that country music fans are all extreme right-wing nutcases with arsenals and a white supremacist agenda. This is partly just pig ignorance, but It’s also a direct result of the fact that country music’s inquiring minds are simply too much on the money to be tolerated by the mainstream.

Let’s hope this album does something to change that.

Moneyland manifests seven of The Mindful Bard’s criteria for music well worth a listen: 1) it is authentic, original, and delightful; 2) it confronts, rebukes, and mocks existing injustices; 3) it renews my enthusiasm for positive social action; 4) it gives me tools enabling me to respond with compassion and efficacy to the suffering around me; 5) it displays an engagement with and compassionate response to suffering; 6) it inspires an awareness of the sanctity of creation; and 7) it harmoniously unites art with social action, saving me from both seclusion in an ivory tower and slavery to someone else’s political agenda.

In Conversation With . . . Del McCoury