Features
The Voice
This World – Across the Continent in 22 Days, Conclusion

This is the final instalment in a series chronicling the adventures of the author; her husband, Adam; and two-year-old daughter, Kiersten, as they travelled by car from Alaska to Louisiana in summer 2008. 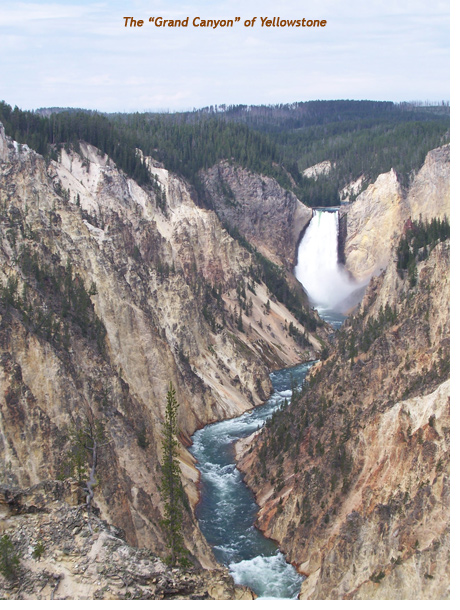 It rained last night, but we stayed dry! However, the dampness gives us trouble when we try to start our breakfast fire. Although eventually we get our food cooked, we’re already running behind when we start driving toward the trailhead to join the guided hike. Then we get held up by countless caravans of RVs and, to top it off, a herd of buffalo crossing the road. When we arrive, we see a ranger and his group of hikers disappearing down a trail. Although we bolt from the car, by the time we reach the trailhead, they’re long gone.

After consulting our guidebook, we decide to attempt our own hike. we’re in the so-called Grand Canyon of Yellowstone area, and a three- to four-mile hike will take us to a very scenic view.

It turns out to be so pleasant, we’re glad we missed the other hike, as interesting as it would have been. Although the trail goes uphill somewhat, It’s not as painful as our Kluane hike a week and a half ago, and the beautiful views of the Canyon and its waterfalls more than make up for it.

At the end of the trail, there’s a flat, grassy area where we let Kiersten play among the roots and stumps to get some energy out. We had a good workout, but She’s been stuck in the hiking backpack and needs to stretch her legs. She happily wears herself out and falls asleep on the hike back. In fact, She’s still sleeping when we reach the car, and we’re reluctant to interrupt her first nap in days. Adam decides to check out the Canyon’s visitor centre while I sit and catch up on my journaling as Kiersten sleeps.

I spend the next hour sitting under the trees, listening to outdoor sounds as I write. I feel the gentle breeze and I realize I’ve never felt so close to nature.

There’s something about writing that opens the soul, and writing outdoors allows the wilderness to enter. It’s an amazing feeling.

This evening, after enjoying marshmallows over the campfire, Kiersten spends some time playing with some little girls from the adjacent campsite. When they ask where she lives, she says (to our chagrin), ?Campsite!?

We realize that although this travelling adventure must be exciting for her, It’s also disorienting for someone so small.

After Kiersten goes to bed, we focus on packing the car so we can get out early tomorrow morning. Our great camping experiment is nearly over, and to my surprise, we both like it?particularly when the weather isn’t freezing. Here at Yellowstone, the temperatures have remained pleasant; in fact, last night we didn’t even need our cold-rated sleeping bags.

Tomorrow, we’re setting out on the last third of our trip. From here, It’s slightly west and then straight south toward Louisiana! 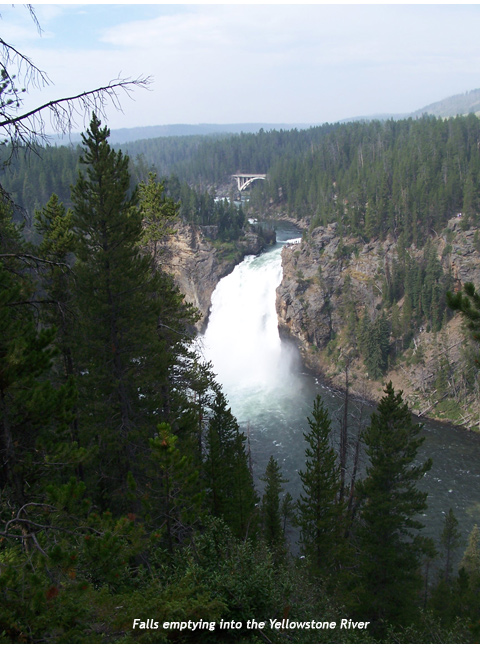 This morning after leaving Yellowstone, we pass through another national park: Grand Teton, which borders Yellowstone to the south. Grand Teton is home to the mountain range of the same name. Roughly translated, It’s the French-Canadian equivalent of ?big breasts.? We don’t see the resemblance, but we marvel at how far from Quebec French-Canadian influence has been extended.

Although we’re delayed by construction just outside Grand Teton, the speed limit jumps to 75 mph and we begin making good time. From here to our resting point in Casper, Wyoming, there aren’t many towns, so we can go at a fairly consistent speed.

We do stop to take some pictures of the area. The terrain is different than in Yellowstone and Grand Teton: It’s red, rocky, and dry. The formations are jagged and look like they belong to a different planet. we’re consistently amazed by the wide diversity of landscapes that can be seen up and down North America.

The higher speed limit means we arrive in Casper earlier than we’d expected. We can relax, eat dinner, and take Kiersten to the pool. The temperature here is in the upper 80s, and we realize that we’re finished with the cold-weather portion of our trip. I wash and pack the jeans and sweatshirts, and take out the sundresses and shorts. South, here we come!

Packing takes a while this morning. Trying to repack for maximum efficiency’since I know we won’t be using certain clothes again on this trip?always takes so long that I wonder whether I’m saving time in the long run! We eventually leave around 10 in the morning. Today we’re headed for Denver, and since It’s a shorter drive, the late start shouldn’t significantly hinder us. we’ll be visiting and staying with friends whom we haven’t seen in five years.

Most of the drive is uneventful and flat, with mountains in the distance. The traffic picks up significantly once we arrive on the outskirts of Denver. Once again, I’m surprised at its size. So much of this trip has been spent in the wilderness, whether driving or camping, that I’m unused to large cities!

Our friends live just south of Denver. It’s great to see them again after so many years. We meet their children for the first time, and they meet Kiersten. And Kiersten meets their toys! It’s her first time in a house in more than three weeks, and she makes a beeline for the toy box. It’s not until after dinner that she discovers the other kids exist.

This morning, after church and brunch, we say goodbye to our friends. It was a great visit, but we’re pretty tired today. Being in a house again reminded us how desperately we want to be settled. For the first time, we wish we were done driving already!

It doesn’t help that we’re running late. Brunch took much longer than we expected. Then, at a grocery stop on our way out of the city, we discover that Adam’s credit card is missing. After 15 minutes of panic, we find it at the restaurant?but imagine if we hadn’t discovered its loss until we were already in Kansas!

Still, It’s nearly two by the time we leave Denver. Not far from the Colorado/Kansas border, we cross into the central time zone. This is our last time-zone change; It’s good news, since it feels like we’re really in the home stretch now, but it puts us even further behind schedule. We start looking for a place to spend the night.

Here in western Kansas, towns?or at least, towns large enough to boast hotels?are few and far between. The highway is surrounded by a lot of fields, and not corn and wheat fields like I expected. There are countless sunflowers, and we learn that this crop is so predominant that Kansas’s nickname is the ?Sunflower State.? We finally pull over in a small town, and hope we can make up for lost time tomorrow. 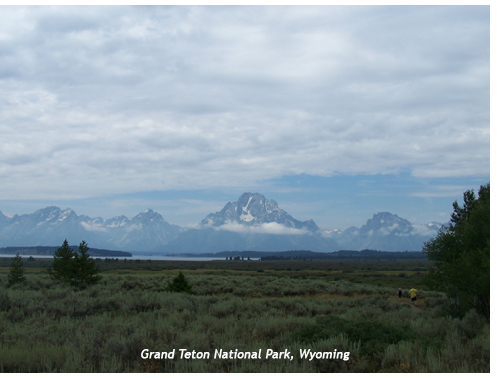 It’s our second-last day of driving! With that encouraging thought, we pack the car in record time and head out. We have a hundred or so miles to make up today, but we can do it easily.

Driving through central Kansas gives us views of flat plains and farms reaching far into the distance. We arrive in Wichita around lunchtime, but our plans for a quick break are dashed when we get lost twice trying to get to a supermarket. When we finally arrive, It’s closed. we’re discouraged by the delay, and the cold and rainy weather reflects our feelings.

Things pick up after we enter Oklahoma. The weather clears, the temperature rises, and by dinnertime we find ourselves in Oklahoma City. Because the rush hour traffic seems so congested, we decide to delay dinner until we pass the city. It turns out to be a good decision, as we discover our favourite taco joint, and next to it, one of our favourite stores. We spend so long there that now we’re really behind. It’s after seven and Kiersten’s almost falling asleep in the car. we’re going to have to make up our lost time tomorrow. 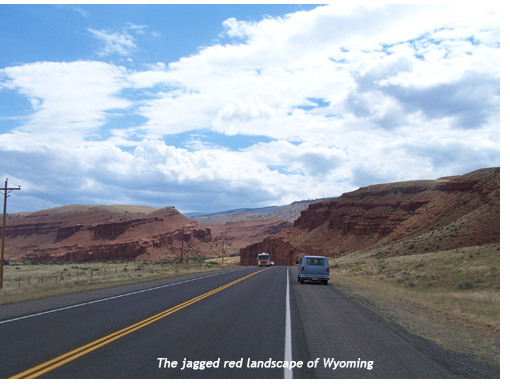 It’s finally here?our last day of travel! We’d initially planned to arrive in Louisiana early in the day. However, the last few days have put us a hundred-some miles north of where we’d hoped to be. And as we’re getting ready to leave, we discover that Pauls Valley is home to a toy and action figure museum. Adam persuades me that It’s our last chance to sightsee, so in we go.

The museum is surprisingly well curated. And they have a fantastic kids? play area, complete with Legos, cars, and?gasp!?a Cinderella dress that puts Kiersten over the moon. We have difficulty persuading her to get back into the car for more driving.

Although the museum stop delayed us an hour or two, we’re still making good time as we press on through southern Oklahoma. We are taking a slight detour to Dallas, Texas, where our other car has been shipped. It means an hour or two extra driving, but we prefer to do it now rather than make a separate trip. At this point, for the next month, we’re only going to walk places!

As we drive west through Texas, I notice how much higher the humidity is here: my hands are sticking to the steering wheel. We pick up our car and head west. Now, we really are in the home stretch. Next stop, Shreveport, Louisiana!

It’s a pleasant drive, even though we’re travelling separately now. Kiersten is very well-behaved for someone who largely has to entertain herself. It might be helping that we moved a lot of the bags to the other car, so the back seat feels roomier. I think, though, that she somehow senses that Louisiana?and stability?is just around the corner.

After several hours, we take a break and calculate that we have another hour and a half left to go. we’re amazed when we arrive at the Texas-Louisiana border only 15 minutes later! Shreveport is just another 20 miles ahead.

And then It’s 10 miles further, then five?and we’re there! It doesn’t seem possible, but after 22 days on the road, 5,000 miles, and $950 in gas, we have finally arrived at our destination. We’ve seen an enormous range of landscapes: from glacial mountains to subalpine forests to rocky buttes to flat plains to tree-lined southern streets.

We’ve stayed in cabins, hotels, bed and breakfasts, and tent-camped under the stars. We’ve seen temperatures ranging from 37 degrees (Glacier National Park) to 97 degrees (Dallas, Texas). We’ve crossed paths with animals from buffalo to elk to gophers (but no bears). It’s been an adventure, with incredible memories. And are we ever glad It’s finally over!

Secretly, though?I almost can’t wait for the next trip . . . 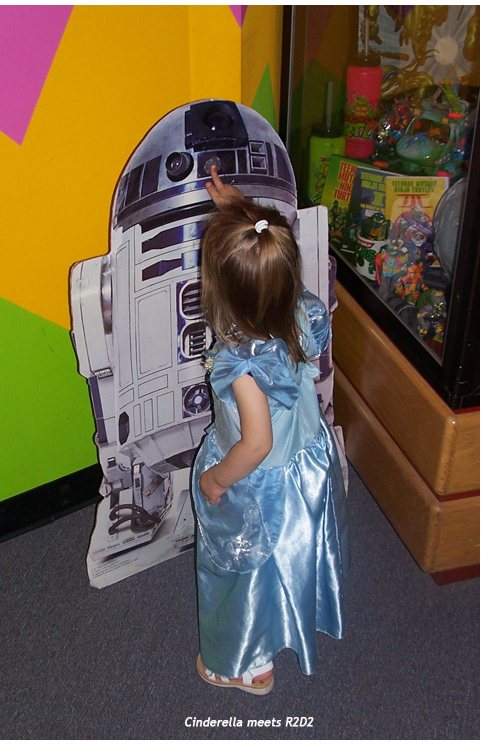 This World – Across the Continent in 22 Days, Part V

This World – Across the Continent in 22 Days, Part IV