Articles
The Voice
In Conversation With . . . Stephen Jenkinson: What Suddenly Breaks on Your Shore

Stephen Jenkinson is a palliative caregiver whose unique approach to palliative care is informed by profound personal recognition of the nature of death and dying.

His work is the subject of Griefwalker, a recently released National Film Board of Canada documentary by award-winning filmmaker Tim Wilson.

Jenkinson is currently on a country-wide speaking tour accompanying the film’s screenings. Donations taken in at screenings are given to hospice and palliative care facilities in the areas in which the film is shown.

Someone who knew me and who worked in a hospital asked me to become involved in the palliative care unit there. She said, ?This is your work.?

I said, ?How can it be my work if I’ve never done it?? I had been self-unemployed for the last 12 years, and I don’t do well in organizations. But I told her to give me a small discrete project and we’d take it from there.

The Silence of Men

She gave me this group of men?husbands, brothers, fathers, and sons of people who were dying. This group unnerved everybody, so they just wanted me to take them off their hands.

I asked what was so unnerving about these men and was told, ?They seem to fall into two groups; one group is violent, aggressive, belligerent, hostile, and obnoxious, and the other group is much worse. They don’t say anything at all.? 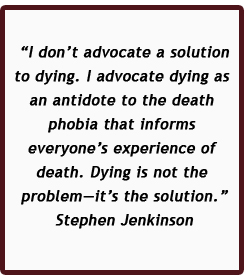 That’s the most terrifying thing there is for women?guys who don’t say anything. If somebody’s not too verbal You’re not going to be too impressed with him. You’re going to think of him as a problem to solve.

But I have an understanding of what male silence is. When faced with dying, his own or that of a loved one, the man is distraught beyond describing. I’m generalizing, but one of the instinctual responses for a guy in that circumstance is to withdraw.

If you’ve bought the idea that the gold standard of emotional health is what they call ?high-expressed emotion,? then any guy who doesn’t talk is unhealthy at the very least. So your solution for him is to crowbar his mouth open and get him to ramble.

I’m going to offer an alternative. With most men, early in their lives something wakens in them which sociologically is called ?the provider instinct.? Part of this, when they have families they feel responsible for, is a defending, protecting instinct. It’s very strong even though It’s been utterly disqualified, scoffed at, belittled, and slandered. Women led the charge initially but a lot of men chimed in. But there is such a thing and it has at least as much credibility, necessity, and merit as any maternal instinct.

The silence that is being misapprehended as passive-aggressive is that provider instinct pressed into radical service. What these men are trying to do is to keep their own mayhem away from the people that they’re trying to protect.

I planned to conduct the group for six to eight weeks but it went for 18 months. Somewhere in that 18 months I recognized that I was born knowing how to do this.

Now that wasn’t palliative care?it was more like the collateral damage of the dying. My first home-based palliative care visit was to the home of an oncologist. In the death room there were all these name plates with initials after his name and I thought, Honest to Christ, this guy’s a doctor! What are the chances that the very first dying person I have to work with is a physician? 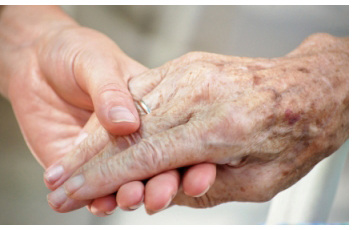 Then I found out he was an oncologist dying of cancer. The irony was amazing. I can’t say I did it fabulously well but as soon as I sat down I knew exactly what to do. I knew why I was there, which was something no one had ever told me.

The truth is that the training is so meagre and inadequate in this line of work that there is little explication of what you are actually there to do. One of my jobs over the years has been to say that there’s nothing self-evident to me about what passes for self-evident in this culture when it comes to anything to do with dying, diminishment, suffering health, or the instinct for help. Dying has no place That’s legitimized in the care of the dying.

I don’t advocate a solution to dying. I advocate dying as an antidote to the death phobia that informs everyone’s experience of death. Dying is not the problem?It’s the solution. Refusing to die when It’s your time, That’s the problem. When you accept that You’re dying it doesn’t mean You’re actually dying.

I reinvent the language. This is pretty much what I’ve got and what I teach so I insist the language carry the meaning that I intend. In English it is impossible to say I am dying in the passive voice. The English language is teaching us that, because you cannot use the verb ?to die? in a passive voice, dying is not a passive event.

When you realize that this is not a matter of grammar but of epistemology then what suddenly breaks on your shore is the knowledge that if dying is what you do then It’s possible to not do it. 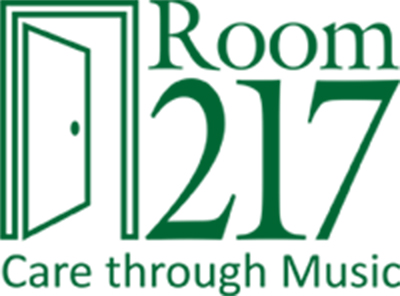 Room 217 – Creating Music Resources for Use in Health Care