Articles
The Voice
God is Great, God is Green 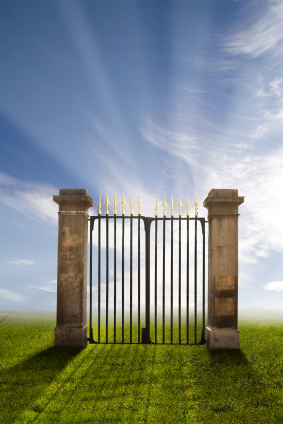 From the boy’s low-angle perspective of the world, his teacher, Miss Campbell, is a monstrously imposing presence. She wears bulging, flowery housedresses with flowing silk scarves, bright blue eye shadow, smeared like war paint, and penciled-in eyebrows, raised in a crooked and perpetual state of surprise.

Her crowning glory, though, is a fiery red bouffant that readily complements her short temper and sudden bouts of rage. Certainly, she is not averse to a strict regimen of daily admonishments and humiliations. She is ever ready to overturn a messy desk with Herculean strength, or turn over a disobedient student on her expansive lap.

She often speaks to the class about the goodness of God, but the boy has difficulty seeing the goodness in Miss Campbell.

One day, Miss Campbell calls upon the students to paint their own interpretations of God. The boy, being more familiar with pop culture than with religion, believes the title, God, to be the short form of Godzilla; thus, he assumes Jehovah and the Japanese monster to be one and the same.

This being so, he proceeds to paint God with bold, vibrant strokes of green. Indeed, the finished piece rivals Michelangelo’s The Creation of Adam?the only difference being the inclusion of scales, claws, and sharp teeth.

One of his classmates laughs hysterically at the portrait, and the rest of the class joins in for good measure. At this point, the boy slowly begins to comprehend the scope of his divine faux pas. He knows that some of the other students attend Sunday school on a regular basis, and he now realizes that they likely have a better-informed opinion as to God’s skin colour.

The boy’s own skin colour turns many bright, burning shades of red. But, surprisingly, Miss Campbell does not say a word. She simply takes the boy’s portrait of the false, green god, folds it neatly, and drops it into the wastebasket.

The boy walks home from school that day somewhat enlightened, but still confused. For his six-year-old mind cannot grasp the concept of God being part of his life. As far as he is concerned, he has something much more powerful that resides in his own home; to be sure, there are two demigods who sleep right across the hallway from him. Though, in truth, his parents are only mortals, they have far more impact on him than any abstract, ethereal presence could ever have. For the boy, salvation comes from them alone.

Salvation comes when he wakes from a dark dream, panicked and crying; his mother is there, performing late-night puppet shows, easing him back into golden slumbers. She is there in the pool, at his first swimming lesson, as he struggles and splashes fearfully in the water. She is there when he awakens; she is there when he falls asleep. She is omnipresent.

Salvation also comes when he runs home in fear of the bullies; his father is there, scouring the neighbourhood in pursuit of pint-sized tyrants. He is there to hold the airsick boy after his first flight, ignoring the fresh trail of vomit running down the back of his new business suit. He is there with answers, and advice, and altruism. He is omnipotent.

The boy may not know the colour of God in Heaven, but he does know that if his mother and father are made in His image, God must be good.