Columns
The Voice
Music To Eat Lunch To – Rise Against: Appeal to Reason 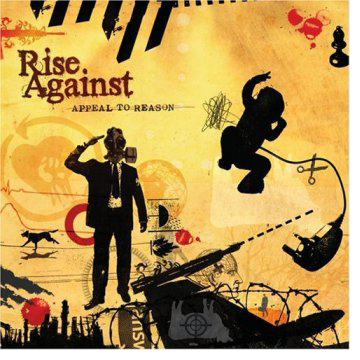 Simple, succinct, and although just as clever and thoughtful as any Rise Against lyric ever written, this is a somewhat melancholy, retrospective album theme for the band.

Appeal to Reason is not the thrash-punk record that Rise Against fans know?you won’t find songs like ?Nervous Breakdown? or ?To Them These Streets Belong? on Appeal to Reason; instead what you will find is a penetrating, baser feel to the songs, much more akin to ?Swing Life Away? but also much fiercer.

In listening to this album, I’ve come to feel that this band, so much the inspirational, activist group of men, has become angry at the lack of mobilization throughout the populace, especially within the ranks of their fan base. Or maybe That’s just my own guilty conscience emerging. Sometimes these things are impossible to tell.

Although the music on this CD isn’t so piercing and hard-core when it comes to the writing and performance, what you will find is a fundamental punk core that keeps the flow natural and alive while the band members produce songs that are, as always, incredibly moving and meaningful.

?Savior? gets to the root of the constant Rise Against theme, albeit in a softer and more individually tragic way: “I don’t hate you boy, I just want to save you while there’s still something left to save.”

If any band, punk or otherwise, knows how to convey the hardships of keeping your morality and presence in this world (especially since the departure of Good Riddance) it is Rise Against, and regardless of tone differences between Appeal to Reason and other records like The Unraveling or Revolutions Per Minute, the message is still clear: get up, get out, and do something to make the world better.

To me, the star song on this album is ?Re-Education (Through Labor).? It’s one of the edgier tracks: harder, seamless, and the best bet for the makings of a great mosh pit. Of course, It’s the lyrics that really pull me in and get me hooked:

The band is, per usual, doing a massive tour to support the new record and is currently on the Canadian leg, so get out there and see them live!