Columns
The Voice
The Mindful Bard – The Iguanas, If You Should Ever Fall On Hard Times

CD: The Iguanas, If You Should Ever Fall On Hard Times

from ?Warm Sun,? If You Should Ever Fall On Hard Times

The first time I heard of the Iguanas was on the film New Orleans Music in Exile by Robert Mugge, on which they do a touching performance of ?When I Get Home.? The spicy mix of musical flavours was alone enough to lure me in. But at the time I was convinced that New Orleans could never again be what it was before Hurricane Katrina. The only thing that would change my mind, I decided, was seeing the Iguanas back in their hometown recording a new album.

The Iguanas weren’t in their native New Orleans when Katrina came ashore. They were in Massachusetts, partway through a tour. Thanks to some nice folks in Texas they set up base camp in Austin, settling their families there, and performed occasionally in the city while continuing their tour of the country.
The songs on this album were written in Austin and eventually recorded back in New Orleans.

Apparently, despite initial prophecies of doom (including my own), and despite the terrible aftermath for so many of the city’s residents, the hurricane didn’t really do more than knock the wind out of the New Orleans music scene.

Note similarities to the expulsion of the Acadians from Nova Scotia in 1755: families were split up, many lives were lost, some stayed where they were sent, others came back, some were helped by strangers and some were not, and the flowering of a rich cultural heritage was put on hold. But whether they returned home or stayed away for good, the displaced enriched culture wherever they put down their feet.

None of that changes the fact that the expulsion was a crime. Neither do the post-Katrina restoration and rebuilding of music venues and historical buildings change the fact that Katrina was a monstrous tragedy. 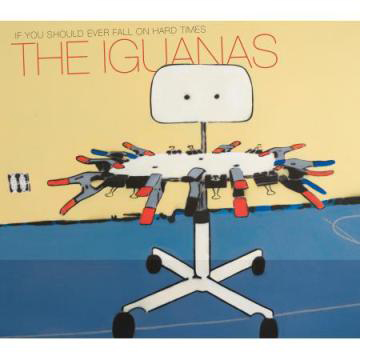 However, in the end, is it really possible to lose your culture?

Sure, you may be forcibly separated from your culture; you may even deliberately reject it. But when you return to it you will recognize yourself in it and desire to participate in it once more. Thus cultures continue to grow and change despite natural disasters, genocide, oppressive rule, and the temptations of a mass culture.

The Iguanas are only a fragment of the colossus that is New Orleans music, but a meaningful fragment holding a microcosm of New Orleans, the dreamy underworld of American consciousness. The deep, rich, expressive vocals and the skilful élan of the musicians put this band over the top. Take a slow and mindful stroll through these songs for one long, strange trip:

You’ll start off in a smoky bar listening to a comely diva, then take a drive across the US-Mexican border in a pickup truck with Herb Alpert in the back, only to end up in another grimy dive bawling over a painful breakup.

Then you’ll be in a shanty town keeping a stubborn old man and his dog company during a hurricane and thence drift into remembering another old man and his sad life, then take a walk through dark city streets on a clear night, stumbling on a mariachi band that forces you to sing a song before staggering into a strip club to watch the gyrations of a young beauty you once tried to rescue.

Then You’re in a cheap motel room watching an old movie full of Vespas and go-go dancers before heading off down the road to Morgan City, 70 miles west of New Orleans, and then back home to New Orleans herself.

Once again that wanton city, now dishevelled and with a few teeth knocked out, opens her arms wide to whatever riches of wisdom and musical influence your travels may have won you.

If You Should Ever Fall On Hard Times manifests four of The Mindful Bard’s criteria for music well worth a listen: 1) it is authentic, original, and delightful; 2) it displays an engagement with and compassionate response to suffering; 3) it inspires an awareness of the sanctity of creation; and 4) it provides respite from a sick and cruel world, a respite enabling me to renew myself for a return to mindful artistic endeavour.

In Conversation With . . . Rod Hodges of the Iguanas