In the nineteenth century, when the first boatload of displaced Acadians returned to Nova Scotia, it was to a rocky beach hemmed in by a wild forest. After years of petitioning the British government the displaced Acadians, whose former territories had included the fertile Annapolis Valley, had at last been grudgingly granted several tracts of the least arable land in Nova Scotia.

When the men got off the boat and saw the desolate landscape without a dwelling in sight, they sat down and cried. The young Madeleine LeBlanc is said to have pluckily remarked, ?This isn’t a time to cry, It’s a time to work!? and immediately set herself to cutting down the first tree for their overnight shelter.

What does Jeanne Doucet Currie do with a story like this? She writes a tribute song.

Serrons-nous la main is at heart a joyful tribute to the strength of the Acadian spirit. The title, which means something like ?Let’s Clasp Hands,? is a line from Jeanne’s song ?Chère Évangéline!? a nod to the legendary heroine on whom Longfellow based his famous poem.

In the photo on the back of the CD Jeanne, in traditional dress, is posing with a famous series of sculptures of an Acadian family; she is holding the little girl’s hand and passing the Acadian flag to the mother. 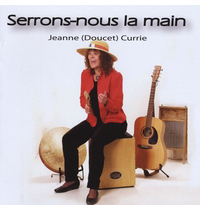 It is a moving salutation to her ancestors and their determination to return to the land they loved. There are other accolades here as well.

?The Children of the Land? is a rousing thank you to the Aboriginal peoples of the New World who sided with the French against the English and even harboured many Acadians who refused to be deported.

The history of the Acadian deportation and its aftermath is a huge mine of creative material from which poets and songwriters have drawn for years and which is still far from being exhausted. But mining it well isn’t easy. Jeanne Doucet Currie is one of those songwriters who manage to be witty, funny, and poignant, sometimes all at once. She is true to her roots without being exclusive, regional while keeping one eye on the world at large.

I’ve seen her perform on several occasions; the woman is friendly, gracious, and utterly free of snobbery, just as ready to get up and sing ?The French Song? with a bunch of local amateurs as she is to deliver a studio-quality rendition of ?Les p?tits Coups de Rhum.?

Everybody is having such a grand time on this album. Jeanne is a wonderful singer, sounding like the precocious love child of Edith Piaf and Hank Snow. And what great background musicians! There is a tender sweetness in the fiddle, banjo, mandolin, and guitar that brings out the latent sadness in some songs and enriches the joyful quality in others.

Much has been made of Cajun music, created by Acadia’s Louisiana diaspora, and for good cause; it is among the liveliest of musical syncretisms, the resounding voice of a people bouncing back from the precipice to a merry fiddle tune. 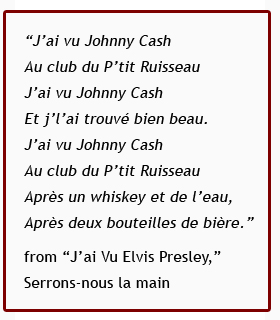 But while Cajun music was brewing blues, Hispanic, and country music into a big salty gumbo those Acadians who returned to Acadie were baking up Celtic, country, bluegrass, Mi?kmaq chants, and Appalachian influences into a great big fragrant râpure.

There is an important thematic difference as well?the distinction between those who accepted the loss of their homeland and those who did not?and it shows in the songs.

In the Maritime provinces French songwriters and performers have long been keeping the tradition of return and rebuilding alive and well. Jeanne Doucet Currie is a shining paragon of the genre.

Serrons-nous la main manifests seven of The Mindful Bard’s criteria for music well worth a listen: 1) it is authentic, original, and delightful; 2) it confronts past injustices; 3) it displays an engagement with and compassionate response to suffering; 4) it inspires an awareness of the sanctity of creation; 5) it is about attainment of the true self; 6) it provides respite from a sick and cruel world, a respite enabling me to renew myself for a return to mindful artistic endeavour; and 7) it poses and admirably responds to questions which have a direct bearing on my view of existence.