Because the couple had rented the house in mid-July, when the mosquitoes were clouding and clotting and droning like nature’s own hurdy-gurdy in the summer air, they never gave a passing thought to the ancient furnace sitting silent and still in the basement, or the single-paned windows throughout.

By mid-December, the city was locked in ice. The hospital waiting rooms were filled with frostbite victims. City buses were often to be seen stranded, like crippled Russian submarines in a Moscow dry dock. Cars slid sideways down the hills. Lost and discarded items—single gloves, tinfoil wrappers, chocolate milk cartons, used condoms, ballpoint pens—were preserved on the sidewalk like fossils under layers of ice, layers of melt and freeze, melt and freeze.

The furnace in the couple’s basement, black and infernal, appeared to be a relic of the early Industrial Revolution. When overtaxed, it would give forth alarming death rattles, chokes, and sputters. Afraid it would ignite like a ball of magnesium, or else poison them in their sleep, the couple kept the heat turned down to a minimal 10 degrees Celsius.

They went to bed early every night bundled in long underwear, toques, wool sweaters, work socks, sometimes even gloves and scarves. They filled leaky hot water bottles. They rubbed each other’s hands and feet. To help with the ruinously immense electric bills, they read books to each other by candlelight. They read Moby Dick and Nostromo, and drank mint tea made on a camp stove. To pass the long nights, they improvised extravagant erotic fantasies. They were the last survivors of a doomed Arctic expedition. They were medieval settlers of the Faeroe Islands, feasting on roasted puffin and the blubber of pilot whales, making love in the midday darkness, and listening apprehensively to the howling wind for the sound of approaching Viking oars.

Their old eiderdown comforter was streaked and spotted with candle wax. The inside of the bedroom windows were layered with baroque formations of frost and ice. The headlights of passing cars would illuminate miniature landscapes in the windowpanes—sculpted crystal vistas of mountain and bottomless frozen lake, winged creatures and Gothic towers—far more ethereal than the stained glass of any cathedral. Night after winter night the couple would fall asleep huddled together for warmth, each of them drifting into their vivid, isolated December dreams of white owls, black wolves, icebound sailing ships.

One night, a terrible wind swept down from the north. The fragile, brittle bedroom windows cracked, then shattered. Gusts of snow swept across the room. The dreaming lovers slept on.

In the morning, when she woke, the woman found that her partner had frozen solid in the night. His features were caked with frost. The hair that fell down below his toque was bright as tinsel. He was stiff as a board. Not knowing what else to do, she sat above him and cried scalding hot tears in the hopes they would thaw and revive him. They merely ran in tiny rivulets, and froze.

Remembering old fairy tales, she put her lips to his for an enchanted kiss. They froze there, like a tongue to a Winnipeg February lamppost. With one hand, she reached for the phone, and dialled 9-1-1. When the fire department arrived and freed her, they covered the man with thermal blankets, and left to attend other disasters. Alone with him again, she waited day and night for the thawing to begin. If anything, he became progressively more solid. 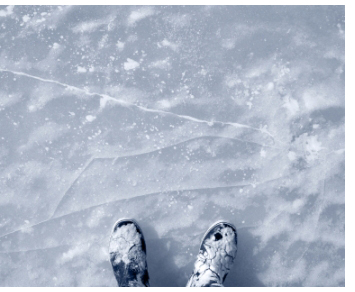 One morning, wanting to make the best of the situation, she levered and manoeuvred the iceman, as she had come to think of him, from the bed. She dragged him down the stairs, and propped him up beside the kitchen table. She chatted to him about her plans for the day as she cooked and ate her fried potatoes and eggs. Struck with inspiration, she carefully placed him on a long black plastic sled, and took him with her while she went Christmas shopping in the village. She bought him long underwear, and books of inspirational poetry, so she could read to him and keep his spirits up in case this condition should last throughout the bleak winter.

One night, overcome with a decorating mood, she propped him in the living room window, and wrapped him all around with strings of multicoloured Christmas lights. Passing families gathered outside to stare in wonder at the beautiful frozen man. They smiled and waved. They sang ancient yuletide carols. All night long, the man blinked gaily on and off, lightening the darkness.

That very night, in her dreams, an angel came to visit her, and told her what she should do. While the city still slept, she drove to her father’s house. From his garage, she borrowed the ice auger he used on his winter fishing trips, and heaved it into the trunk of the car. Stopping by her house, she put her man once more on the sled. Using her best knots, she tied the sled to the bumper of the car, and drove with commendable care to the river’s edge. Getting to work with the auger, she carved a man-sized hole in the thick ice. She pulled the sled to the edge of the hole, and deftly manoeuvred her partner into position. With one final push, she watched him slide into the water, then sat back and waited.

As the long minutes crept by, she began to worry that the angel had lied, or that she had put too much faith in her dreams. Her hands were becoming numb, even through her gloves, so she gathered pine cones and twigs from the river’s edge, and made a small bonfire beside the hole. She grew more and more anxious, then frightened. Her tears fell into the gray, early morning water.

Then, at the precise moment she was about to give up all hope, she saw a faint flicker of movement beneath the ice. Peering down, she could see her lover, his face and hands held to the ice as though they were pressed against a window. He waved slowly, and gave what she thought (it was difficult to tell, precisely) was a rueful sort of smile. She gave a cheerful grin and wave in return. She placed her lips to match his, and they shared an ice age kiss?no less warm for inconvenient distance separating them. Following her direction, he swam to the hole in the ice, but refused to get out. Strangely, she seemed to understand. In compromise, he reached an arm out of the water. For hours, until she could no longer delay getting on with her day, they held hands.

Every night that winter, she came to the frozen river to visit her icefish, her beautiful pale green merman. If he wasn’t there, waiting for her in the usual spot, she would summon him by shining a powerful flashlight on the ice. Every night he would rise to the light, naked and seemingly at peace, and they would share their gestured greetings, both of them wondering what new changes, if any, the spring might bring.