Features
The Voice
Do Not Go Gentle: My Grandmother’s Rage 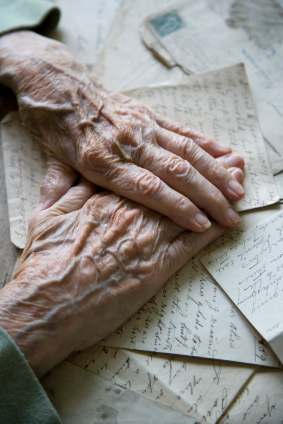 ?What am I to do now?? This has become my grandmother’s refrain.

It was shocking when I saw her again after she had been moved from the Alzheimer’s care centre to the nursing home. My mother had tried to warn me, but I was still unprepared for the vacant eyes, the crooked body, and the guttural repetition of, ?What am I to do now??

At first, we had answers for her. We talked about the weather and about what was happening in our lives. We read her favourite Scottish poems and sang songs to remind her of her youth in Glasgow. We attempted a humorous rendition of ?Happy Birthday? and opened her cards. ?Oh, look at this one from Auntie Dorrie. You remember Dorrie, don’t you??

I thought I saw a glimmer of recognition in her empty eyes before she continued her questioning. With an exasperated sigh, I said, ?Nothing. You’re just going to relax.?

Of course, this disease won’t let her do that. Her failing mind and now her failing body hold her in a constant state of fear and pain.

Apparently, we’re not the only ones bothered by my grandmother’s questions. The nurses keep her door shut most of the time because She’s so loud, shouting her confusion until She’s hoarse with the effort. I want to get angry with them. How dare they treat my grandmother like this? This is my gran, I want to say, the woman who used to make me toast soldiers and hot chocolate, and who always had a comforting word and cuddle to share. This is the quiet woman who spent most of her life in a loveless, abusive marriage and faced it all without question, without ever raising her voice.

This, above all, is a human being. How can you shut her out? How can you leave her to suffer alone? But then I remember my exasperation in the short hour we spent together on her birthday and, despite the lingering indignation and my own feelings of guilt, I understand.

Seeing my grandmother suffering that day and learning about her isolation, I realized that throughout her life, my gran has always suffered alone. It was the way she chose to survive, perhaps something she had learned from her own mother who was also a survivor in a much different way. My great grandmother was sharp-tongued and feisty, raising three children almost entirely on her own after her husband returned crippled from the First World War. Even near the end, when she suffered from dementia and her 92 years of hard living had left her body shrivelled and useless, her spirit was obvious in the way she rolled up her newspapers and tried to swat the male residents at the home.

She was a fighter, and so, in her own way, is my grandmother. Quietly and unassumingly, she fought her way through a life of hardship and pain. Now she is fighting death with a loudness that is startling, as if she has finally found her voice after all these years. She shouts and questions. She makes her presence known.

This new feature of my grandmother, whether brought on by the disease or some long-hidden aspect of her own personality, makes me simultaneously uncomfortable and proud. During the birthday visit, I tried to shush her, to keep her calm and quiet by stroking her hair and hands and reading her favourite poems in a soft and soothing voice. When nurses passed in the hallway and caught my eye, I felt inexplicably embarrassed, as if they were judging me because of this loud and obnoxious woman in their care.

Now that I am away from that place, the nursing home with its clinical smells and surfaces, I am pleased by my grandmother’s behaviour. I want her to fight, to heed Dylan Thomas and ?rage, rage against the dying of the light.? I want her to be heard and to force us all to think about life and death, the important questions.

?What am I to do now?? she asks. Indeed, what are we all to do when faced with mortality in this way?

Perhaps that is why the nurses shut the door and why we all want my grandmother to stay quiet. When confronted with her refrain, we realize there are no conclusive answers. Instead of encouraging her rage against the coming night, we try to hide or soothe it away because we are afraid and we don’t want to face her questioning for ourselves.

Maybe That’s okay. Maybe That’s how we all survive. But the next time I visit, I am determined to let my gran shout, to listen to her questions without fear. I will hear her newfound voice and I will celebrate her fight to ?burn and rave at close of day.?

Do Not Go Gentle: My Grandmother’s Rage