Articles
The Voice
In Conversation With . . . Jeanne (Doucet) Currie

Jeanne (Doucet) Currie is an Acadian recording artist living in Annapolis Royal, Nova Scotia. From July to September 2008 her third CD, Serrons-nous la Main, was one of the top 10 songs on Franco Country, Radio-Canada, Galaxie.

She was one of the artists featured in ?Members News? in the SOCAN French magazine Paroles et Musique and on the French television program VIA TVA.

She received two Music Nova Scotia nominations in 2008 for Serrons-nous la Main: Francophone Artist of the Year and Country/Bluegrass Artist of the Year. Her husband, Wayne, is her manager and also accompanies her on box drum, guitar, bodhrán, and spoons.

In 1999 my husband Wayne and I attended the second World Congress of Acadians in Lafayette, Louisiana. It was really heartwarming, and kind of an eye-opener; there were five or six hundred people and we all felt like relatives because we all shared a past. There were people from Africa, from all over the US, and from Nova Scotia.

When we came back home to Nova Scotia I wrote 50 little poems, mostly about being Acadian. I wrote about my father, my grandfather, and many other things I wanted to share.

In 2003 I published these poems in a little book called Grandir à la Baie. But before releasing this book I decided to turn one poem into a song.

After a friend heard it she said, ?Put away that book and go record that song!?

Then I heard out about a Gala de Chanson. You needed two songs, so I wrote one more and ended up being one of four or five finalists. I said to myself, ?Hey, I can do this!?

I recorded this first song at a local studio and it started getting airplay and did really well. Twenty-two of the poems in my little book were then revamped as songs.

I could not have followed my dream without my Wayne’s support! He had already started to learn to play guitar, so he accompanied me. We started getting asked to play at all these different places. In 2007 we were asked to perform in the Yukon with storytelling and singing because by that time I had enough stories and songs that I could weave them together. I also have songs that go with the stories. Last year we were invited to sing in France!

I am the second of six children from a French-Acadian family, the daughter of Georges and Alexandrine Doucet. My mother was a Thèriault from northern New Brunswick and my father a Doucet from New Edinburgh. 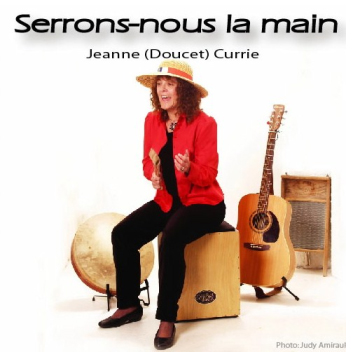 When the deportation started in 1755 it mostly took place in Nova Scotia. Some of them escaped. There were at least one or two boats that the Acadians took charge of; they were able to go to St. John and from there escape to Prince Edward Island. But they were deported from Prince Edward Island a year or two later. My family eventually came back to Clare.

In school we didn’t talk about our Acadian heritage too much but we knew we lived on the Acadian shore so I suppose we knew even then that we were Acadians. The Festival Acadien de Clare started around 1955 and that was when Princess Margaret came to visit.

The ladies made all kinds of Acadian costumes. The costume you see me wear during my performances goes back to the original costume we would have worn?only the cloth would have been different. During the Festival my sisters and I all wore this costume.

Adversity makes you strong. We not only knew we had a place in history, we had great pride in what had been accomplished. It’s the same with the native people?our footsteps have not always been easy. Our ancestors went through a lot of hardships, and for us to keep our language and culture vibrant after everything that happened is really something.

A doctor around here once told me that he thought the French in this area were living a bit longer than the English. I think It’s because there’s that neighbourhood net with the relatives and the friends and all the interactions. The Acadian communities are very close-knit communities, too, like a huge family. Family is very, very important, extended family as well. It all adds up to a feeling of pride.