Columns
The Voice
The Mindful Bard – Rory Block, Blues Walkin’ Like a Man

?Blues Walkin’ Like a Man transcends gender. The blues got so bad that they manifested into human form and began walking down the road beside you . . . so real and so bad you began to converse, and even to take blues by the hand. Now that’s intense?but That’s what Son House is all about.?

Back in our teens my brother and I had a standing argument about the blues, me insisting that it emerged as much from the European folk music tradition as from the African, he maintaining that it was purely an African musical form.

One day I had to ask: ?Then why didn’t they have the blues in Africa before the slave era??

?They did,? he dryly replied. ?It was just underground.?

So why do blues fans generally refuse to grant to white blues players the equality-with-blacks status allowed white jazz musicians?

For one thing, It’s widely known that white players were part of the jazz tradition early enough and had enough contact with the genre’s black founders to make a meaningful contribution to the music. 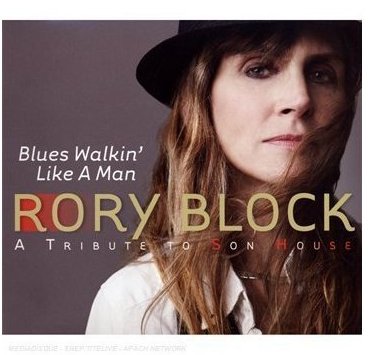 But Delta blues wasn’t played on any grand scale by white musicians until the ?60s, and the white players tended to vacillate between weak, watered-down blues and a ridiculously loud, in-your-face kind of blues that was more a celebration of hard living than an homage to human suffering. It’s little wonder their work was dismissed as inauthentic.

There are some notable exceptions. Just because She’s a female of the paler persuasion, do not make the mistake of assuming that Rory Block’s interpretations are glossy manufactured simulations of Son House’s gritty masterpieces.

We’ve passed, I hope, the time when the recording industry felt the need to create palatable white versions of black geniuses to appease the mass market, and so we can, I hope, let go of the prejudice which dictates that only blacks can play and sing the blues.

Fortunately Rory Block, as a gifted young girl already playing the blues, was in 1965 able to connect with the aging Son House and even to learn under him, putting the lie to any claims that historically or stylistically she was detached from tradition.

Blues Walkin’ Like a Man is like a sweet breeze from nirvana for several reasons. For one, the unplugged Delta blues tradition is often underrepresented among new blues recordings, maybe because this branch of the blues is less formulaic, more difficult, more emotionally and technically taxing than the more danceable urban blues inspired by the Chicago players in the ?40s and ?50s.

For guitarists this album is a master class in blues riffs and techniques. Rory and her producers were faithful to the original arrangements but were so in touch with the spirit of this music that they added only what would enhance it and zealously avoided burying the purity of the sound under superfluous instrument tracks.

Another reason why recordings like this are such a treat is that It’s utterly refreshing to hear this music in a clean modern recording, devoid of the buzzes and muffling, cherished as they may become through frequent listening, of House’s original records.

I’ve heard Rory sing off and on over the years and have always felt a pleasant shock at her powerful delivery. Her voice lacks tenderness and nuance but this is common to the blues, which is better at channelling anger, hopelessness, and desolation than wistful heartache or homesickness. She sounds like Bessie Smith at times, but really there is no one she sounds quite like and no one who sounds quite like her.

Blues Walkin’ Like a Man manifests seven of The Mindful Bard’s criteria for music well worth a listen: 1) it is authentic, original, and delightful; 2) it confronts, rebukes, and mocks existing injustices; 3) it makes me want to be a better artist; 4) it gives me tools which help me be a better artist; 5) it displays an engagement with and compassionate response to suffering; 6) it inspires an awareness of the sanctity of creation; 7) it provides respite from a sick and cruel world, a respite enabling me to renew myself for a return to mindful artistic endeavour.