Articles
The Voice
In Conversation With . . . Patrice Boulianne of Blou

Patrice Boulianne, a.k.a. Blou, fronts a band of the same name in Meteghan, Nova Scotia. Blou has forged a new style of Acadian music dubbed Acadico, a blend of Cajun, Acadian, and zydeco, and has won numerous awards at home and internationally. Originally from St. Boniface, Manitoba, Boulianne moved to Moncton, New Brunswick in 1982 and married an Acadienne?the rest is east coast music history.

The biggest difficulty, for me, in pursuing a musical career while based in Nova Scotia, is the cost of transportation. I live between Digby and Yarmouth, in the Municipality of Clare, and It’s a three-hour drive to the Halifax International Airport. But That’s the only problem that bothers me; with all the different technology now It’s relatively simple to communicate with anybody around the world.

I was very busy last year with two recording projects and a couple of tours in Québec. I was the musical producer for an album tribute to the Acadian singer-songwriter Ronald Bourgeois. Nineteen artists from across Canada lent their voices to renditions of Ron’s songs. Mary Jane Lamond, Lennie Gallant, and Mathieu D?Astous gave us especially beautiful interpretations. The album has been nominated for the 2009 East Coast Music Awards for Francophone Recording of the Year.

I also recorded my first Christmas album last year. I was in Christmas mode for nearly two years, preparing the arrangements and getting it all in place with my manager. I toured mostly in Québec this year, working on opening the market.

I played during the summer and did a lot of promoting and performing during the holiday season for the Christmas album. Three of the songs got a lot of airplay on Québec radio, which was amazing. While driving to an interview for the local newspaper in Trois-Rivières I was listening to a very popular Québec radio station and I heard one of my Christmas songs. I was beside myself! I’d heard my songs on the radio before but for some reason to hear my Christmas song was special.

I can’t say that 2008 was a typical year. I did more recording than usual but fewer shows. This was mostly due to government cutbacks, which have really slowed the promotion and export of Canadian music and culture. I was supposed to go to Europe and China, but transportation funding wasn’t awarded.

We lack venues to promote our French music and to give a chance to our future Acadian singer-songwriters. It’s sad that the Acadian School Board does not have a music program in their schools to give our young talents an opportunity to explore and discover. It’s sad to see certain local bars in the Acadian regions just giving in to what is easy and not developing an Acadian night once a month to encourage pride in our musical heritage, but it comes down to dollars for most of these establishments.

What I would really like to see in every community in Nova Scotia, be it in the restaurants or the local pubs, is monthly, bi-weekly, or weekly music circles, just like they have in Chéticamp, where local talent comes in and jams, where if you sing rock and roll you sing your rock song, if you play the Scottish fiddle you play your strathspey, etc. Let the community enjoy homegrown music.

That’s what brought me into this beautiful mess?I wanted to share my homegrown ideas. I knew that there would be people who wouldn’t like what I did, but I did it for those who would like it.

There will always be ups and downs, thank God; otherwise life would be terribly boring. 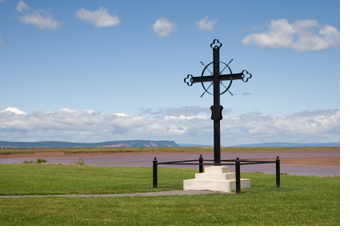