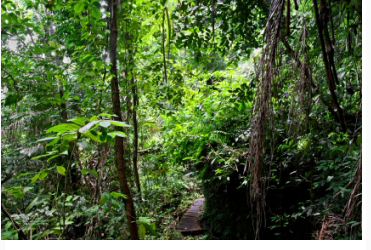 Based on journal entries, this article recounts some of the author’s adventures during the three months he spent living in the jungle and acting as a guide for foreign tourists, struggling to clear paths through dense bamboo groves while learning more about himself and his surroundings.

I woke up at 4:00 a.m. and strapped on the new sandals that I’d bought at Bata Shoe for 80 Ringgit Malaysia ($35 CDN at an exchange of $1 to 2.30rm) then organized a small pack for the trip to base camp, leaving my other things in the village.

Boarding the ?Jungle Railway,? I was expecting a train out of Schindler’s List or something, but got a rather comfortable train with air conditioning. So much for mystique!

The train ride cost 4.30rm and we expected to arrive in Dabong at 8:55 that morning, three and a half hours after our departure from Wakaf Bharu. The sky was still dark and I hoped that I could get some good photos before it was time to get off.

I sat across from a Muslim man who had been praying for the last half hour, turning in his seat in prayer position gazing out toward God, then crossing the aisle to repeat his prayer on the other side. With the most compassionate and eerily entrancing singing voice of prayer that gave chills as I listened, the man sat before me entirely full of faith.

In Penang, I visited a remote Buddhist temple where only locals were present (and few at that). Standing amongst a vast array of plaques, statues, and tributes, I was witness to one of the few temples attached to a monastery where, clothed in Buddhist cloth, the locals prepare the afternoon meal.

One man sitting in the full lotus on a nearby bench could be heard clacking away with some sort of instrument held in his right hand. Sitting down to examine the instrument, I saw that it resembled wooden spoons. Sitting there for the next 20 minutes or so, he began drumming a beat?his right hand holding the spoons, his left keeping time on his lap as he sang hymns with an air of discipline and focus.

Within five minutes, feeling as though I was part of the music, I began to go into a trance and my eyes began to water. I felt both suffering and joy in the voice of his prayers. It is truly amazing how, even with language barriers, an emotional heartfelt voice can be understood.

At last, I made it! Jelawung Jungle. I caught the jungle train at 5:15 a.m. and arrived in Dabong four hours later. As I walked around town, the local children hoarded into large packs for protection from the unusual human presence while a crescendo of ?Hello!? boomed from the pack. With my response, their faces beamed with delight.

The children continued their language assault of basic English phrases, such as ?Where are you from?? ?What’s your name?? ?How are you?? Answering seemed futile over the chorus of giggles and the astonishment of the group when I responded. The older people looked on as though I was an alien that had just landed to abduct their children for experiment.

Eventually, a local boy of maybe 17 gave me a ride on his motorbike to the boat that would connect me to Jelawung. Arriving at the ?boat? (constructed of a hollowed-out log and a small outboard motor), we watched the boat driver as he went full throttle against the current upstream then coasted back down, completing a massive arch the length of a football field in order to go from one side to the other (1rm for the boat crossing).

When I got to the other side I immediately saw a monkey, the first wild one I had ever seen!

I was offered a taxi ride to the village some 10 kilometres away but said that I would walk. Within a few kilometres, another boy stopped with his motorbike and drove me directly to my starting point for the ascent to 1,500 feet and ?Baha’s Base Camp.?

The walk (climb) was at times exhausting, especially while I was unsure of exactly where I was going. Prior to my departure a tour guide friend had drawn me a pencil map that resembled the old treasure maps I saw in Indian Jones?and just as you’d expect, X marked the base camp.

As an aside, the butterflies in this particular jungle were absolutely mesmerizing and I could often be seen lying within my hammock watching them fluttering through the mist of the waterfall that was the backdrop of my cabin. Some of the butterflies were largely black, dotted with brown on top and light green and blue on either side of the bottom. Wow!

With a good idea of where the path was, an hour of trekking passed by, leaving me to wonder if I had lost the path and would be left out in the jungle to be found days later by a search party (funny what the mind does). Within minutes the fear of being left out in the jungle alone was eclipsed by the sound of a waterfall. Thinking that I had walked a circle back to the start of the falls, I halted and contemplated turning around, but continuing the ascent gave rise to a blue tarp seen through thickets of bamboo and when I got closer the sign said ?Baha’s Camp.? I had made it!

As I entered the camp I heard ?Hello, Brian. Welcome!? and seated in their makeshift kitchen were some local friends from the city that had gone up to visit Baha.

The place was stunning. My friends fixed me a cup of coffee and after a brief introduction to Baha I was given the most amazing tiny bamboo hut that was built on the edge of the pool that gathered an immense amount of water falling from above; the mist from it would drape my cabin in dew for the next three months.

From my 10rm bungalow and my hammock I would lay listening to the sounds of the jungle, with the highest waterfall in South East Asia literally at my feet. Up there on the first of three large tiers that make up this waterfall, I wondered how to put into words what life had become before my very eyes. It would take some time to put into words the next three months, but upon my initial arrival all that came to mind was stunning, simple, sound, silence, and solitude!