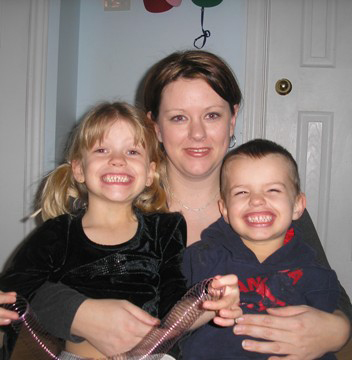 Heather Mallard, a second-year student in AU’s Bachelor of Arts in Psychology program, is doing both.

?It is going better than I could have ever expected,” Heather says of her dual-schooling lifestyle. ?AU has been a great complement. If I had to go to school in town it would be a lot harder.?

Having a supportive family has been key. ?My husband is awesome!? says Heather. He works shift work, and when he starts work in the early evening, ?I have all morning and again on the weekends to work on school,? Heather says. ?He teaches the kids when he is on afternoons, which they absolutely love, and I teach them when he is on days.?

Although teaching both self and kids might sound challenging, Heather doesn’t get burned out easily. For her, the secret to success is her desire to learn.

?I really enjoy it,? Heather says. ?I have been saying for the last year that I thrive so much on learning it is unbelievable!? It helps that now, for the first time, She’s become enthusiastic about learning. ?I . . . [was] a child who never liked school, but I think it was because of the environment I was in,? Heather says. Now, It’s different: ?I am constantly trying to learn and expand my understanding of the world around us,? she says.

It’s a love She’s keen to pass on to her kids, aged six and three. In addition to using a set curriculum to home-school them, she and her husband try to provide a hands-on experience to enhance learning. For example, she says, ?shopping can teach math, organization, budgeting, and socializing.?

They also make a point of investigating the outdoors??We try [to] spend a lot of time in nature,? she says?and have the kids enroled in music and karate.

Heather and her husband began home-schooling their daughter midway through her junior kindergarten year, after bullying by other students made her attending school impossible.

Although in the following year there were no similar problems in the classroom, home-schooling was still the right choice for the family. ?We . . . knew we needed to home-school her,? Heather says. Now in first grade, their daughter is ?excelling,? she says. ?She embraces life with open arms . . . she doesn’t have these ongoing fears anymore.?

While deciding to continue home-schooling her daughter, Heather began to consider returning to school herself.

?I . . . never got an education, but always knew I could do more,? she says. Initially, she had planned to major in psychology, but it wasn’t the best fit. ?I really enjoyed it to a point . . . but there seem[ed] to be something lacking,? she says. ?There needs to be definite meaning in what I am learning and doing.?

She’s considering switching her major to anthropology, something She’s begun studying recently and has found fascinating. ?There is something about learning of different cultures in our world . . . and how we have evolved,? she says. ?It is really . . . quite intriguing.? 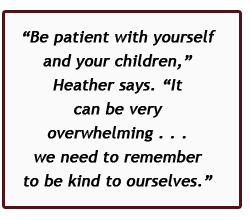 for Heather. ?I can manage my life around my school work,? she says. ?My kids don’t have to go to daycare, and we can sometimes work on our school work together!?

She also likes being able to go at her own pace within the course contract dates. Every week she sets goals, but She’s flexible about when and how to reach them. ?I know each week what I need to accomplish,? she says. ?If something comes up . . . I can be flexible, as long as I get it done that week.?

As an added benefit, She’s able to model lifelong learning to her children. ?When I was talking about going back to school, they didn’t quite understand, because I am mommy,? she says. Now, ?they can see me [studying] all the time . . . [it] shows them that age is never a restriction on life.?

Sometimes, procrastination can be a stumbling block. ?I think it is a part of being human,? Heather says. But She’s seen the results of both steady work and last-minute scrambling, and it gives her the added boost she needs to stick with her studies.

?I . . . learned my lesson last semester,? she says. ?I did not manage [the] classes?I just flew by the seat of my pants and I paid for it in the end.? The last week of courses was a nightmare: ?I had to study for four exams, do two research proposals, two term papers, and I still had a couple of chapters and quizzes to do . . . ouch!? she says. ?I learned my lesson!?

Studying while raising kids brings its own set of challenges and, of course, distractions. ?Be patient with yourself and your children,? Heather says. ?It can be very overwhelming . . . we need to remember to be kind to ourselves.? For her, staying organized and setting up a routine is essential to staying on track. For example, ?they know mommy does school when daddy is home during the day,? Heather says.

As for those inevitable interruptions?a regular occurrence, particularly with her three-year-old?she recommends staying consistent. ?I remind him that he needs to have his quiet time right now, and I will be able to play and talk after my school work is done,? Heather says.

One trick she uses to avoid interruption during study time is to make sure her kids are occupied ahead of time. ?When my son is interrupting a lot, it is because he is not engaged enough himself,? Heather says. ?Find[ing] good, independent activities . . . is probably [the] best first step.?

?It doesn’t take a super-person to take on home-schooling, or distance ed for yourself, or even . . . both of them at the same time,? Heather says. The secret, she believes, is ?dedication and patience.?

?You can do anything you put your mind to,? she adds. ?You just need to follow your heart!?