Articles
The Voice
In Conversation With . . . Jeff Bryant of The Human Statues

The Power of Standing Around Doing Nothing

Jeff Bryant is half of The Human Statues (the other half being Zachary Stevenson), a British Columbia folk duo as notorious for their static performance art as for their retro-style folk songs sung in tight, crystal harmonies. Their expressed mission is ?spreading jubilation across the nation,? and their debut CD was recently reviewed by The Voice here. The Human Statues are now based in Toronto.

The Sculpting of The Human Statues

I’d been aware of busking in Victoria, having grown up there, and I’d dabbled in musical busking, so when I met Zack I thought he and I would make a good musical duo and could do that as a summer job.

The first time we went down to the Inner Harbour to visualize and discuss playing music we saw a human statue performer. We started thinking about doing that ourselves and we got so excited about it that when we were walking up Government Street we decided to see if we could hold a freeze.

There was this huge fake stuffed bear outside of a gift shop so I suggested we stand next to it as still as possible. As people walked by they kept stopping, thinking they were getting in the way of a photo shoot. They would look for a camera across the street and then look back at us. They could see we were real people and couldn’t imagine why anyone would do this unless they were insane, so they would walk away with trepidation. That experience was hilarious and fun and planted the seed for what we’re doing now.

We came up with our name sort of by default. I think most people are pretty insecure about their band names. When we first got asked what our band name was we’d be like, ?Uh? um? The Human Statues?? But we’ve forged an identity with it and have heard people using it so now we’re completely comfortable with that name.

When we started out we posed as human statues to make money, but now we do it just to promote our brand. It’s always a surprise to our audiences; every time I perform I get to see all these fresh faces that are like, ?What the hell?!? 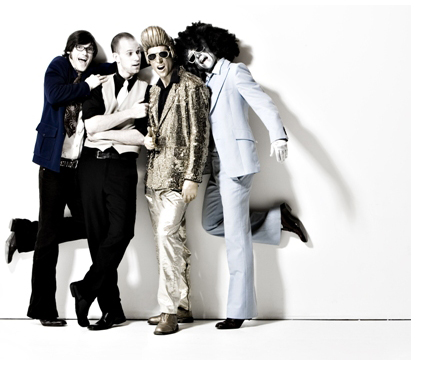 The Power of Nothing

There’s no better promotion than us standing there in our statue costumes just doing nothing, which seems so ironic to a musician. It’s really effective in generating brand new fans from scratch, which is a very hard thing for any young band to do.

Zack and I are both analytical guys. I went to school for arts management, so It’s part of my character to be very cerebral and pragmatic, but I’m also an artist. Zack also has both of these aspects to his character. We wouldn’t be doing this if we couldn’t figure out ways to share it with people.

we’re not guided by some adolescent fantasy about fame and wealth but we are definitely motivated by the prospect of creating a life for ourselves. Getting by doing things that are relevant to us is a huge dream, because It’s hard enough to find something you can be passionate about, let alone to find some way to pay the bills doing it. The motivating factor for us is jubilation.

In my teens I had a friend named Billy Reid who I know was a huge influence on the way I think today. You can find out more about him at www.verytasteful.com. He was a big influence on everybody. We did a lot of theatre together in high school in Victoria. He was very popular because he was a very engaging person. Usually that kind of power at that age is abused but he was so confident at such an early age that he didn’t subscribe to any of that. He treated everyone with respect.

At parties, picking up a guitar was always about having fun. Our concept of ?jubilation? started with him. What I’m trying to do is to propagate his sense of joyful inclusion.

I’m very interested in collaborating with people who are good at what they do, but this is less important than their character and intention.

If I trade off our values for a quick fix and work with people who are not sound in their intentions then It’s only a matter of time before everything disintegrates. So we try to take the time to make sure all our relationships are sincere ones. It’s the same with my personal life; if I want to make my life easier I just have to make sure the people around me are the right people.

I’m excited. I believe that the ?60s were a warm-up. It’s now incumbent on all of us to borrow lessons from that era. Right now there is a growing recognition that our planet is in peril. Not to make some contribution while You’re on it is a missed opportunity. Obama is suggesting that now we have an opportunity to work very hard to make things better. I think we might be on the verge of a new era of the arts and of art contributing to social movements.

The Mindful Bard – The Human Statues