When health problems made traditional university no longer possible for her, Angelica Nancekievill transferred to Athabasca University’s Bachelor of Arts in English program. The London, Ontario-based student, who’s studying English literature, explains why she chose AU for distance education.

She also describes some of the challenges of distance study as compared with traditional unversity, but gives her secrets to staying motivated and on track nonetheless.

Angelica switched from the University of Western Ontario to AU in 2007, when health issues forced her to consider a change of plans. She was initially attracted to AU because of its reputation.

As she began the four-year program with AU, she was impressed by the flexibility distance education offered.

She also enjoys the flexibility of program planning. ?You get to take other courses . . . after first year this would not have . . . been the case at the other university I was at,? she explains. ?I have many other interests, like history, political science, and art, so this has worked out perfectly.?

Class scheduling is another area in which flexibility has been a plus, as She’s able to plan her four concurrent courses in a way that works well with her study techniques. Although she schedules her exams to coincide around the same time??I prefer writing them all at once, and getting them over with in one sweep,? she says?she doesn’t start another set right away.

Instead, she enrols in two courses, and adds the next two a little later. It keeps her from getting too burned out. ?I want . . . to ease back into courses slowly . . . instead of picking up four new ones at once,? she says. ?This method works best for me.?

Self-motivation can be a challenge, however. ?I do work best independently,? Angelica says, but she misses the classroom aspect of traditional university.

?I really miss the in-class discussions, especially with my English courses,? she says. She’s hoping that some of her classes will begin offering online discussion opportunities. Also ideal would be a substitute for the ?traditional? ability to speak with a professor in person.

Angelica says she finds it difficult to stay motivated if she isn’t getting enough support from tutors. ?The [lack of] face to face . . . removes the accountability,? she points out. ?This causes me to lag a bit . . . I can really get discouraged.?

To stay motivated and on track, Angelica uses several techniques. First, She’s found that long-term planning is essential. ?I am a very methodical, slow worker, so I need . . . a solid schedule,? she says. ?Otherwise, it would take me somewhere between 10 and 100 years to do one course!? 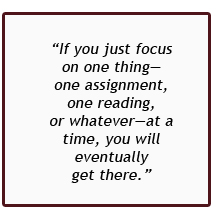 She also uses her long-term goals as a source of motivation: She’s hoping to someday obtain a master’s degree in English literature, and then a doctorate. ?I would like to teach and write, both academically and otherwise,? she says.

And though it may be a ?long road ahead,? she says, She’s working at it, step by step. ?I am really grateful to Athabasca,? Angelica says.

Along with long-range thinking, focusing on the small stuff is equally important. ?I think the best piece of advice I was ever given . . . would be [to] take baby steps and do not get stressed out by the big picture,? Angelica says. ?If you just focus on one thing?one assignment, one reading, or whatever?at a time, you will eventually get there.?

And when you go off track, It’s important, she feels, to stay positive, get back on target, and not dwell on past mistakes.

?don’t let a bad mark affect your future work,? she advises. ?If you take a bad mark and learn from it, you will keep getting better and better.?