A visit to New Orleans during Mardi Gras

What’s it like in New Orleans during Mardi Gras season? I decided to take a trip down there to find out!

It might come as a surprise that these festivities, known for their excesses, actually have religious roots. The celebration of Mardi Gras is intimately connected with New Orleans? French Catholic heritage.

Mardi Gras, sometimes referred to as Carnival, is the day before Ash Wednesday, which begins the Catholic season of Lent.

This seven-week period was traditionally a time of fasting and penance, and even today Catholics keep to tradition by ?giving up something for Lent.? Because parties and dances were traditionally frowned upon between Ash Wednesday and Easter, Mardi Gras was seen as the last opportunity to party until Lent is over. It certainly wasn’t a time for moderation!

The modern celebration of Mardi Gras is more than a one-day event restricted to a small section of the city, however. It’s a whole season, one long state-wide party that goes on for several weeks.

Traditionally, the Mardi Gras season begins on January 6 and lasts until Mardi Gras day, ?Fat Tuesday,? the day before Ash Wednesday. During that time, It’s round after round of parties and balls, and people decorate their houses and businesses with streamers, lights, and wreaths in the traditional Mardi Gras colours: purple, green, and gold.

The festivities can even rival Christmas, right down to the Mardi Gras trees! Although New Orleans is more famous for its Mardi Gras celebration, the season is celebrated in the same way?on a smaller scale?in both cities and small communities across Louisiana. 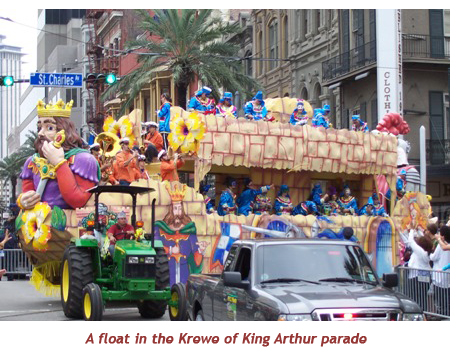 The highlight of any Carnival festivities is the parade, and nowhere can this be better seen than in New Orleans. There, parade season begins 12 days before Mardi Gras day. In New Orleans and its neighbouring parishes (the Louisiana equivalent of a county), more than 70 parades roll through the streets in the weeks prior to the big day, and still more occur in other parts of the state.

But who puts on these entertaining and sometimes fantastic shows? We can thank the Krewes, social organizations made up of private citizens.

Traditionally, Krewe membership was exclusive and often kept secret. Most Krewes are now open to anyone who can pay the club dues, which range from $20 to several thousand dollars, depending on the Krewe’s activities. Although some Krewes are involved in charity work, the primary purpose of most is social, especially during Mardi Gras season. There are balls, and occasionally fundraisers, but the culmination of a Krewe’s activities is its Mardi Gras parade.

Each Krewe hosts its own parade, providing its own floats (either created by members or rented), beads and trinkets for throwing to paradegoers, and costumes.

The number and complexity of the floats depends on the size of the Krewe, and the annual theme varies with each Krewe, although popular culture usually figures prominently. Marching bands from local schools round out the parades. 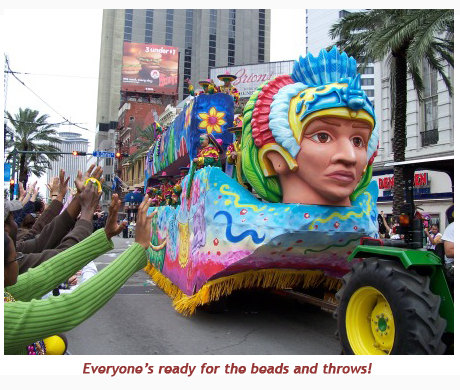 During parade season in New Orleans, thousands of residents and tourists line up along the parade route to wait as long as several hours for the parade to roll through. The party atmosphere is high: almost everyone wears beads, some wear masks, and a few are even in full costume. There’s lots of eating, and, particularly in the evening, drinking. Once the beginning of the parade rounds the corner, the crowd erupts into cheers. That’s quickly followed by cries of ?Throw me something, Mister!? as everyone crowds the barriers to try to catch beads and other throws from the floats.

Tossing strings of purple, gold, and green beads has become one of the most well-known aspects of Mardi Gras in New Orleans, but bead throws weren’t always a part of the parades. In the 1920’s?after nearly 100 years of Mardi Gras parades in the region?the Krewe of Rex first tossed glass bead necklaces during their parade, and It’s been a tradition ever since.

And beads are only one of many items paradegoers can catch. Although most of the throws are bead necklaces (now plastic!), Krewes also include other items, such as toys, trinkets, or medallions with the Krewe logo and year.

Everyone wants to catch beads, but It’s these rarer ?prizes,? as they’re called, that are really sought after (and in some cases, fought after). The Krewe-specific items are particularly coveted. Probably the best prize we ended up with was a plastic sword and sheath thrown during the Krewe of King Arthur parade and caught one-handed by my husband?truly an Excalibur moment! 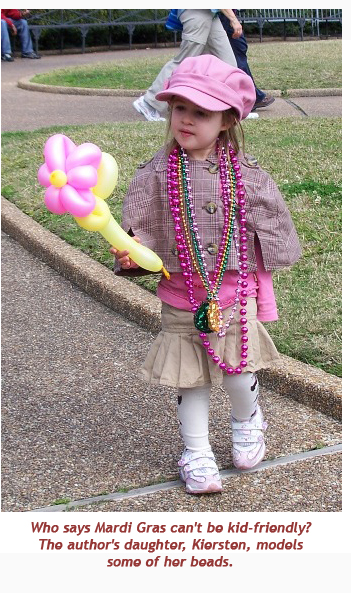 Of course, the bead throwing is usually associated with rowdy or bawdy behaviour, but That’s exaggerated as far as many of the parades go. Although there’s definitely competition over the prizes and special throws, I never saw any sort of fighting or flashing. (I will not comment on whether or not I held up my cute daughter on one or several occasions in the hopes of scoring a prize.)

I’ve heard that some of the nighttime parades can get a little more adult?particularly with all the cheap liquor available on the street corners?but the ones we saw were completely family friendly. The parades are a happy event, and there are enough throws that everyone leaves with something.

Mardi Gras festivities have been so integrated into the life of the city that normal operations and parades have found a way to work together. Whole streets?including trolleys?are closed down for the duration of the parades, and businesses in the parade districts tend to close early (or stay closed all day) on parade days. And Mardi Gras day itself is a city-wide holiday!

On the other hand, once the parade passes through, things go back to normal very quickly. We were amazed at how fast the police department moved the barriers, had the sweepers go through to remove broken beads and garbage from the street, and rerouted traffic.

A short time later, the only remains of the parade were the strings of beads around revellers? necks?and the memories they’ll carry with them. 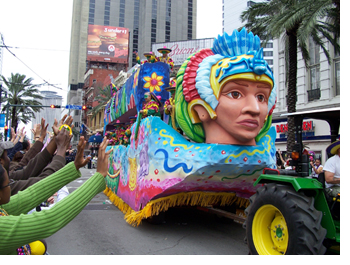