The Pursuit of Happiness as Highway to Hell

?There are four universal healings in every culture, and That’s singing, dancing, storytelling, and silence.?

Harry joins Mark, who is having a cigarette on the balcony of a classy rehab facility in the Arizona desert. Mark’s wife and his mistress, both staying at this facility (allegedly to help him with his recovery) have been fighting over him like dogs in heat.

But then he speculates that perhaps Mark is not really loved by both women. Harry goes on to say that you don’t really have a choice about who you love.

This is one of many instances in which Mark, who has chosen his Barbie doll mistress over his hot-blooded wife, bristles at the intrusion of reality and retreats into his own rancour; he insults Harry, then carelessly drops his burning cigarette into the sage brush. 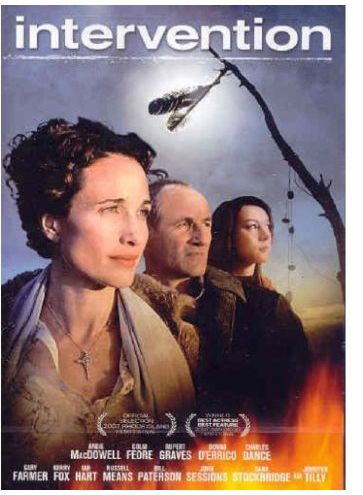 The characters in Intervention have a tendency to smoke when threatened with undesirable knowledge. This minor addiction (minor compared to alcohol and crack) turns out to be the harbinger of the final conflagration during which the characters are all forced to gaze on the fruits of their own depravity.

The Native American characters are largely in the background, but their significance flashes out like lightning. Seemingly sprouted up from the desert landscape itself, they’re steady and serene while the whites, even the therapists, are all unbalanced, unaligned, and wobbling precariously in everything they attempt while looking absolutely farcical in their attempts to justify themselves.

This Native American theme is supported by motifs: eagle feathers hanging from a tree, a sweat lodge, teepees; there is even the statue of an Indian chief holding court over the marriages fragmenting in the lounge.

The primordial wisdom of the Native American characters is in marked contrast to the contrived compassion and erratic psychobabble of Bill and Kelly, the two married therapists. It’s hard to listen to them gleefully holding forth on ?I language and you language? without being sickeningly reminded of how deeply the psychological professions fail us.

In one heated exchange, Bill and Kelly both misinterpret their clients? weaknesses by transferring onto them the weaknesses in their own relationship. Bob, the Native therapist, asks them, ?Excuse me, I have to ask? who are you two talking about here?? In another contentious session between Bill and Kelly, Bob brings out his harmonica and begins playing a blues riff.

The acting in this film was improvised within a narrative structure, and the results are spectacular. Improvisation ensured that the actors? individual experiences informed their characters in ways that couldn’t be dictated (hence limited) by the director.

In Christian mythology natural depravity carries within it the seeds of death. In Intervention too it is hard to separate death and depravity; both dance though the story like nimble partners while the patients jump through hoops to avoid watching.

The characters also avoid dealing with human profundity, which was made gloriously manifest in Jennifer Tilly’s performance as Jane, Mark’s estranged wife. Looking into her profound love for Mark and her intense rage at his behaviour is like looking into a bottomless well in which love and hatred are swirling downward into a blur. Such things can’t be explained, only witnessed.

The 12-step process is historically and ideologically rooted in Christ’s teachings about humility, grace, repentance, and forgiveness. As a continuation of this director’s enchanting tendency to embed meaning in casual details, we see a telephone pole on a hill, framed to look like a crucifix.

But narrow is the gate and few are those who enter in. In the end, is love our crucifixion?

Intervention manifests seven of The Mindful Bard’s criteria for movies well worth watching: 1) it is authentic, original, and delightful; 2) it gives me tools enabling me to respond with compassion and efficacy to the suffering around me; 3) it displays an engagement with and compassionate response to suffering; 4) it inspires an awareness of the sanctity of creation; 5) it is about attainment of the true self; 6) it stimulates my mind; and 7) it poses and admirably responds to questions which have a direct bearing on my view of existence.