Articles
The Voice
In Conversation With . . . Andy Flinn of T@b

They’ve also made a name for themselves as music promoters, offering local musicians a venue in Night Kitchen, their weekly variety show in Wolfville, and the AMP (Acoustic Music Producers) festival.

You can read the Voice review of their new live CD, New Teeth on Stage, in this issue. The following are notes from a conversation between T@b member Andy Flinn and Wanda Waterman St. Louis.

Part I: From Shoe-Gazing to Acts of Love

I had a recording studio in Toronto and I was doing a recording project with some former bandmates. I asked Ariana to play saxophone on it. Right after that we started a project called Tic-Tac, which was like T@b music only instrumental.

We toured with that all across the country, in bookstores like Chapters and Indigo. There were people peeping out from behind the bookshelves going, ?What in the h? is that??

We were very slow learners in playing music that people might like. we’re still learning. Good music doesn’t necessarily mean popular music or music you can live off. But we’ve come a long way since playing polymetric instrumental music in 13/4 and 7/4 time?at the same time?for unsuspecting library and bookstore dwellers.

I Write the Songs

I’m sort of the primary writer and for our songs to make it out of our house Ariana has to say, ?Yeah, I might sing that.? So there’s an automatic review. I’ve tried making her sing stuff that she didn’t like to sing and it didn’t work.

She can sing anything but the message in the song has to be worth her while. For the most part we think ?If it ain’t good don’t say it.?

We are constantly negotiating what we’re going to play. It’s the consensus-building thing; the larger the group, the more difficult it is to build consensus. Two is the easiest number within which to reach consensus, other than with yourself. 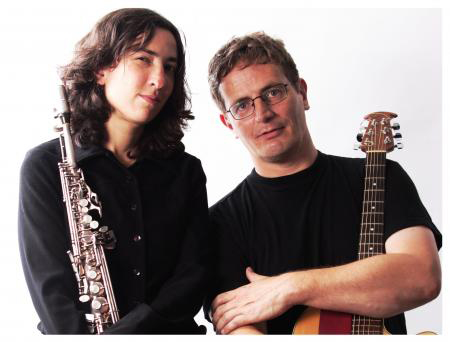 I played garage rock first. I was forced to take piano lessons for half a year. That didn’t pan out because I’d come back and play the piece pretending to read the music but I was playing in the wrong key and it became obvious to the teacher.

My piano teacher ended up taking me to all these old cathedrals around where I grew up. We would go play the church organs and stick our fingers in the pipes and see if we could make them do overtones. That teacher was probably one of my bigger musical influences. He played baroque music, and that kind of polyphonic and multi-threaded music. That’s partly where my polymetric obsession comes from.

Ariana comes from an altogether musical family. Her sisters, Sara and Kamila, are a folk duo. Their mom’s a music teacher. Ariana had lessons on the violin and a few lessons on clarinet and saxophone, but she obviously ran away screaming and did her own thing.

For both of us, performing has not come easily. We were the classic shoe-gazers; we would play a really complicated song and stare up from our shoes only to mumble something incomprehensible to the shoes in the audience then return our eyes to our own shoe tips and continue with our show.

I remember once we were driving with Ariana’s mom. We had just finished a show with Sara and Kamila in Toronto and were heading for Montreal. We asked, ?Why did they sell eight CDs and we only sell one? Why do they love them more than they love us?? We got a lecture, of course.

An Act of Love

we’re still working on our performances, to tell you the truth. We even took an acting improv class. There are so many details; it has to do with the clothing you wear, etc., making an effort. All of these things matter because we’re asking people to be quiet while we play and to give us money, and when they come to a show they actually want the show to be good.

I think one of your responsibilities is to give them what they hope for. Some people may think that this sounds commercial, but it is in a sense an act of love.