Articles
The Voice
On Film – Valkyrie

Tom Cruise’s latest film, Valkyrie, set during the Second World War, seems to have made its retreat from the theatres. Nevertheless, it is a very interesting movie, not only for the story on the screen, but also for the controversy that surrounded its production.

A portrayal of historical events and a nail-biting thriller, the story itself is extremely dramatic and compelling. The 20th of July, 1944 attempt on Hitler’s life was organized and carried out by members of the German military. Colonel Count Claus Schenk von Stauffenberg, who had been maimed in an attack by a low-flying fighter plane in North Africa, carried a bomb into the conference hut in Hitler’s ?Wolf’s Lair? Headquarters in East Prussia.

After the bomb exploded, and they believed that Hitler was dead, the conspirators initiated a coup in which the top Nazis and the SS were to be arrested and the war brought to an end.

Within a matter of hours, however, it became clear that Hitler had survived. The plan unravelled, hampered by hesitation and uncertainty, only to be shattered by the unquestioning loyalty of Hitler’s supporters. The conspirators were ruthlessly rounded up and executed.

Tom Cruise, as Stauffenberg, plays the central character in the plot to kill Hitler. Valkyrie?s relatively large cast of conspirators is introduced quickly, generally as Cruise’s character recruits them for the resistance movement. We hardly get to know their names, and little else about them. Regrettably, most of these characters remain underdeveloped.

We do, however, realize the risk taken by each of the conspirators, and see them shot, tried, hanged, or committing suicide in the aftermath of the attempt to assassinate Hitler. Unfortunately, Valkyrie makes it appear that only a handful of brave people lost their lives. This is completely misleading. As the Third Reich continued to implode, and the Fuehrer’s wrath spun out of control, a climate of paranoia and a thirst for revenge prevailed.

Five thousand individuals were executed as a result of the July 20 plot against Hitler. By then, the Nazis had stopped reporting the executions in the press, not wanting ordinary Germans to realize how much support there had been behind the bomb plot. It is a tragic oversight that the film tells us nothing about the scope of the conspiracy and its consequences.

Many of the scenes in Valkyrie were filmed on location in Berlin. The Bendler Block’s Offices of the Army High Command is now a museum devoted to the resistance movement. These are the offices in the film where some of the conspirators work as senior military personnel, and later issue orders during the attempted coup. In the courtyard of the same building is the site where Stauffenberg and co-conspirators Werner von Haeften, Friedrich Olbricht, and Albrecht Ritter Mertz von Quirnheim were executed in front of a firing squad. The use of the Bendler Block, so closely associated with the July 20 plot, gives greater poignancy to the film.

Shooting a film in Germany with lead actor and United Artists? producer Tom Cruise, however, was risky business. On this side of the Atlantic, we are likely to think of Cruise’s couch-jumping, medical advice-dispensing, and supposed Katie-controlling antics as ridiculous celebrity tabloid material, but German officials view Cruise’s religion, the Church of Scientology, as a dangerous cult. Accused of employing cult-like practices to financially exploit its members, the group is under observation by that country’s security service.

A series of articles by Andrew Purvis in Time magazine has covered Germany’s ongoing efforts against Scientology, a religion based on the writings of science fiction author L. Ron Hubbard. Time reported that in a 1995 judicial ruling, the Church of Scientology lost its recognition as a religious organization in Germany, with the judge concluding that the group was ?masquerading as a religion in order to make a profit.?

Furthermore, a report from interior ministers of the German states had claimed that ?the Scientology organization, agenda and activities are marked by objectives that are fundamentally and permanently directed at abolishing the free democratic basic order . . .? Moreover, in 2004, a Cologne judge ruled that Scientology threatens the legal rights of its members, and among other practices even ?brainwashes? them.

Wikipedia, the online encyclopaedia, also documents Germany’s opposition to the group, including information that lawyers, representing the German Federal Office for the Protection of the Constitution, allege ?that Hubbard had written that civil rights . . . should be restricted to Scientologists.? 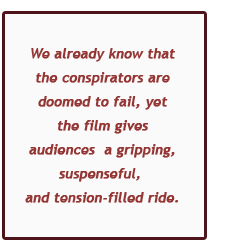 It is not only the German authorities, however, that have a problem with Scientology. It has even been reported that Stauffenberg’s son, Berthold, considers the religion to be a ?totalitarian ideology.?

In response, Scientologists counter that 10 years of intense scrutiny by the German government had not found any evidence of anti-constitutional activities or illegal practices. Furthermore, a recent attempt by German authorities to have the organization banned merely ended in failure.

Given this background, the actual making of the film provided as much intrigue as the conspirators on the screen. Many Germans were outraged to learn that Cruise, so highly visible in a suspect organization, planned to use the historic Bendler Block memorial and portray Stauffenberg, an almost sacred German resistance figure.

?Tom Cruise is not just Tom Cruise, but a figurehead of an anti-constitutional organization, and he should be treated that way,? Ursula Caberta, the head of the Scientology Task Force of the Hamburg Interior Authority, was quoted as saying in a Time article.

Britain’s The Guardian suggested that some Germans actually equate Cruise’s role within the Church of Scientology with that of Nazi propaganda minister Josef Goebbels. ?If a man aggressively representing this sect [Scientology] plays one of our national heroes this is naturally going to result in emotional comments,? explained Bernd Neumann, Germany’s Culture Minister. The reaction was, in other words, a far cry from the ?You had me at ?Hello?? greeting Cruise received in a much less contentious cinematic role.

Even if Germans are still suspicious of Scientology, there was obviously a thaw in their relationship with Tom Cruise and the makers of Valkyrie. Time reported that Germany initially denied Cruise use of the Bendler Block, yet in an apparent about-face, the German government not only allowed filming in the building, but the German Federal Film Fund provided $6,000,000 US in financial support for the project. (The German government routinely helps to fund films made in Germany).

Furthermore, the last surviving member to the bomb plot, Philipp von Boeselager, the man who procured the bomb, indicated in an interview with Germany’s Stern magazine shortly before his death May 1, 2008, that he had no problem with Scientologist Tom Cruise portraying Stauffenberg, as long as the actor did not proselytize.

Clearly, having received permission to portray the attempted coup on location in Berlin, in spite of Germany’s official and unofficial hostility toward Scientology, Cruise himself produced something of a coup. In making this film, is it possible that Cruise was?like resistance hero Stauffenberg?attempting to bring about a change in German policy? Could this lead to a greater public acceptance of Scientology within Germany?

Regardless of our feelings about Tom Cruise or Scientology, it is easy for English-speaking audiences to identify with the plotters in the film. That probably has something to do with the fact that, although the principle characters are all associated with the German military, they have American or British accents. Thus, Stauffenberg, a German count and Wehrmacht officer, along with his fellow conspirators are all transformed into good Anglo-American allies. Their speech is so stripped of ?Germanness? that Cruise even mispronounces Goebbels? name. It was therefore amusing to see that the closing credits actually include a ?Dialect coach.? A standard Hollywood stereotype (or rather bigotry) is reinforced, nevertheless, with only the evil people having German accents.

In spite of the film’s shortcomings, Cruise is convincing as the maimed Stauffenberg, determined to end Hitler’s regime even if it requires a daring act that puts him, his co-conspirators, and his own family at risk.

With themes of conspiracy, high treason, and a political assassination, this film has the feel of an action film reminiscent of Mission Impossible. Yet it takes on a historical subject, without sacrificing accuracy. Valkyrie’s fast-paced plot, accompanied by a musical score that is at times like a ticking bomb or a speeding train, is riveting and exhilarating. We already know that the conspirators are doomed to fail, yet the film gives audiences a gripping, suspenseful, and tension-filled ride.

And, as Valkyrie heads toward its inevitable release on DVD, it will be just as interesting to see, in the long run, how this film influences the way in which Germans view Tom Cruise and Scientology.