?Squeezing Rhymes Through the Stencil of a Prejudiced Mind?

?Shelving words by the letter, lining up syllables better, being setter of bones of reality, the tones of the t’s and the a’s and the e?s, oh please!

from ?Words? by Flinn and Nasr, New Teeth on Stage

Although Ariana and Andy describe themselves as merely ?potluck? Quakers (see Voice interview this issue) Ariana did come from a Society of Friends family. Now knowing this, I can’t listen to T@b’s music without thinking of all those people who went to prison in England centuries ago for refusing to doff their hats to nobility.

Because of their frequent incarcerations Quakers became great reformers of the prison system and other bastions of human cruelty.

Plus, it eventually became okay for everyone not to take off their hats in the presence of Lord or Lady Diddly-Squat.

You can’t deny the mysterious influence of centuries of Quakers on the songs in New Teeth on Stage, especially, I think, on ?White Man God.?

In addition to their own songs they do a few numbers by friends, and they’ve chosen carefully. Jack McDonalds’s ?Bluenose Cowgirl? is a song to which any westward-yearning Maritimer can relate. 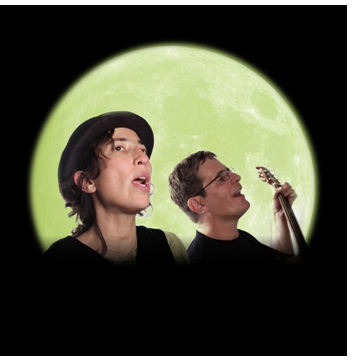 The bluegrass element, so integral to Fundy Shore Nova Scotia music, comes out strongly in Ariana’s fiddle playing in ?General Store? by Jenny Ritter. And Chris Robinson’s delightful ?Learning the Hard Way? is rendered magical by the treatment it gets here.

Andy’s vocalized song rhythms, a cross between scatting and beat-boxing, are almost an extenuation of a Swiss accent in which every ?r? is a drum roll and vowels and consonants are annunciated in the extreme. You will probably not hear musical accompaniment like this anywhere else. Ever.

?Shopping Mall,? an exercise in modern angst accompanied by a rolling Professor Longhair piano, is a post-consumerism hymn that you could found a church on if you believed in founding churches.

?Intertwined,? a twisted tribute to the gluteus maximus, is no Queen rock anthem?It’s something much more deeply satisfying, and on so many levels.

If you listen real hard you’ll hear how minimalist the accompaniment really is, but even with just two or three instruments and two voices each song is busy with tantalizing sounds.

I’m a jazz gourmand?not gourmet?but I hear in this music the transcendent quality found in Miles Davis, Dave Brubeck, and John Coltrane; that capacity to lift the stupidity of this broken world and take it right out of the picture.

One of The Mindful Bard’s criteria is that a work should stimulate the imagination and inspire the creation of more art. Well, it may be a coincidence, but I started two poems while listening to this CD, something I haven’t done in over a year.

As if it weren’t enough to manifest an amazing creative force, Ariana Nasr and Andy Flinn are at the vanguard of a global and local movement to transform the music industry from a castle fortress to a sprawling, thriving, peasant village. Their contagious excitement is fully justified; just check out AMP Festival, Night Kitchen, and Tab Music to see for yourself.

New Teeth on Stage manifests 10 of The Mindful Bard’s criteria for music well worth a listen: 1) it is authentic, original, and delightful; 2) it mocks existing injustices; 3) it renews my enthusiasm for positive social action; 4) it makes me want to be a better artist; 5) it gives me tools which help me be a better artist; 6) it displays an engagement with and compassionate response to suffering; 7) it inspires an awareness of the sanctity of creation; 8) it is about attainment of the true self; 9) it provides respite from a sick and cruel world, a respite enabling me to renew myself for a return to mindful artistic endeavour; and 10) it stimulates my mind.