Articles
The Voice
In Conversation With . . . Andy Flinn of T@b, Part II

They’ve also made a name for themselves as music promoters, offering local musicians a venue in Night Kitchen, their weekly variety show in Wolfville, and the AMP (Acoustic Music Producers) festival.

You can read the Voice review of their new live CD, New Teeth on Stage, here. The following are notes from the second part of a conversation between T@b member Andy Flinn and Wanda Waterman St. Louis.

Part II: The Care and Grooming of an Insurgent Songwriter

What Do You Need to Be Creative?

We probably need some space. And each other.

We need Wolfville. I think there is no higher density of artists per capita than here in Nova Scotia. What we like about Wolfville is the community thing. We feel pretty damn stimulated by this town in terms of gender, society, alternative economy, alternative growing. Most of our friends are second generation hippies.

I don’t think we’ve ever flourished artistically as much as we have in the last three years. Wolfville is certainly more stimulating than Toronto was. In Nova Scotia you can’t piss somebody off or burn your bridges because there’s plenty of others out there who can pull the same stunts on you.

The urban environment is very forgiving of social dysfunction; in Toronto we could have gone on and on with our shoe-gazing, but here we basically have to get along with everybody, and It’s cool. We discovered stuff here that we didn’t know we needed.

The Thunderings and Rumblings of a New Music Economy

We’ve talked to artists who came, say, from Montreal, to play at festivals here and they’ve said, ?Yeah, we were paid two thousand dollars to get here and we spent seventeen hundred on the flight.? Then there were other expenses. So the military-industrial complex ended up with 80 per cent of the grant money for the festival and the artist only got 5 per cent. 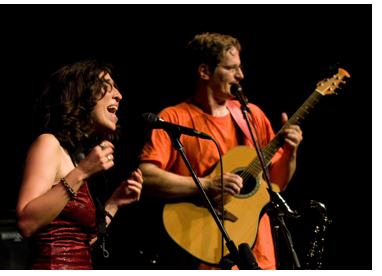 This is a new baby. Basically It’s a Night Kitchen on steroids. It has the same pay scheme as Night Kitchen except all performers are recorded on a digital 8-track, shot with multiple cameras. Like Night Kitchen no one gets a set larger than three songs.

We favour local artists in that we don’t pay for travel. Your own community is the most stable network in your life. If somebody is in that phase of their lives when they wander and happen to pass by, then You’re likely to be very welcoming, but you probably won’t accept the financial burden of Air Canada shipping them from there to here.

At the AMP Festival everyone has to play original music, because That’s not legally encumbered, and all performers sign a release form to allow all the professional photographers to use the pictures any way they want.

Also, the photographers sign a release allowing the performers to use their photos for CD covers, etc., without paying. And the performers don’t have to pay a sound engineer to record them. It’s basically a barter framework of artistic services.

It’s like creative commons, only event-bound. It’s only one event, but unions form: a photographers union, a musicians union, an entertainment-staff-and-door-people union, and they all sign up for an AMP accord. With this you can now upload stuff to YouTube that is 100 per cent legally publishable.

The website doesn’t look as subversive as the concept is.

The Care and Grooming of an Insurgent Songwriter

I really despised war, but I was raised a soldier. I was drafted into the Swiss army when I was 18 or 19. And soldiers are people too, right? It takes decades to get over that kind of thing.

Then I met Ariana, who came from a Quaker background. they’re a bunch of pacifists. At the time that I met her, this was the only organized religious group that never offended her, that didn’t have a sour taste for her. And none of us is really a Quaker because Quakers don’t evangelize. Ariana and I are potluck Quakers at best, but we love those guys and we go to their weekends. We do music with the kids while the adults do their business meetings.

Our biggest fans are toddlers, interestingly enough. Toddlers, I think, are more open-minded. A lot of our friends have kids and they’re always being exposed to our music, at farmers? markets and at Night Kitchen. There’s never a Night Kitchen where you don’t hear a baby howling.